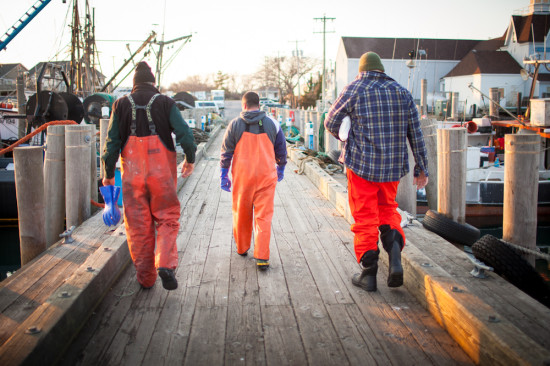 For so long chefs have ordered fish the same way they order salt, butter or flour: see how much they need, check if the supplier carries their favorite brand and then pick up the phone. Most of the time it comes the next day, especially for busy restaurants in the middle of the city. The menu dictates the order. It wasn’t always like this; chefs used to rely on fishermen who came to their kitchen doors offering what was local, plentiful and in season. Then they wrote the menu. It put excitement into preparations: a little surprise to get the creative juices flowing.

This past winter six chefs in New York returned to this model by signing up for the inaugural season of the country’s first restaurant-supported fishery (RSF), a program birthed and reared — with many midwives — by Sean Barrett of Dock to Dish.

“The whole idea was to be a change in the marketplace,” he says, back to the way the fishermen out of Montauk have been doing things since the first hungry settler put a skiff in the water, when supply came before demand.

The chefs — Dan Barber of the Blue Hill restaurants, Bill Telepan, April Bloomfield, Eric Ripert, Francis Guzman of the Modern and Joe Realmuto of Nick & Toni’s — each welcomed the challenge in their own way, by incorporating the fish, which was delivered weekly, into their existing menus or by creating specials that tended to rely on crudo, or raw fish, because it was so fresh. The ability to obtain such fresh fish — Dock to Dish guarantees delivery within 24 hours of landing — was high on the list of reasons why the chefs opted into the program. But few chefs buy anything anymore without considering the effect on the environment and the relationship to the person who actually grew, brewed or fished it. Dock to Dish covers all these bases because sustainability, in all its forms, is part of its business model: Barrett is as concerned about guaranteeing a revenue stream for rod and reel and spear fishermen as the happiness of the customers who end up with a piece of Dock to Dish seafood on their plate.

For Dan Barber the larger issue of the state of the fisheries was a main motivation. “You could just stop eating fish,” he says, to prevent fishery collapse, but that doesn’t work for him sitting in the middle of a kitchen. So he sees Dock to Dish as a solution. “We’ve got to support the community of fishermen who know what they’re doing by figuring out a way to balance the sustainability of the ocean and the maintenance of a community,” he says. “I’m pro fisherman, not just fish.” 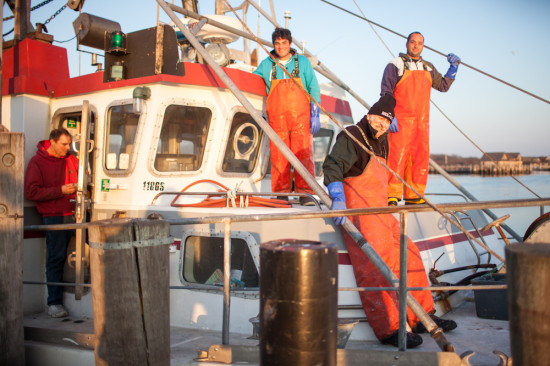 Fishermen are something Barrett knows a little about. A lifelong recreational angler, he has cultivated relationships with the commercial guys casting off from Montauk Harbor and now has a roster of captains who know they are assured payment and sleep well knowing Barrett cares as much about the fish as they do.

“I save my best fish for Sean,” says Bryan Fromm, who uses a green stick and follows a strict landing regimen to catch bigeye and yellowfin tuna from his vessel, the Flying Dutchman. The green stick is a fishing rod developed in Japan used expressly for tuna. Rising 40 feet off his deck, Fromm’s green stick uses high-test line to catch one fish at a time thus reducing bycatch and making it easier to bring the fish in. At the end of the line is a plastic squid that skims the water. The motion attracts the fish. Over the years, Fromm has developed a protocol that keeps his catch in its purest state. The tuna is killed and bleeds out while still in the water, which prevents the build up of lactic acid and the toughening effect that bouncing around live in the bottom of boat can have on the flesh. Once in the boat, the fish remains in the same position while it is field dressed and a wire is run through its spine to eliminate any further movement. The cavity is scoured with a wire brush and then the carcass is packed in ice and seawater; it will not move again until Barrett picks it up.

“I love tuna fishing so much,” says Fromm. “I love the adrenalin rush; tuna is the hardest fish in the ocean to catch, and when you get out there the water’s blue and you see all sorts of stuff you don’t see on land: whales, porpoise, manta rays. It gets real deep; it’s so beautiful. Every time is different.” 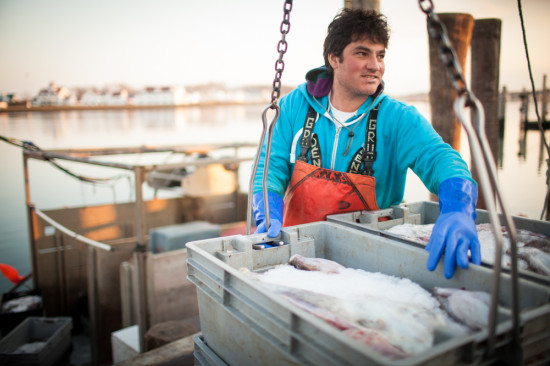 Fromm’s enthusiasm matches Barrett’s, one of the most enthusiastic people I’ve ever met, who is also a fount of wisdom on the state of the fisheries, the Magnuson-Stevens Act, different species and fishing gear that produces the least bycatch. The fish business also requires navigating an overlapping maze of regulations at the state, regional and national level as well as local requirements such as licenses and inspected processing facilities.

A pledge to follow all the rules was also a part of Barrett’s business plan, and for this he had the help of Jeremy Samuelson, an ecologist who is the executive director of Concerned Citizens of Montauk (CCOM), a conservation nonprofit with an emphasis on the water that surrounds it on all sides. Nearly 70 percent of the land in Montauk is preserved, so CCOM has dedicated itself to the fisheries, groundwater and surface water quality, coastal erosion and coastal policy. In this mix Samuelson saw the value of a community-supported fishery (CSF). He was not the only one to have the idea around the same time. Nearly concurrent discussions with Barrett and Rudolph Bonicelli, a Montauk fisherman, gave the idea critical mass. Soon CCOM helped Barrett secure a $55,000 grant with $55,000 in matching funds from the Fisheries Innovation Fund of the National Fish and Wildlife Foundation to create a CSF and to produce a guide so others can establish their own with the same sustainability goals as Dock to Dish.

“We call it the s-word,” says Samuelson of sustainability. It’s an overused term but still essential to the operation’s success. Like Dan Barber, Samuelson and Barrett know fisheries won’t thrive until all elements of the equation are in balance. “When we say sustainable we look at the whole process,” he adds. “You can buy some fish from the Pacific and it can be healthy for you and caught sustainably, but then it sits frozen on a shelf for a week before you eat it. We’ve been backed into a system that doesn’t allow us to ask the right questions. We need to know ‘What am I eating? Did the person who caught this get a fair price and how did it get here?’ ”

“What am I eating?” is a question central to the work Paul Greenberg has been doing as a writer about seafood. His book Four Fish: The Future of the Last Wild Food, published in 2010, chronicled the possibility that our generation might be the last to eat fish caught in the wild. Greenberg’s new book, slated to be released in June, American Catch, focuses on the fact that 91 percent of the fish Americans eat has been imported and probably mislabeled. “Fish for a long time has been in this commodity stream,” he says. “Faceless and originless, which leads to not a really intimate relationship that we should have between the diner and the food they’re eating.” Such a relationship would make consumers more invested in the state of our fisheries, including the all-important estuaries, which have been collapsing at an astonishing rate, he says. Early Americans ate fish pulled from the waters close to shore. “You wouldn’t see a lot of tuna on a 19th-century menu,” he says. “There was shad, sturgeon and salmon. That speaks of a ruined relationship with our local estuaries.” 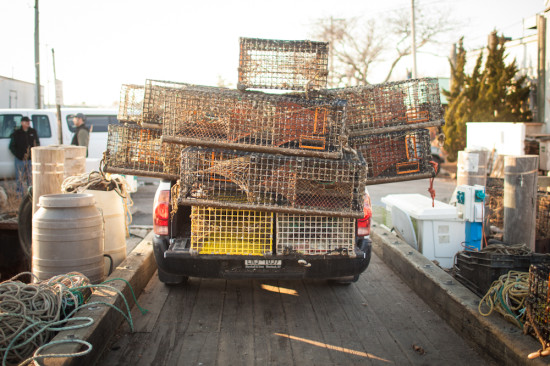 That’s one reason Greenberg is a fan of CSFs and RSFs. “Anything that puts fishermen more directly in contact with the market is good,” he says. “The shorter the supply chain, the more money goes into the pockets of fishermen, which hopefully gives them less of an incentive to overfish.”

This is also on the mind of Tim Fitzgerald, the sustainable seafood director of the Environmental Defense Fund, which puts a considerable amount of its nonprofit might behind the reestablishment of threatened fisheries. The empowerment of fishermen who know they are going to get paid before they cast off into a sea of uncertainties — like the scariest, the weather — is enhanced when their product is put directly into the hands of chefs.

“It’s so important because it takes sustainability to scale in a way that’s really hard for CSFs to do,” he says, adding that chefs are more likely than individual consumers to take unfamiliar and less fashionable fish and to take them whole. They also can cash in on the so-called trash fish trend, where sea robins are taking away plate space from salmon fillets.

The chefs that participated in Dock to Dish’s RSF knew they were going to pay a premium for fresh, sustainably caught and ecologically conscious seafood. Each was guaranteed at least 50 pounds per week at about $12.50 per pound, and their customers were willing to pay for it. Joe Realmuto of Nick & Toni’s says each time he put Dock to Dish fish on the menu it sold out before the second seating. Part due, no doubt, to the quality, but also to the enthusiasm of the staff, bolstered by the question-and-answer sessions hosted by Barrett before service that outlined Dock to Dish’s goals and practices, and the excitement of deciding what to do with 50 pounds of squid on the fly.

“It’s a cheap inexpensive thing that was so fresh,” says Realmuto, adding that most restaurants get their calamari already cleaned and frozen. “We sautéed the tentacles and then stuffed it with shallots, garlic, bread crumbs, pine nuts and currants and then grilled it off.”

The menu just wrote itself.