In her just-out cookbook, Bloomfield reveals that if it weren’t for this simple purée, she wouldn’t be where she is today. 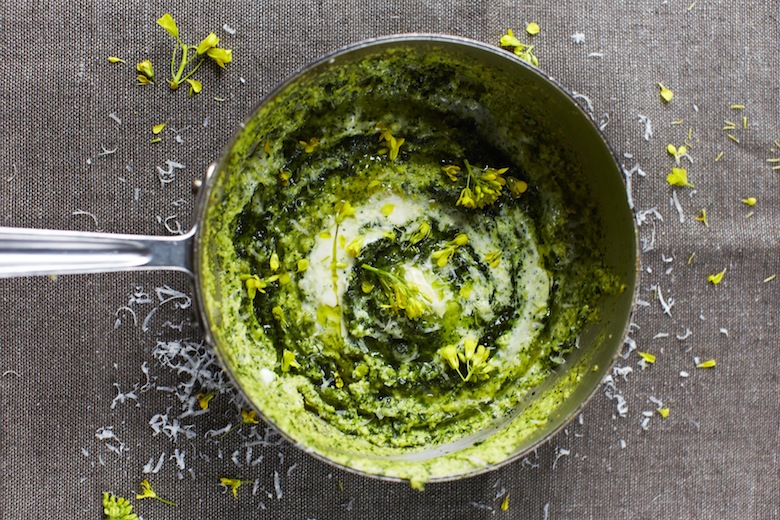 If you could have bought stock in kale back when Bloomfield was first learning to cook, you’d be a billionaire. Photo courtesy of Ecco.

If I asked you what single dish set April Bloomfield on her path, you’d probably guess something with lamb belly or guincale. Here’s what you wouldn’t guess: kale purée.

Since opening Spotted Pig ten years ago, Bloomfield’s cast a carnivorous spell with the likes of pig-ear salad, liver on toast, rillete with mustard and that ever lettuce-less burger. Little wonder she’s soulmates with her homeland’s most iconic nose-to-tail chef, Fergus Henderson.

But in her just-out cookbook, A Girl and Her Greens, Bloomfield reveals that if it weren’t for a simple kale purée — which she saw being made “on the telly” back when she and that leafy green were on precisely nobody’s it list — she wouldn’t be where she is today. Lucky for us, the young Bloomfield, wondering what to do with herself, happened to catch a BBC program showing Rose Gray and Ruth Rogers, the chefs at London’s River Café, making the four-ingredient purée to toss on some penne. “They were accomplished cooks, but the food wasn’t complicated at all,” she recalls. “I wanted to cook like that.”

So she called up River Café and talked her way into a job. The rest, as they say… well, you know. Today she’s one of the most important chefs in the world. And if you could have bought stock in kale back then, you’d be a billionaire.

I can’t wait for spring to get serious so I can cook the book’s recipes for watercress soup, snap-pea salad, whole-roasted turnips, radish-kimchi-sesame salad and, come summer, salad sandwiches. True to her larder, Bloomfield’s book includes hasselback potatoes with lardo and sweet potatoes with bone marrow, but fiber-philes will delight in broccoli raab for breakfast and something called, wait for it, cabbage-stuffed cabbage.

Meanwhile I’ll stir up one of her polenta variations, made bright green by the simple kale purée that started it all.

Put 4 of the garlic cloves in a medium pot, fill it with water, cover and bring the water to a boil over high heat. Add enough kosher salt so that the water tastes slightly salty and add the kale, prodding to submerge it. Cook uncovered until the kale is tender and tears easily, 2 to 3 minutes.

Fish out the boiled garlic cloves and reserve. Drain the kale in a colander and, when it’s cool enough to handle, squeeze out as much water as you can. Roughly chop the kale, the boiled garlic and the raw garlic.

Combine the kale, garlic and Maldon salt in a food processor. Process, stopping occasionally to prod and stir, for about 45 seconds, then add the oil and process, stirring once or twice, to a fairly smooth purée. When I make this at one of my restaurants, I use a Vita-Prep to make the purée silky smooth, but I like a slightly coarse purée too. The purée keeps in an airtight container in the fridge for up to 5 days.

In the U.S., polenta is typically served as a side dish. But in Italy, it is often the main attraction — a real show-stopper. I’ve been seated at a table with friends when the cook arrived from the kitchen with the pot of polenta. Instead of ladling the polenta onto our empty plates, as I first expected, the cook poured the polenta from the pot straight onto a wooden board in the center of the table. Steamy and inviting, it crept outward like hot lava.

This take on polenta is a show-stopper in its own right: its striking green color is beautiful and unexpected. It’s so stunning you can skip the board and just haul the pot to the table. The healthy dose of kale purée that colors the cornmeal adds lots of flavor, too. You taste the sweetness of the corn polenta first, then a hint of garlic and finally that green minerality of kale at the end.

Combine 7 cups of water and the salt in a medium pot and bring the water to a boil over high heat. Gradually add the polenta, whisking as you pour. Keep whisking until the polenta starts to thicken and looks like it’s one with the water, about 2 minutes. Turn the heat to low (the polenta should steam and tremble, but only rarely erupt with bubbles) and cook, stirring every now and again, until the polenta is tender but still coarse in texture, about 45 minutes.

Stir in the olive oil, kale purée and most of the Parmesan and keep cooking, stirring occasionally, for a few minutes more. Take the pot off the heat and fold in 2 tablespoons of the mascarpone (it’s nice to run into a little pocket of mascarpone, so don’t stir too much). Top with the remaining mascarpone and Parmesan and as much black pepper as you’d like.