While reporting our Gramercy Tavern feature three years ago, we were so bowled over by pastry chef Nancy Olson’s piled-high New York State apple pies that we put it on our cover. And now, we finally have the recipe. 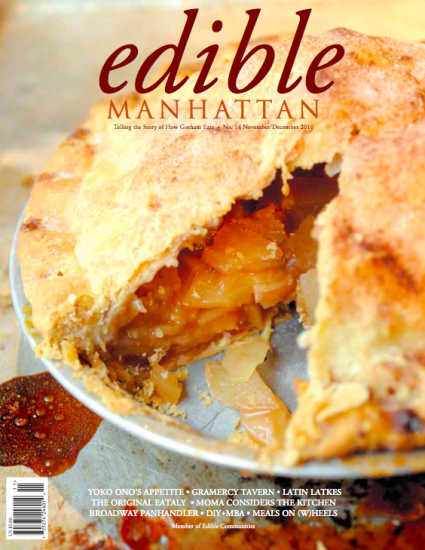 The big Gramercy Tavern profile we ran three years ago remains one of my favorite stories I’ve ever edited—and Gramercy remains one of my favorite places I’ve ever sat down for dinner. So imagine my delight to get my hands on the just-released Gramercy Tavern Cookbook, by chef Michael Anthony—whom a Danny Meyer staffer called the nicest person to ever don chef’s whites—and produced by the almighty Dorothy Kalins, founding editor of Saveur. They done good.

The book’s recipes are sophisticated – after all, the restaurant was hailed by James Beard judges in 2006 as best restaurant in the country—but they’re also accessible enough for the home cook, from sea scallops with grapes and verjus to kale salsa verde and bacon-cheddar biscuits.

But this is much more than a cookbook. The interspersed essays—on everything from Gramercy’s custom-grown heirloom garlic to their famous forager, Modesto, to the man who painted the murals to the art of curing meat— together pull back the curtain on a very different kind of recipe: the ingredients and processes that create Danny Meyer’s interpretation of Yankee taproom. It’s a place where, as we wrote, “George Washington himself could feel at home, cozily canoodling at the bar over a pint of stellar craft beer, a plate of icy cold East End oysters, a bit of housesmoked trout topped with pickled onions, or a crispy-skinned squab atop thin rounds of late-season squash and big buttery shell beans. If old George could score a stool in the perpetually packed place, that is: Unlike the dining room, the 50-seat bar doesn’t take reservations.”

While reporting and shooting that story, we were so bowled over by pastry chef Nancy Olson’s piled-high New York State apple pies—let the cinnamon–creme fraiche ice cream start its melt into your slice before you take a bite—that we put it on our cover. And now, we finally have the recipe.

“If you’ve tasted a better apple pie, please tell me where, because I’d put Nancy’s apple pie up against any in the nation! She has such a special touch in the way she handles ingredients. When you taste the crust, you just imagine her hands working the dough. While you can certainly make this pie with just one kind of apple, we suggest a combination of flavors and textures, such as Winesap, Mutsu, and Honeycrisp; Fuji and Granny Smith are also great. Nancy piles the apples amazingly high when building this dessert. They cook down into the most wonderful, intensely flavored pie.” -Chef Michael Anthony

Preheat the oven to 400˚F, with a rack in the bottom position.

In a large bowl, whisk together the sugar, cornstarch, cinnamon, and salt.

Add the apples to the sugar mixture and toss thoroughly. (We combine the apples with the sugar at the last minute so the mixture stays drier and doesn’t weight down the dough.) Pour the apple mixture into the dish. We call for just the right amount of apples.

Don’t be afraid if you see them piled high. Cover with the remaining dough circle, then trim the excess dough, and crimp the edges.

Cut about a dozen slits all over the pie. Sprinkle liberally with sugar and cinnamon and place on a baking sheet lined with aluminum foil. (This way you needn’t worry about any juices that may bubble over.) Bake until the crust is golden and the filling is bubbly, 65 to 75 minutes. Transfer the pie to a rack and serve warm or at room temperature.

Sprinkle ¾ cup of the ice water over the flour mixture and gently toss to incorporate. Use a rubber spatula to push the dry flour into the liquid, but do not stir the mixture. This gentle process of “hydrating” the flour without stirring makes all the difference. If the mixture is too dry and won’t come together when you gently squeeze a handful, sprinkle with another tablespoon of water and toss again. Continue the process until the dough just holds together, adding as little water and handling the dough as little as possible. Some dry patches and crumbs are okay— they will moisten as the dough rests.

Divide the dough into 2 balls, flatten into disks, and wrap well in plastic. Refrigerate for at least 2 hours, or overnight. The dough can be frozen for up to a month; thaw overnight in the refrigerator.