Once a year, nutmeg goes from unsung hero, to center stage, providing an indispensable seasoning to holiday staples from eggnog to pumpkin pie. 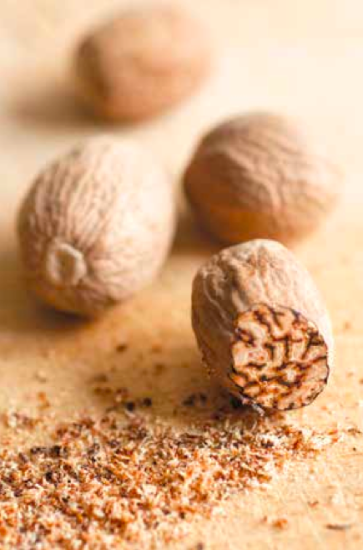 For most of the year nutmeg is an unsung hero, playing backup on creamed spinach and rice pudding. But during the holiday season this spice takes center stage, providing an indispensable seasoning to holiday staples from eggnog to pumpkin pie.

Although this spice is typically associated with holiday cheer, it has a dark past with surprisingly deep connections to the island of
Manhattan.

If you think heading to Flushing in search of Sichuan peppercorns is a long haul, consider that, for centuries, intrepid explorers circled the globe seeking out exotic spices that were often valued more highly than gold. In the 15th and 16th centuries, those aromatics spurred exploration and shaped colonial empires.

European powers vied for control of spice trade routes and conquered remote spice-producing regions. Cloves and peppercorns were in high demand, but nutmeg was one of the most sought-after seasonings. The seed of the Myristica tree, nutmeg is indigenous to the Banda Islands of Indonesia. Highly coveted for its flavor, it was also considered an aphrodisiac and hallucinogen and was believed to ward off the plague.

During his first circumnavigation of the globe, Magellan lost four of his five ships and more than 250 men—but he returned to Spain with over 50,000 pounds of cloves and nutmeg, and his trip was heralded as a commercial success.

By the 16th century, European traders were selling nutmeg at a 6,000 percent markup. So it’s no surprise that colonial powers vied bitterly for control of the Banda Islands, the only place on Earth where this spice could be found.

In the early 17th century the Dutch seized control of Banda from the Portuguese and brutally murdered thousands of natives to ensure Dutch influence on the nutmeg trade. Farmers from Holland were brought in to run plantations, and nutmegs were coated with lime before export, preventing enterprising farmers from sprouting the seeds. The Dutch brought new meaning to toasting spices when they burned their nutmeg-filled warehouses in order to regulate price. But attempts to maintain a total monopoly on the nutmeg trade were thwarted by the British, who controlled Run, a tiny island in Banda, lush with nutmeg trees.

Turns out that another island, halfway around the world, would be the key to securing Dutch control of the nutmeg trade. New Amsterdam—aka Manhattan—was Holland’s key colonial outpost in the New World. In 1664 the British seized New Amsterdam, and the Dutch responded by waging war. The conflict ended in 1667 when the British agreed to give up Run in exchange for all of New Netherlands; the British threw in some sugar plantations in Surinam to sweeten the deal. The Dutch consolidated their cartel on nutmeg and New Amsterdam became New York.

Throughout the 19th century nutmeg continued to be highly coveted. As with many of today’s food fads, nutmeg’s popularity in colonial New York quickly led to knock-offs. Unscrupulous spice traders passed off phony wooden nutmegs to unsuspecting customers; Connecticut’s peddlers became so adept at these forgeries, it earned the nickname “the Wooden Nutmeg State.”

While your pumpkin latte wouldn’t be the same without nutmeg, it’s questionable if the Dutch really got a good deal. Today, it would cost about $90 million to buy an acre of land in Midtown—far more than a few nutmegs.