Francesca Chaney of Bushwick’s beloved SolSips recently cooked a dinner in honor of the legendary chef. 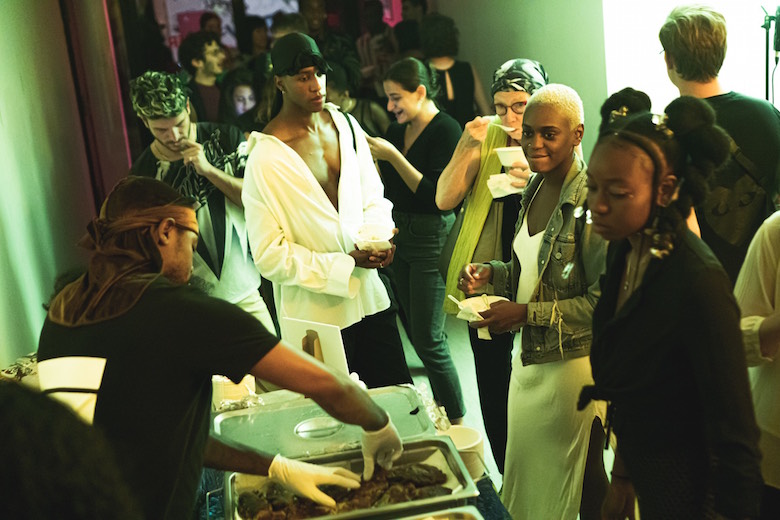 When Francesca Chaney founded Sol Sips nearly two years ago, she felt like she was creating the blueprint for her life from scratch. She was 21 years old and opening an organic vegan cafe in a swiftly gentrifying neighborhood with the goal of making plant-based food more accessible. A 2019 Eater Young Gun award winner, Chaney works to redefine wellness for low-income communities of color in Brooklyn by offering sliding scale brunch and a plant-based menu that unites health food and comfort food influenced by her Caribbean ancestry.

With the struggles of early business ownership behind her, new challenges unfolding and another restaurant concept on the horizon, Chaney no longer feels like she’s doing it alone but instead builds  upon a foundation laid down by Black women restaurateurs who came before her, whose stories she wants to make more visible to ensure their legacies don’t fade into history unnoticed. 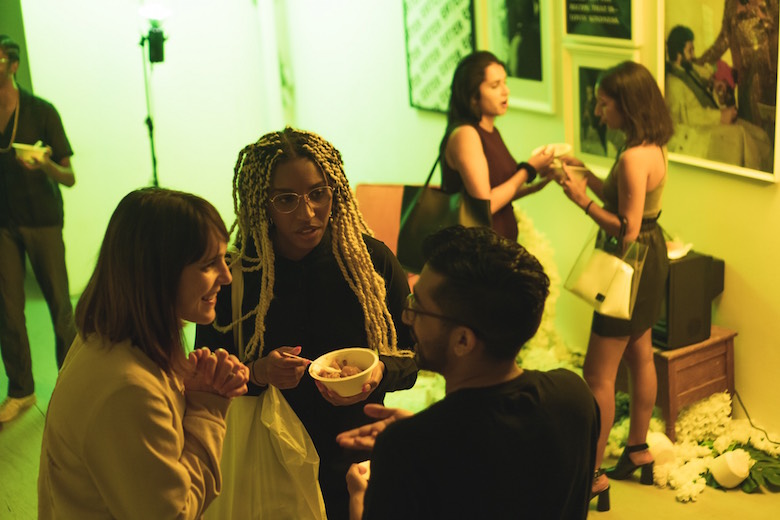 Guests mingling at the dinner. Photo by Ryan Muir.

Last month, Chaney collaborated with Eater and DeVonn Francis, founder of Yardy and ‘18 Young Gun, to honor the work and life of Princess Pamela who opened an acclaimed soul food restaurant and jazz salon, The Little Kitchen, out of her Alphabet City apartment in the mid-1960s.

“At a time in 2019, where I’m being celebrated for being a Black woman business owner and for cooking with spirit instead of measurements, it means a lot to know that there is someone that did this already with less resources and before the internet,” Chaney tells me. “I understand the trials and triumphs, so for her to be able to hold it down for 30 years is incredible to me. It’s made me trust and appreciate my journey more, however it manifests.”

The legacy of Princess Pamela remained largely unknown to folks in and outside of the culinary world until her cookbook Princess Pamela’s Soul Food Cookbook, written in 1969, was reissued by Matt and Ted Lee through Rizzoli New York in 2017. Prior to the cookbook’s re-release, food writer Mayukh Sen penned a James Beard Award–winning profile of Pamela, which helped to exhume her iconic style, culinary expertise and untimely disappearance from dusty archives of food historians and waning memories of folks who knew her personally, propelling Pamela’s story into today’s mainstream readership.

“I’m grateful that my story is still introducing Princess Pamela’s name to so many people, prompting deeper interrogations of her legacy, and inspiring such varied interpretations of her work,” Sen writes over email. “Like Princess Pamela before her, Francesca is using her food to create space for populations ignored so often by our food establishment, and she’s doing so with intention and care.”

“The seasoning was spot-on,” said one of the guests, Talicia Jackson who goes by @foodiewithafro. A pescatarian, Jackson has been looking for ways to incorporate veganism into her daily life. “Those mushrooms could be a substitute for fried chicken any day, and I’m saying that about a mushroom which is crazy to me,” she laughs. “When you taste stuff like that, it makes you think, maybe I don’t need animal products.”

Originally from the south, Jackson was impressed by the depth in flavor of Chaney’s potlikker (the collard greens sauce) that omitted the standard smoked pork or turkey. “I just wanted to spoon the liquid on the grits,” she mused, which is what people began doing as food supplies dwindled midway through the night. A hearty peach cobbler prepared by How Delish, a local Black-owned vegan dessert company, ended the meal on a sweet note. The cocktails continued to be poured as a live jazz band—a curation of Chaney’s favorite musicians and vocalists from Brooklyn—played a set inspired by Princess Pamela’s performances.

Princess Pamela’s recipes are not vegan-friendly at first glance, but the ethos behind her cooking is what matters most: preparing food with love that “that will lift the heart and fill the belly,” Chaney explains. It’s a shared bond that crosses generations even if the ingredients have changed. Pamela reminds Chaney of her own paternal grandmother who, when Chaney became a vegetarian at 15 years old, worked closely alongside her to recreate staple dishes without using meat. When her grandmother passed away last year, Chaney inherited her cookware which inspired her to dig deeper into Black Southern cuisine using plant-based ingredients.

Chaney stands out among the classes of Young Gun before her not just as a vegan chef, but as a Black woman. Eater has awarded Young Guns since 2012 and to date, there have been 130 winners, 53 percent of whom have been men and nearly 47 percent have been women. Although racial representation has increased over the years for non-Black people of color, Black food professionals, especially Black women, have largely been ignored. Only 3 percent of Young Guns awards have gone to Black men, and this year, Chaney and Ashleigh Shanti became the first Black women ever to receive the award in its seven-year run.

Chaney is drawing attention to the erasure of Black women by food media in decades past despite its lingering hold in 2019. The culinary gatekeepers who stifled Princess Pamela’s legacy aren’t so different from gatekeepers today who crowd the mastheads of legacy food media publications and continue to privilege rich white male Eurocentric perspectives.

“I worry that people who hold power in this industry see the work of surfacing stories of the forgotten and marginalized as a form of community service,” says Sen cautiously, noting the racist and homophobic disdain he has received from those who claim to value diversity. He’s hesitant to laud any radical transformation in the food industry that doesn’t include a dramatic shift in who holds positions of power. “It’s a better use of time to build alternate futures—say, publications outside of legacy media, like what Stephen Satterfield has created with Whetstone—than to expend energy trying to move the needle within arthritic institutions,” he reasons.

Chaney is also apprehensive of the industry but hopes that the upswing of visibility for Black, Indigenous and queer people of color will make room for more creative transgression of the current system as people lead from their own platforms, much like Princess Pamela did decades ago. “One of the things that DeVonn and I discussed was coming back to the roots of visibility, and what it looks like to be Black or a person of color within the food industry, or within any industry” Chaney said before a crowded room of people, bellies full and eyes shining. “And how we can push our stories to the forefront so that something like a legacy doesn’t disappear.”