Witness the work of committed chefs like Savoy’s Peter Hoffman, who wrote for us about enlightened fishing, and Gramercy Tavern’s Michael Anthony, who passes the praise for his spectacular sustainable cuisine to the farmers who grow the ingredients. 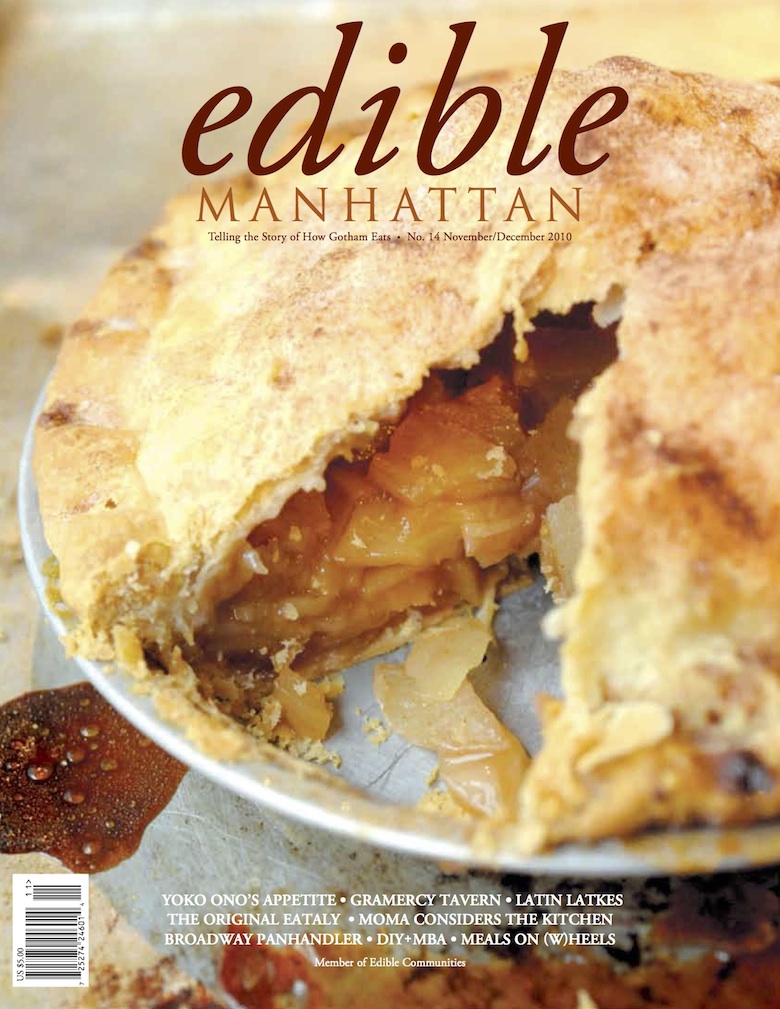 This December marks the 29th anniversary of John Lennon’s death on the Upper West Side. We marked the occasion by asking Yoko Ono about her eating habits; reading her answers and thinking about her late husband’s lyrics has put me in the mood to imagine.  I don’t know what Lennon would think of the food now on offer in the city he once called home, but a few stories in this issue made me feel that some things are, as he once put it, getting better all the time.

Take our feature on the bumper crop of entrepreneurs who have decided that the Great Recession is a great time to go into business selling small-batch food made by hand and cooked from the heart (much to the delight of the marketeers crowding the now weekly New Amsterdam Market, hungry for real food made by real people). Admittedly making a great product can be easier than making a profit; Bret Birnbaum of Wine Cellar Sorbets speaks for many when he reveals that he’s gone broke, but still believes in his product. You may say he’s a dreamer, but he’s not the only one.

I’m also inspired by the story of an unusual annual dinner enjoyed by one Upper East Side household. When a Mexican chef marries an observant Jew, the Hanukkah meal is transformed into a melting pot menu that sounds more delicious than the traditional dishes either side of the family might have cooked a generation ago. (To get Chef Medina’s recipes for jalapeno-flecked latkes, Negra Modelo–braised brisket on matzoh tortillas and sufganiyot donuts with dulce de leche filling, visit ediblemanhattan.com). Despite Lennon’s dream of no countries and no religion, even he might find this multi-cultural meal evidence that the world can live as one.

Back in the ’70s when Lennon lived here and preached peace, few could have imagined that fine dining could be a tool for change, but these days gastronomy and ecology intersect. Witness the work of committed chefs like Savoy’s Peter Hoffman, who wrote for us about enlightened fishing, and Gramercy Tavern’s Michael Anthony, who passes the praise for his spectacular sustainable cuisine to the farmers who grow the ingredients.  (His apple pie on the cover? I could eat it eight days a week.) Lennon also imagined a world with no need for greed or hunger, something the not for profit Citymeals-on-Wheels works towards by bringing meals to the homebound. I’d heard of their work but loved learning about the culturally appropriate foods they now deliver, like traditional tamales for East Harlem’s Latinos. Perhaps one day you’ll join them—the organization relies on volunteers for help.