Ode to a Toaster

In this little appliance I roast everything from apricots to zucchini, eggs to turnips, fluke to scallops — all without cooking myself in the process. 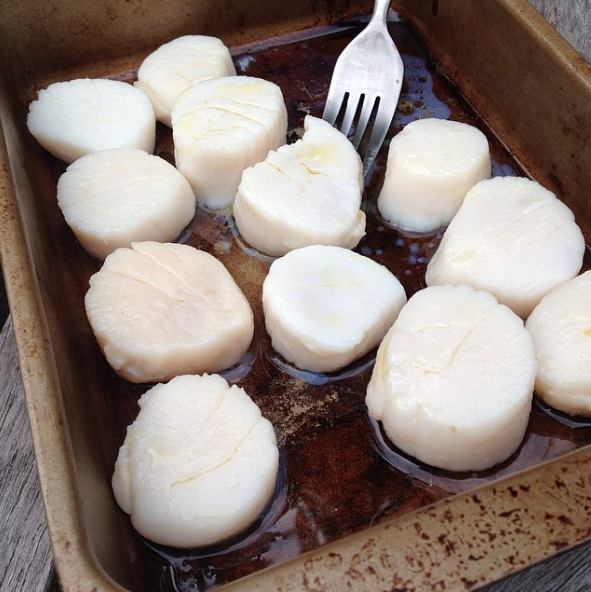 These scallops cooked in 5 minutes on the “dark toast” setting.

In August’s dog days when you wake up sweating, the sidewalk shimmers and the subway platform is 115 degrees, I almost lose my will to cook. That’s when I turn to the toaster.

Because while I love my oven, I just don’t want to crank it up to 350 degrees in high summer. Enter the toaster. It’s just a little Black & Decker, tricked out with a high-sided pan I probably picked up for $9, but in that little pan I bake or roast everything from apricots to zucchini, eggs to turnips, fluke to scallops — all without cooking myself in the process.

I was introduced to the cooking-in-the-toaster concept in 2001 by my then-boyfriend Tovey, who had a farm in the Catksills and a street-level apartment on Avenue B with a sink but no kitchen. Upstate each Wednesday he’d load up the truck with vegetables, drive south, deliver to chefs and then set up a little black-market sidewalk stand to sell a few more heads of chicory to the neighbors, long before Momofuku, Hearth, Northern Spy and Back Forty all opened within about a block.

For dinner and breakfast, we’d cook ourselves some unsold ingredients on foil in the toaster oven, baking duck eggs with shallots or roasting his inimitably flavorful tomatoes and sunchokes. I’ve never eaten so well as off those paper plates.

By day I worked at the Greenmarket office at City Hall and soon our whole staff was cooking up lunch in our corner toaster oven. The vegetarian office manager objected to our roasting fish in there, but with the incredible daily catch at our markets, who could blame us?

I took to evangelizing about cooking in the toaster, telling everyone the master recipe (foil, oil, broil) and even emailing Black & Decker beseeching them to pitch food writers to spread the gospel. Then one sweltering morning I opened the dining section and Melissa Clark took the words right out of my mouth: No One Ever Slaved Over a Hot Toaster Oven. Nailed it, of course.

I’ve since traded that farmer for another, and now, each summer, we eat every well, thanks to our toaster. Sometimes I even make toast in it.