Behold the Beauty That is the Winter Flea 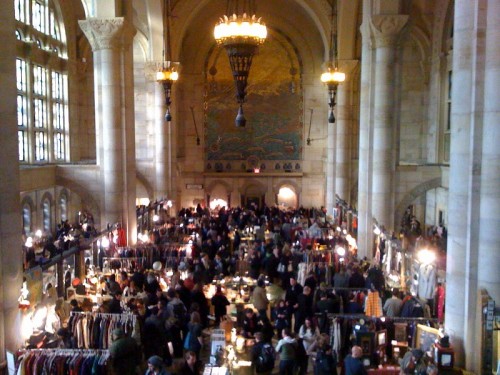 The Winter Flea, all Fancy For Winter: Woah, this ain’t no parking lot!

There’s no better reason to cross a bridge into the borough of Kings than to hit the Brooklyn Flea, which just this past weekend moved into its temporary home (till March) in the Williamsburg Bank Building, 10 a.m. to 5 p.m. both Sats and Suns. Which means you can take almost any train from Manhattan (‘cept for the F, sorry Lower East Siders) right into the base of the best weekend flea market in the city.

Indeed, perhaps half of the new products we profile in our sister pub Edible Brooklyn–pickles, granola, chocolate, bread, cheese, popsicles–can be found there, along with fish tacos, pupusas, tamales, damn fine coffee, lobster rolls and kimchee topped hot dogs. (Oh yeah, there’s also clothes, cameras, jewelry, furniture, records and what have you, too.)

But now it’s all inside the amazing bank building, which for many Brooklynites is the borough equivalent of the Statue of Liberty and the Empire State Building and the Chrysler Building all rolled up into one. The place hasn’t been open to the public for years, and that’s a shame because it’s a stellar space: massive arched ceilings lit by the sun, gold-flecked murals above, truly spectacular lighting fixtures, massive vault doors you can go in and out of, plus all the original detailing of the banking windows and stone tables where Brooklynites past tidied up their checkbooks.

Our only beef is that the food vendors are now all in that vault in the basement, which ruins some of the magical mix and match of food and music and clothes and knick knackery of the original outdoor flea. But that’ll be back by Spring, and until then, we’re gonna dress up like it’s 1929 each weekend–with clothes bought the previous weekend, natch–and enjoy our weekly pupusa at what’s gotta be the world’s fanciest flea.