Since Easter falls on 4/20 this year, we’re reappropriating #wakeandbake. 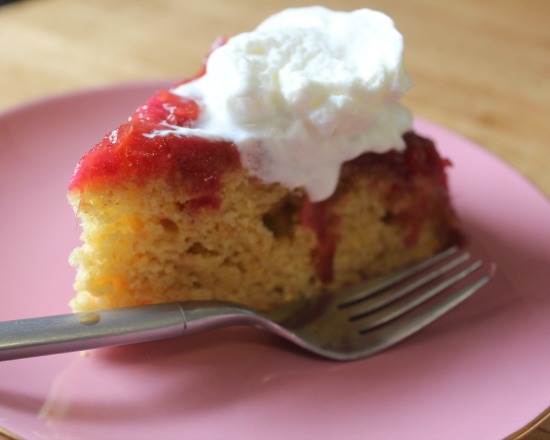 I’m reappropriating #wakeandbake. And since Easter is on 4/20 this year, there’s no better time to light up the oven in the morning.

I know what you’re thinking: who has the energy to do anything at the buzz of the alarm besides burn some toast? Well, it actually makes a lot of sense to roll out of bed and start baking. Once your puffs go into the oven, there’s a 30-minute window to shower, tidy, catch up on the news, etc. After it’s done, you have the freshest possible goods to enjoy solo, pass around the brunch table or take to work — I received high praise from all of my co-workers for this recipe and several other past #wakeandbake exploits.

This dish is bread and jam in one skillet, so that’s one less pot to clean. It goes well with sweet complements like a bowl of yogurt and contrasts deliciously with savory pork sausage. Rhubarb is only in season for a little while, so make this before the temperature starts to blaze. Blueberries would make a yummy switch once their season arrives. And you can buy bags of local New York Farmer Ground Flour corn meal at the farmers market.

If you need any more motivation, it’s also National Pineapple Upside Down Cake Day. Reappropriate that too.

And our sister pub Edible Brooklyn been featured in a genius online show about Gotham tokers called High Maintenance (get it?). Watch the short here. 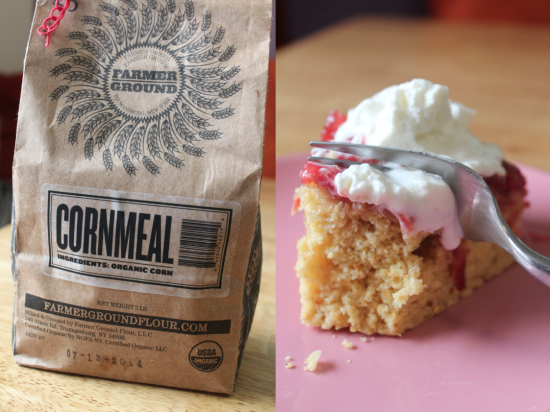 Melt butter in a large bowl. Beat in remaining 2/3 cup sugar and eggs until well blended. Stir in flour mixture and milk, until few lumps remain. Pour batter over rhubarb in skillet and gently spread to edges with a rubber spatula. Bake for 30-40 minutes until a toothpick inserted into the center comes out clean. Cool for a few minutes before inverting onto a large platter.