Broccoli rabe is harvested much of the year, but only in early spring is the overwintered crop available. 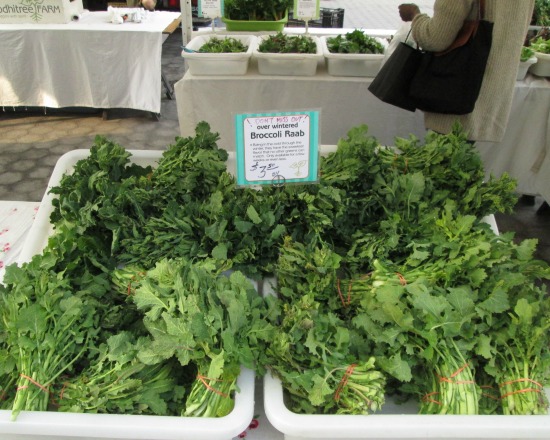 People get pretty worked up about ramps.

The foraged alium, also called “wild leek,” pops up on the forest floor each April and is one of the very first fresh green things at Greenmarket, beating even asparagus. Chefs go breathlessly bonkers, putting the onion-cousin, which is in the lily family and looks like a pink-shinned scallion, on everything from pizza to cocktails. There’s even a Twitter feed dedicated to the cult ingredient: @AmpedForRamps.

But while ramps incite a frenzy, they’re not the only vegetable in town right now.

“I want to cry when all anyone can talk about is ramps and they’re sitting right next to the very best spring vegetable, broccoli rabe!!” So says Liz Carollo, Communications Director for the Greenmarket. I used to work with Liz and I couldn’t agree more.

The bitter Italian green called rapini or broccoli rabe is harvested much of the year, but only in early spring is the overwintered crop available. The hardy green, planted last fall, doesn’t grow under the snow, but it doesn’t die either, and when the ice melts, broccoli rabe stretches its succulent legs. The stems are fat and meaty, and the leaves and buds are wise and sweet and spicy. Sure, in a few weeks, you’ll be able to eat the 2014 vintage, grown from seed, tender and lithe, but Greenmarketeers know that age brings flavor and that right now, the getting is good.

I spied bunches at Lani’s Farm stand at Greenmarket yesterday, but Migliorelli Farm is famous for the crop — after all, Ken Migliorelli’s grandfather brought the seed from the mother country a century ago. Which takes the term “heirloom vegetable” to a literal level.

Take a cue from Hearth: Blanch ’em, sautée em, serve as a side or on crostini, ricotta, polenta or pasta. Toast spring.

You can even throw in some ramps, if that’s your thing.

Broccoli rabe with chiles and garlic
From Salt to Taste: The Keys to Confident Delicious Cooking, by Marco Canora (Artisan)

Trim the broccoli rabe by cutting off the bottom of each bunch and then separating the leaves from the flower-topped stems. Snap off and discard the thin stems attached to the leaves.

Bring a large pot of salted water to a boil over high heat. Plunge the leaves into the boiling water. When the water returns to a boil, remove the leaves from the pot with a slotted spoon, cool them in ice water, then drain them well in a colander. Add the stems to the boiling water and cook until almost tender, about 2 minutes; then take them out of the pot, cool in ice water, and add them to the colander to drain.

Combine the peperoncini, garlic and oil in a large skillet and warm over low heat. When the garlic beings to color, about 2 minutes, add both the broccoli rabe leaves and flower-topped stems to the oil. Gently warm the rabe in the garlic-infused oil just until the stems are tender, about 5 monutes. Adjust the seasoning with salt and pepper and serve.