RECIPE: Panzerotti from I Trulli

For the Marzovillas, the son and mother team behind Puglia-centric I Trulli, putting their hometown specialty panzerotti on the menu was never in question. 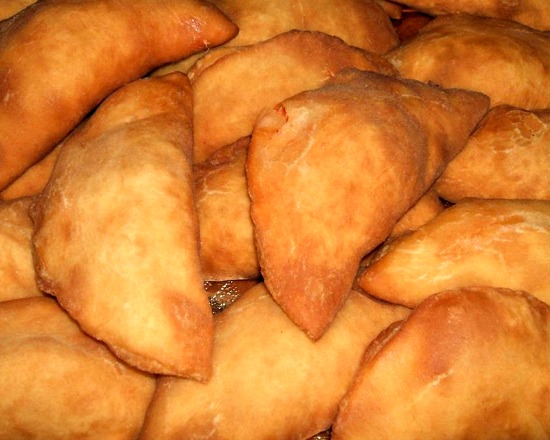 For the Marzovillas, the son and mother team behind Puglia-centric I Trulli, putting their hometown specialty panzerotti – piccola goody-filled savory southern Italian pastries – on the menu was never in question. The golden brown, light but flaky puffed up crust holds different fillings, some very traditional; some riffs on the traditional: scallion, olive, and anchovy; gruyère and prosciutto; tomato and fresh mozzarella; broccoli rabe, black olive and almond.

The version below combines the sweetness of tomatoes and fresh mozzarella with the tangy bite of anchovy, but really, you can fill them with anything – as long as, Nicola says, you keep it simple – a tenet of Italian cuisine if there ever were one.

Pick up some end-of-the-season finds at your local greenmarket and try these for a dinner party in the upcoming holiday season, or make just for fun for yourself.

In a large bowl, dissolve the yeast and sugar in ¼ cup warm water. Set aside to proof for about 5 minutes. Add 3 tablespoons of the olive oil, ½ teaspoon salt, several grinds of fresh pepper, and 1 cup warm water. Add most of the flour, a half cup at a time, stirring with a wooden spoon until a dough forms that leaves the sides of the bowl. Turn the dough out onto a lightly floured work surface and knead for about  8 minutes, until it is smooth and springy, adding flour as needed to keep it from being too sticky. Shape the dough into a ball.

Brush a bowl that is about twice the size of your ball of dough with the remaining ½ tablespoon olive oil. Place the dough in the bowl and turn it so it becomes coated with oil on all sides. Cover it loosely and set it aside to rise until doubled, about 1 hour at room temperature, longer in the refrigerator.

Coarsely chop the tomatoes. Place them in a colander set over a bowl and sprinkle with salt. Let drain for 30 minutes.

When the dough has risen, divide it into quarters, then cut each quarter into 4 pieces. Place a piece of dough on a lightly floured work surface and cover the remaining pieces with an overturned bowl. Roll out the piece of dough to a 4-inch circle. Place 1 teaspoon tomato and a piece each mozzarella and anchovy to one side of the circle. Fold the other half of the dough over the filling to make a half-moon. Press out the air and pinch the edges firmly together to seal. Use a fork to seal them tight. Repeat with the remaining ingredients.

In a deep, heavy saucepan or deep fryer, heat at least 1 inch of oil to 370 degrees on a frying thermometer, or until a 1-inch piece of bread dropped in the oil browns in 1 minute. Carefully slip the panzerotti, a few at a time, into the hot oil. Leave enough room between them so that they do not touch. Turn them once or twice and cook until golden brown, about 3 minutes.

Remove the finished panzerotti with tongs or a slotted spoon and space them on paper towels to drain. Serve hot.

Find a full profile of the Marzovillas in our current holiday issue.