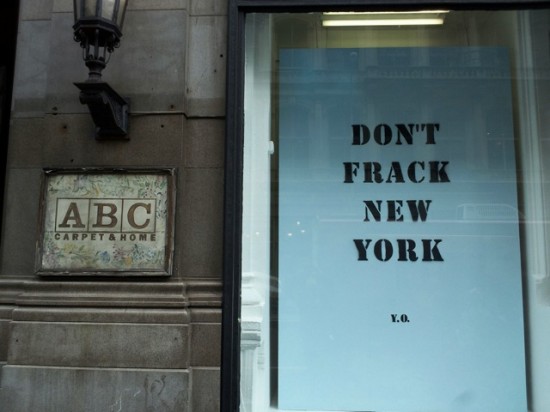 A critical mass of New York celebrities and food luminaries is opposing fracking in the city’s watershed. Mario Batali and Edible hero Bill Telepan recently authored a persuasive op-ed asking the governor to “serve food, not fracking” in a May 30 opinion piece in the Daily News. Gasland 2 will headline the docs category at the Hamptons International Film Festival with renewable energy fan Alec Baldwin moderating the discussion. And, earlier this month, at an event hosted by ABC Kitchen and Home with Deepak Chopra, a new coalition of food and drink businesses was formed to push elected officials to ban fracking in the state.

If you haven’t been privy to the discussion about hydrofracking in New York, you might be living under a rock. It’s as troubling as any environment and food issue going in the Empire State.

“For us to go out and poison our water, it’s like a bad sci film,” said Paulette Cole, chief executive and creative director of ABC Carpet & Home, and founder of the new coalition, Businesses Against Fracking New York. “At this critical time, as business leaders, we have gathered to address Governor Cuomo and urge him to say ‘no’ to fracking.” Behind her on the wall was an anti-fracking installation “Imagine No Fracking,” which recently opened in ABC’s Broadway Windows by artist and activist Yoko Ono, who, along with her son Julian Lennon and other famous New Yorkers (Mark Rufalo, Hilary Baum, Mary Cleaver), have lined up against fracking.  As Deepak Chopra, who regularly moderates discussions at this conference space, said in defensible hyperbolic terms.: “We’ve gotta stop it. It’s gonna kill all of us and our children.”

This room was filled with prominent business owners– among art, agriculture, business and activism, including the head of the American Sustinable Business Council and founder of Aveda–united by the idea that endangering our water supply, even if the risks remain uncertain, could raise costs for everyone, and hurt the city and state in other ways: reduced tourism, unprecedented water cleaning costs, pollution of precious farm and pastureland. More than 1,000 businesses have spoken out against fracking New York to date; earlier this week, Chefs for the Marcellus and Food & Water Watch organized the New York Crossroads Rally & March: No to Fracking/Yes to Renewables.

Speaking on behalf of the antifracking majority in New York state, the panel featured economist Jannette Barth, who cited evidence that fracking’s “boom-bust” job benefits have proven to be short term, and that recent studies indicate that New York could be self-sufficient in renewables by 2030. Filmmaker Josh Fox of Gasland and Gasland 2 told tragic tales of families whose farms, health and lives were ruined by fracking. Alex Matthiessen, Hudson Riverkeeper and the executive director of the Riverkeeper organization, admitted that while he had once been a supporter of natural gas as a “bridge fuel” away from other fossil fuels, he now knew that was “a farce” and natural gas was just as dirty in many ways.

Steve Hindy, president of Brooklyn Brewery, echoed the sentiment of other Empire State winemakers, distillers and brewers (Ommegang Brewery has previously threatened to leave Cooperstown if fracking procceds in its water supply) when he spoke of fracking’s irrevocable harm.  “It is critically important for my business that the water be pure—and we’re all drinking that water, too. My message to Governor Cuomo is ‘don’t let them frack up my beer.”

Food and drinkmakers have quickly moved to the center of this debate. Several years ago, a coalition of thousands of New York City chefs and restaurant workers banded together under the “Chefs for the Marcellus” campaign, arguing to the governor that regardless of the short term benefits, fracking will endanger the market for Empire State produce in New York City and beyond. The Park Slope Food Co-op, which has 100,000 members, has organized a letter writing campaign noting that it will stop buying from organic farms in the region. And yet we have still not banned fracking on some of our best farmland in New York, smack dab in the middle of the watershed that provides drinking water for nearly 15 million New Yorkers.

And in a recent piece for Edible Manhattan “Cooking with Gas” chef Peter Hoffman laid out the parameters of the scale of the debate, given the shale gas gold mine apparently hidden under New York’s main watershed. “Mid-level development [according to industry estimates] would mean 35,000 wells in our backyard—as many as currently exist in the whole country.” Making the case for locavores, and all eaters, Hoffman, who also delivered a talk at TedXManhattan on the same subject, said, “Gas drilling in New York state is in conflict with healthy, viable, small farms… thousands of acres of New York’s best farmland and the watershed for millions of people including everyone in New York City. This is a play we should not ante up for. You will be able to dine with the deep pleasure of knowing that your dinner hasn’t added to the ruin of the planet.”

In our correspondences with Edible publishers around the nation, we were surprised and further troubled by hearing that hydrofracking developers are eying good farmland and watersheds nationwide—from Marin County, Calif., to the Mississippi River basin in Iowa. New York, it seems, is not alone. All the more reason for New York to lead the way and show to the nation that we value our food and water more than short-term energy needs.

Learn more and take action at Chefs for the Marcellus and Food & Water Watch.

Brian is the editor at large of Edible East End, Edible Long Island, Edible Manhattan and Edible Brooklyn. He writes from his home in Sag Harbor, New York, where he and his family tend a home garden and oysters. He is also obsessed with ducks, donuts and dumplings.

IN OUR CURRENT ISSUE: Going Beyond the Textbook at Food and Finance High