An American-born Scotch maker brings back the blend. 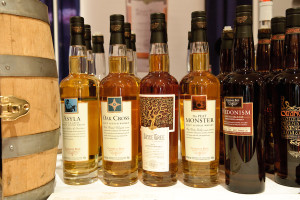 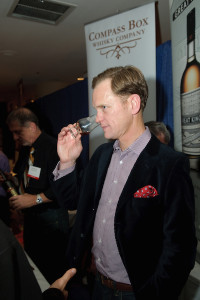 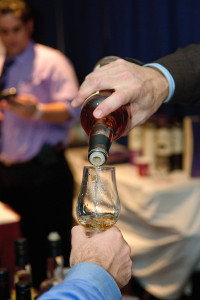 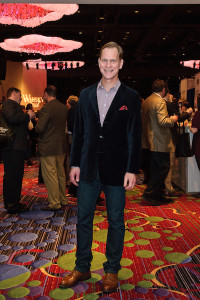 When the denizens of the distilling world descended upon Manhattan in November for the 12th annual New York WhiskyFest—The Whisky Advocate’s annual mega tasting for fans of brown booze—there were the usual cliques among the crowd of 2,000 who hit the ballroom of the Marriott Marquis in Times Square. Industry types—bar owners, buyers for big liquor stores, booze writers—attend, as do hundreds of ordinary drinkers, who take in lectures like “Classic Malts or “Test Your Palate with a Blind Tasting” before they immerse themselves in a wonderland of whiskey. (“Let’s do this!” two dudes say as they highfive at the front door.)

And then there are the 330 whiskey makers themselves, arriving from distilleries as far away as Japan and the Scottish Isle of Jura. They include the good old boys of bourbon, with their pink cheeks and denim button-downs; a handful of hipster newcomers making whiskey from heirloom spelt in basement stills in Brooklyn or Chicago; and, of course, the old-fashioned sons of Ireland and Scotland, bedecked in their tweed and plaid. Sandwiched in between the latter you’ll find John Glaser, a 48-year-old from the Midwest who founded Compass Box Whisky Company in London in 2000. Glaser also makes Scotch, but he’s out of place in this corner of the Marriott ballroom, and not just because he’s brogue-free and has shown up in skinny jeans and a velvet sports coat instead of a kilt. Most of his colleagues peddle Scotch from rural villages that haven’t changed a recipe in centuries, wooing drinkers with terroir and tradition. When ticketholders finally stumble over to Glaser’s table, he doesn’t offer either.

Glaser is a man after flavor, tradition be damned. He’s not a distiller but a blender: He buys the best casks of somebody else’s Scotch from Islay or buttery Scotch from Speyside or the Northern Highlands, mixes and ages them in his tasting lab back in London, using a variety of woods from sherry casks to toasted French oak. While most big-name blended Scotches are boring—think of always-consistent, easy-sipping behemoth brands like J&B, Johnnie Walker Red and White Horse, which can rely on fake coloring and higher quantities of lower-cost liquor made from grain instead of malt—Glaser is instead creating small-batch boutique flavors from handmade blends. He belongs not next to Mackillop’s Choice and Dewar’s, but over at the “Craft” table with Tuthilltown’s Hudson Baby Bourbon and Koval, the Chicago outfit making white whiskey from millet, spelt and oats. In fact, Glaser would likely argue his tipples are actually more delicious than those that take tradition straight: Not for nothing did master liquor writer Michael Jackson call him the “enfant terrible” of whiskey.

Most people think blended Scotches “are cheap shit not worth drinking,” Glaser says to Julian Van Winkle III , the current patriarch of the fourth-generation Old Rip Van Winkle distillery in Frankfort, Kentucky. Van Winkle wandered from his booth over to Glaser’s, stopping to take in the spiel. Glaser explains that he wants to blend the best stuff he can find—making the end result worth seeking out.

It’s kind of like making a killer cocktail, whose composition is built from the best flavor-forward ingredients. As you can imagine, Glaser is a maverick who plays big in the Manhattan mixology scene. Compass Box blends—the intensely meaty Peat Monster, a classically smoky bottle called Flaming Heart, the lightly fruity Aysla, or the Spice Tree, aptly named and complexly cool—are now de rigueur at revered city bars like Death & Co. and PDT and Summit Bar in Alphabet City. They’re served neat or over a few of those giant Kold-Draft ice cubes, but also in custom cocktails like the Summit’s John Lee Hooker, which co-owner Greg Seider makes with Peat Monster, bourbon, lemon peel, two kinds of bitters and a Lagunitas Hop Stoopid Beer. Seider—also the creator of the first-ever cocktail menu at Le Bernardin—is one of many Manhattan barkeeps Glaser knows by name, and at WhiskyFest Seider stops by to taste Glaser’s brandnew “Artist’s Blend,” called Great King Street. It’s a more laid-back, balanced blend made with modern mixologists like Seider in mind. (Glaser made it from a mix of lowland grain whiskey (51.4 percent), two single malts from the northern highlands (40.9 percent) and a single malt from Speyside (7.7 percent), to be specific). “Note all the beautiful elegance of the vanillins, the cleansing properties,” Glaser says to Seider as they each take a sip: “It’s just 43 percent ABV,” he adds, looking at the barman over his glass, “great for highballs.”

Cocktails are not generally part of the repertoire for Scotch makers, who might argue that even one ice cube is debasement of product. But Glaser’s had a different career path than most. His first dream job was to be a winemaker, but a lack of chemistry skills, he jokes, meant he was better suited for marketing. He worked first for a major wine distributor, then, in the 1990s, got a job with Diageo in Manhattan, the multinational liquor company that owns brands like Smirnoff, Tanqueray and Johnnie Walker. Glaser had been tasked with buffing up the image of old blended Scotches whose sales were slowing—“they were so uncool” bemoans Glaser—and the company eventually moved him to England.

Inspired by his past projects pushing wine—and by the observation that handcrafted artisanal blends in both coffee and chocolate were huge—Glaser floated the idea that his lackluster Diageo labels could create custom blends made with taste in mind rather than price point. His bosses didn’t bite. So Glaser—who had already been tinkering with making his own Scotch blends with bottles of single malt in his apartment back in Manhattan —decided to become the first whiskey negociant, a wine term for those who buy rough wines, then blend and age them into their own brands.

He opened Compass Box in 2000, registering an office on Great King Street in Edinburgh, Scotland. (By law any company selling Scotch must have a Scottish address, though Glaser lives and works in London.) Glaser, who is still the company’s sole product developer, begins his creations roughly the way he did back in the States: His London lab contains a collection of bottles and samples, which he mixes up in varying proportions, noting the results. Once the formula is finessed, he’ll buy whole casks of what he needs from Scottish distilleries to reproduce the results for drinkers worldwide.

Ten years on he’s had a few slaps on the wrist—the Scottish government, which regulates the beverage, said he had to stop aging the Spice Tree with extra wood staves, as they aren’t part of the tradition—but he’s earned plenty of honors from critics. To date he’s racked up more than 60 best-of-class awards from reviewers, including The Whisky Advocate’s 2011 best blend of the year for the 10th anniversary bottles of Flaming Heart. He’s also earned the ultimate praise, which is to say imitation: Johnnie Walker is now promoting its brand new Platinum Label blend as “a modern whisky for the contemporary, stylish consumer.”

Glaser is inspiring a new crop of booze-blenders, too: At WhiskyFest, a few local DIY nerds stop by the table with their own tiny bottles for Glaser to evaluate. One even uses his home smoker to add flavor from maple wood chips, since he can’t get his hands on old barrels: “I took a 10-year-old Ardbegh and ran it through the process,” he says, beaming as Glaser admires the bottle. “I love this kind of stuff,” says Glaser as he takes a taste, noting that he highly approves of small-batch spirits makers he sees starting up tiny stills in cities like ours.

That’s much harder to do back in England or Scotland, he says, mainly due to prohibitive cost-of-entry fees for new liquor companies. He dreams of one day coming back to the States, maybe opening his own small distillery as a retirement plan. Until then, the goal is to promote the art of the blend one WhiskyFest at a time—whether those stopping by to sample are ordinary drinkers, or even distillers themselves, like Julian Van Winkle. “It’s about complexity in the glass,” Glaser says to the third-generation whiskey maker as he offers him a sip of the Spice Tree. Van Winkle nods, perhaps remembering the not-so-distant days when the Kentucky bourbon he makes wasn’t much respected either. “My daddy,” he says with smile, “used to say that, too.”

Rachel Wharton is Edible Manhattan’s deputy editor, who is endlessly amused by the fact that Scotch whisky gets no “e” while American whiskey does.