In the East Village, Art and Anarchy Pay Off at Ruffian Wine Bar & Chef’s Table

This article appears in Spring 2018: Issue No. 54 of Edible Manhattan.

Both the food and wine convey a refined coziness that allows you to get comfortable even while seated on a stool. 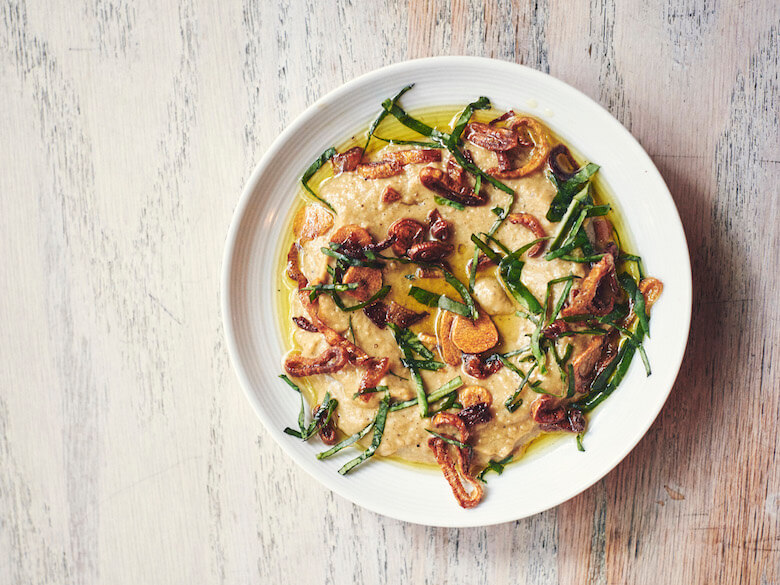 Ruffian’s small plates are created in the tiny kitchen by Josh Ochoa and Andy Alexandre, who have both been cooking for their entire lives.

“This burrata is great,” announces Patrick Cournot, a beverage director and co-owner of the East Village’s tiny Ruffian Wine Bar & Chef’s Table. The restaurant is about to open, but all the employees are huddled in a corner as the photographer for this story gets a full shot of the slim space. “Andy made it,” cook Nicole Bruno says from somewhere near the window. No one can tell him how great it is yet, though, because he’s escaped to skateboard up and down East 7th Street, killing time before he gets behind the counter that functions as both the only table and the pass.

One gets the sense that none of this is too out of the ordinary. There’s a palpable feeling of play and intimacy between all of the eight employees, five of whom are partners, and there has to be: You can’t escape to anywhere except the bathroom, but you also wouldn’t want to. Both the food and wine convey a refined coziness that allows you to get comfortable even while seated on a stool. 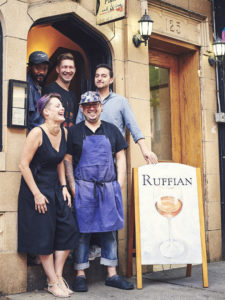 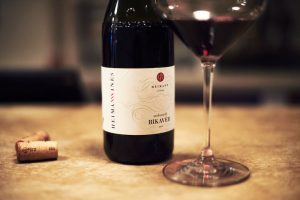 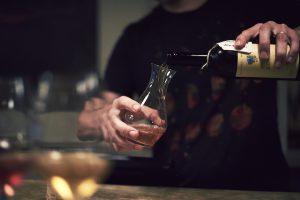 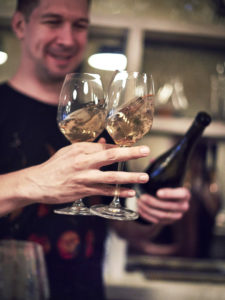 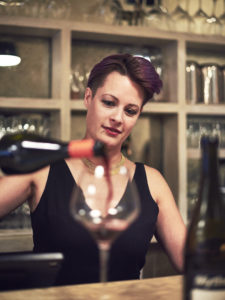 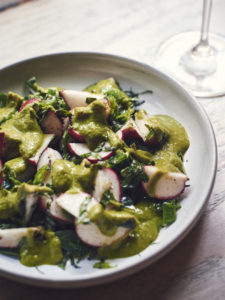 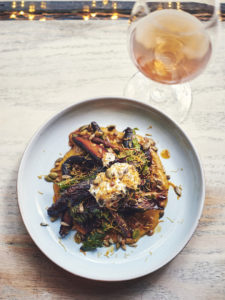 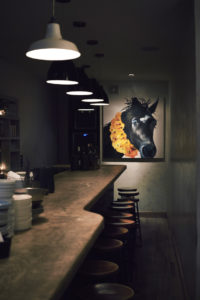 Much of the credit for that vibe goes to Patrick’s wife and co-owner Elena Hull Cournot, a painter, designer, and creative arts therapist whose portrait of a horse wearing an orange garland of flowers hangs in the back of the restaurant. Once you’re seated, her art greets you again in the form of colorful hand-painted and -assembled menus.

“Color, texture, light, atmosphere and conversation” were her concerns, and she used light-colored walls as well as a lightly stained and finished concrete bar to give an airy and open feel that distracts from the size. “My vision was a wine bar that had the divine openness of a museum that really invites you to focus on the art,” she tells me. “The art at Ruffian being the food, the service and the wine.”

The wine art is provided by Cournot and Alexis Percival, the restaurant’s other beverage director, who focus the list on orange and Eastern European bottles. Cournot initially went into finance but “hated it,” kicking off his food career in an office at Bouley. 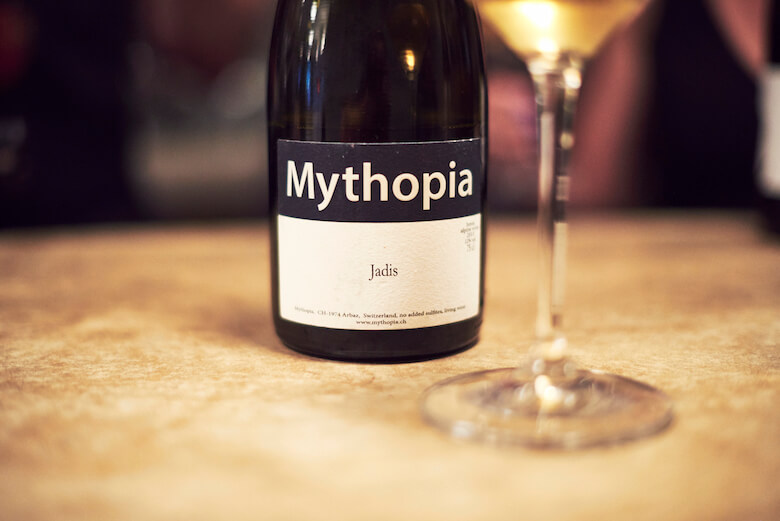 The wine art is provided by Cournot and Alexis Percival, the restaurant’s other beverage director, who focus the list on orange and Eastern European bottles.

“I didn’t know shit about restaurants,” he admits, but he got seated next to the sommelier and saw how the job combined everything he enjoyed. Percival is the opposite; she’s spent her career in hospitality. But once she found herself on the floor at a wine bar, she asked herself why she hadn’t been doing it fifteen years ago. Their styles, both personally and professionally, complement each other, making for a dynamic list and range of pairings.

Ruffian’s small plates are created in the tiny kitchen by Josh Ochoa and Andy Alexandre (of the burrata fame), who have both been cooking for their entire lives. Ochoa, from California, remembers being in the kitchen with his grandmother. “When my mom was at work, she’d be home and cook three meals every single day,” he recalls. “And they were all from scratch.” The style he grew up with was a mélange of Mexican, Californian and Tex-Mex; he was no stranger to the smell of fresh tortillas. Alexandre spent his childhood in Haiti before moving to New York City as a teenager. “To me, food is very visual and focused on the ingredient,” he says. The hominess and artistry of each chef combine to great effect on plates that pop both in color and flavor.

Most of the partners in the restaurant met while working at the more traditionally structured Floyd Cardoz restaurant Tabla, making Ruffian unique in its rejection of restaurant hierarchy. When I bring that lack of hierarchy up to Cournot and Percival, both laugh. “There’s none,” Cournot says. “I went to school for business, and we’re violating so many of those rules.” In this small space, at least, art and anarchy pay off.