Under the Museum’s Microscope: Food 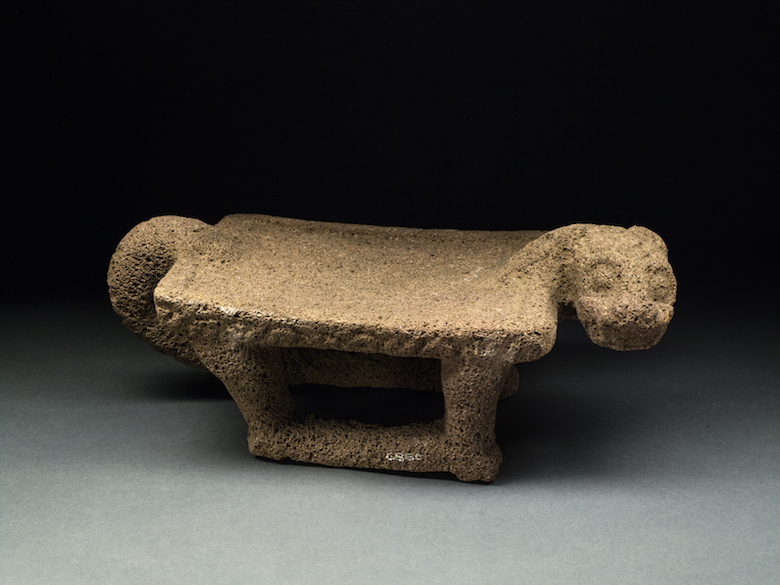 From November 17 until August 11, museumgoers can ruminate on the biological and cultural context of the human diet or, as it is more colloquially known, food.

Eating is, of course, every living thing’s driving force, but ours is the only species to farm or cook—two endeavors that have shaped society and have lately wreaked havoc on our planet. For “Our Global Kitchen,” co-curators Eleanor Sterling and Mark Norell combed through the museum’s vast collections and selected a treasure trove of objects related to agriculture and eating: an ancient earthenware stove from China’s Han Dynasty; a thousand-year-old jaguar-shape Venezuelan mealing stone; a Moroccan jar for keeping preserved goat or sheep butter called smen; delicately dyed Ukrainian Easter eggs; and Mexico’s skull-shaped sweets, traditional on the Day of the Dead.

The exhibit begins with trade and transportation, walking viewers through continental food exchanges from the 16th century (complete with a 1519 Mexican market similar to the one where Spaniards first saw turkey, tomatoes, chilies and corn) through to the present day (the exhibit’s enormous illuminated maps plot global trade of everything from bananas to tuna).

In keeping with the museum’s mission, the exhibit examines environmental issues, including the ever-increasing agricultural use of pesticides, antibiotics and genetically modified crops—and suggests sustainable substitutions. (One green protein idea: U.S. farmers could raise some of the 2,000 species of insects regularly eaten around the world, like Mexican chapulines, or grasshoppers, served toasted with a side of garlic and lime.)

But “Our Global Table” also includes foodie gold—from Michael Phelps’s 9,000-calorie-per-day Olympic training diet to the kitchen chemistry behind kimchi, plus a scientific look at how a Moroccan tagine’s heat slow-cooks a mutton shoulder and medley of spices into melting, aromatic submission.

“The exhibit looks at the domestication of food, including how and why it has shaped ingredients, cultures and the environment through time,” Sterling says. “But it isn’t all about food systems and seriousness. A lot of it is light-hearted and thoughtful, too, like Jane Austen’s love of ice cream.”