Move Over, Manhattan: A Midwestern Drink for the Holiday Season 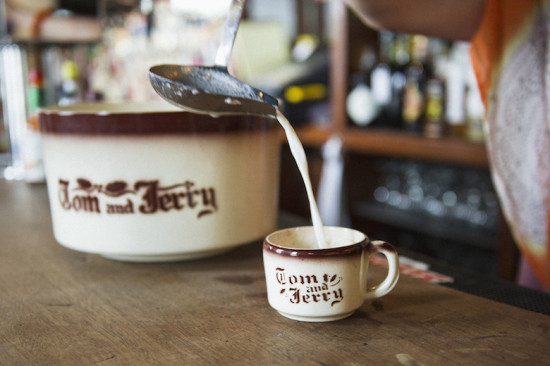 If you know the cocktail called Tom & Jerry—a frothy, rich, Christmas-time drink—you likely also know that the libation is beloved in the Midwest but seen in New York about as often as that wedge-of-cheese headgear favored by Wisconsin football fans.

According to cocktail historian David Wondrich, the drink was created in the early 1850s by mixology patron saint Jerry Thomas, who, according to legend, refused to make them until after the first snowfall. The drink found favor at the Planters’ House hotel in St. Louis and today some Midwestern markets sell Tom & Jerry mix, but many families still prize their from-scratch recipes. Among Wisconsin natives it has long been an annual ritual to whip up a batch—literally. Akin to eggnog, the recipe requires copious amounts of eggs.

For Wisconsin expats here in Manhattan, an East Village bar called Tom & Jerry’s became a natural gathering place. Behind the bar, shelves are stacked tall to showcase a dazzling array of more than 40 antique Tom & Jerry bowls, the traditional vessel for preparing the drink. These bowls belonged to Joe Wilfer, a printer best known for his collaboration with the artist Chuck Close. A longtime friend of the three co-owners of Tom & Jerry’s, Wilfer grew up in Wisconsin, explains Joanna James, one of the bar’s owners.

Wilfer died in 1995 and, every year since, a close circle of his friends have made an annual pilgrimage from Wisconsin all the way to Tom & Jerry’s, where they pull down one of his vintage bowls from the shelf, mix up batches of the brandy-kissed drink and toast to their beloved friend’s memory. They still use Wilfer’s recipe (below): a labor-intensive batter made with eggs, spices and sugar, whipped right in a Tom & Jerry bowl, of course. A dollop is ladled into each cup, where it is mixed with dark rum, brandy and hot water.

Recalls James: “The joke, according to Joe, was ‘The cups are so little, by the end of the drink, everyone would have egg white on their nose.’ ”

Those little cups of the stuff go a long way, so they happily hand hot drinks round the bar, and before long old friends make new ones. It’s a cultural rite these Midwesterners reenact with each other—and anyone else who happens to stumble in from Houston Street.

Kara Newman is the author of The Secret Financial Life of Food: From Commodities Markets to Supermarkets (Columbia University Press).

Scoop a dollop of batter into each cup, and stir in brandy, rum and hot water. Top with grated nutmeg, and toast to Joe Wilfer.