“True hospitality extends to others and to yourself,” she writes. “Too often we forget about the latter.” 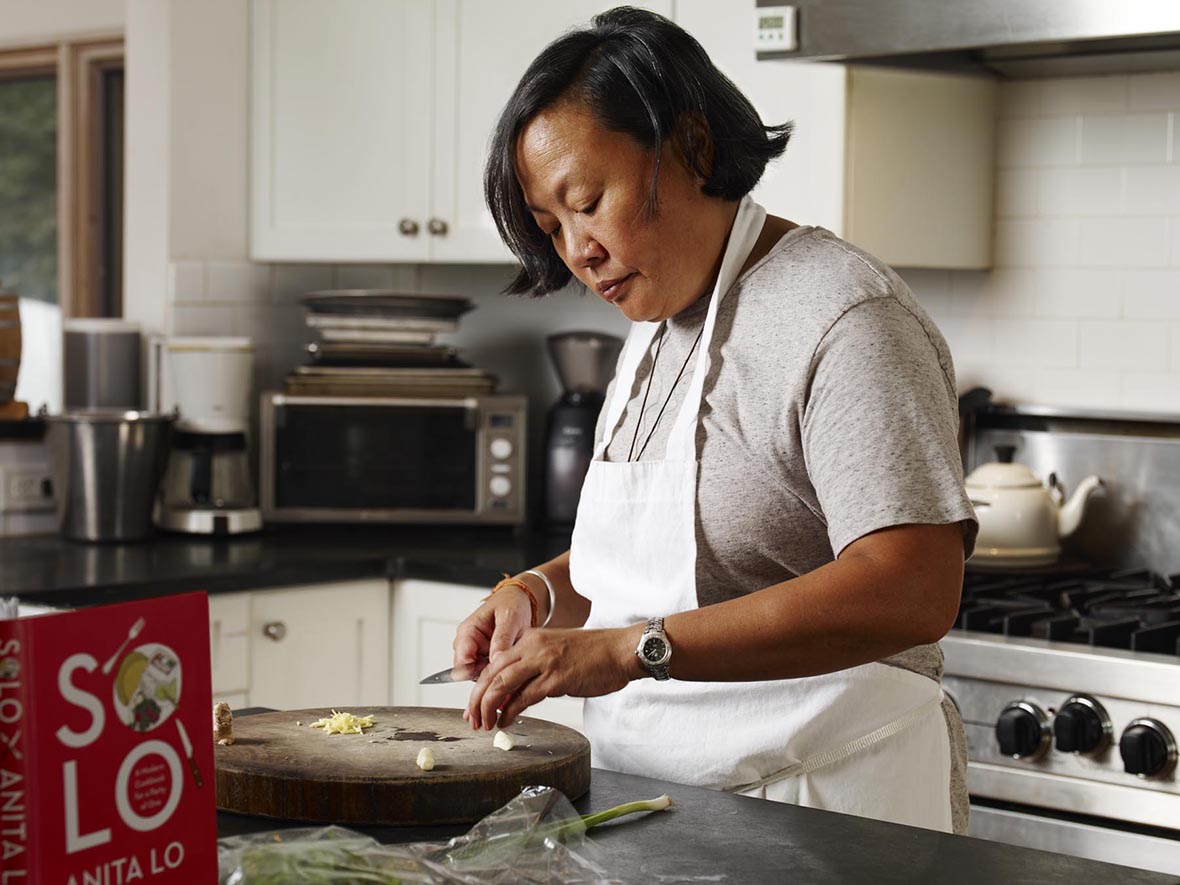 Chef Anita Lo in her kitchen. “It’s still not easy to say what Ms. Lo’s style is, but it is hers, and hers alone, and the city is a more exciting place for it,” wrote Pete Wells in his three-star New York Times review of the restaurant.

Early one morning in late September, I phone chef Anita Lo. I’m bundled in blankets, catching up on research and writing at a friend’s kindly loaned beach house on Vashon Island, which just entered its off-season; Lo is in her New York City apartment, preparing for a drive to her house on Long Island. What to make for dinner, I wonder, just for me, in this empty cabin?

“Get some shellfish and just steam them and add some butter and you’re done,” she says. I nod in agreement. It sounds highly doable and, as she walks me through her process, I envision myself sitting cross-legged on the sofa later that evening, a bowl of warm, salty clams resting at my ankles, no utensils required.

As Lo points out in her new cookbook, Solo: A Modern Cookbook for a Party of One, clams are solitary creatures. At the beginning of her recipe for “Clams with Chinese Black Beans and Basil,” she explains that the saying “happy as a clam” was at some point shortened from “happy as a clam at high tide,” which is “when clams can’t be dug up, and are left alone and content.” We all feel that way sometimes, don’t we? 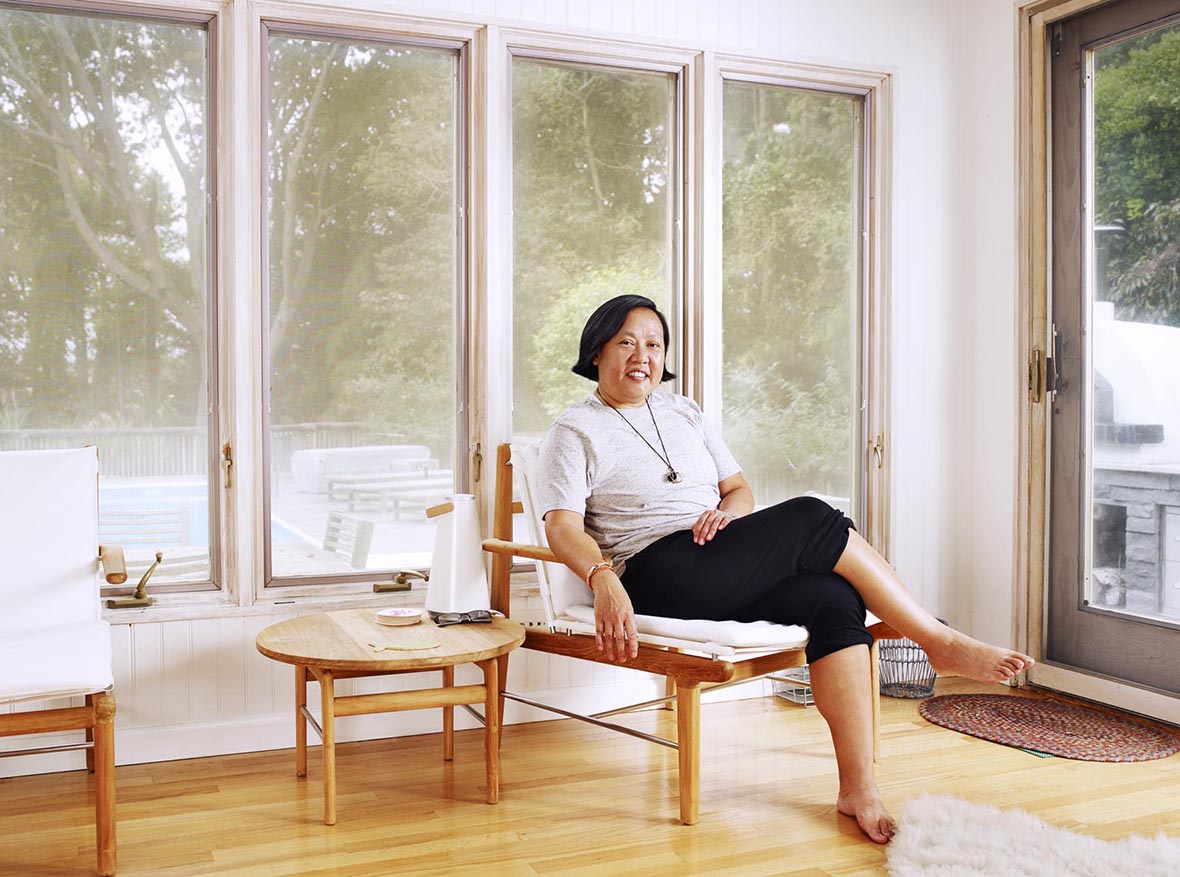 Anita Lo relaxes at her home on Long Island. “When you’re cooking for yourself, you’re just trying to make yourself happy,” Anita Lo says of her motivation to write Solo. “It’s just really about what you want to eat.”

The chef’s writing is engaging, filled not only with linguistic factoids but also vivid personal stories and self-deprecating humor. (“A healthy dose of self-pity” reads the final ingredient in an egg dish created for the jilted lovers out there, a club of which Lo admits she has, at times, been a member.) Solo’s recipes range from roasted and pickled radish tacos to chicken tagine with raisin-studded couscous, reflecting the same inspired, well-traveled approach to cooking that Lo was known for in professional kitchens. Here, though, she accomplishes a seemingly impossible task, proportioning even pho for one diner.

“When you’re cooking for yourself, you’re just trying to make yourself happy,” she says of her motivation to write Solo. “It’s just really about what you want to eat.”

Born in Michigan, Lo studied French at Columbia University before moving to Paris—where she once successfully roasted a chicken in the toaster oven of her tiny, refrigerator-less kitchen—to study culinary arts at the Ecole Ritz Escoffier. She interned at Guy Savoy, worked at Chanterelle in New York and, as part of the first wave of what were called chef-driven restaurants, she opened Annisa in the West Village in 2000 and charmed every food-loving Manhattanite with her French technique-driven global cuisine and intimate cream-colored dining room. “It’s still not easy to say what Ms. Lo’s style is, but it is hers, and hers alone, and the city is a more exciting place for it,” wrote Pete Wells in his three-star New York Times review of the restaurant. Lo closed Annisa last year due to rent increases, but even after cooking there for 17 years, it’s clear from our conversation and in Solo that she still loves working with food.

“I don’t always feel that way about chefs,” says Charlotte Druckman, who helped Lo write her first book, Cooking Without Borders. Druckman and Lo spent time on Long Island together, fishing and playing around in the kitchen. “She really likes to cook, and she really likes to cook at home.”

Even if it’s just for herself.

Back on Vashon, I resolve to buy clams—and ginger and sriracha. I felt encouraged to do a little extra, and make those Clams with Chinese Black Beans and Basil.

“Alright,” Lo says as I pull on my boots. “Take care of yourself.” 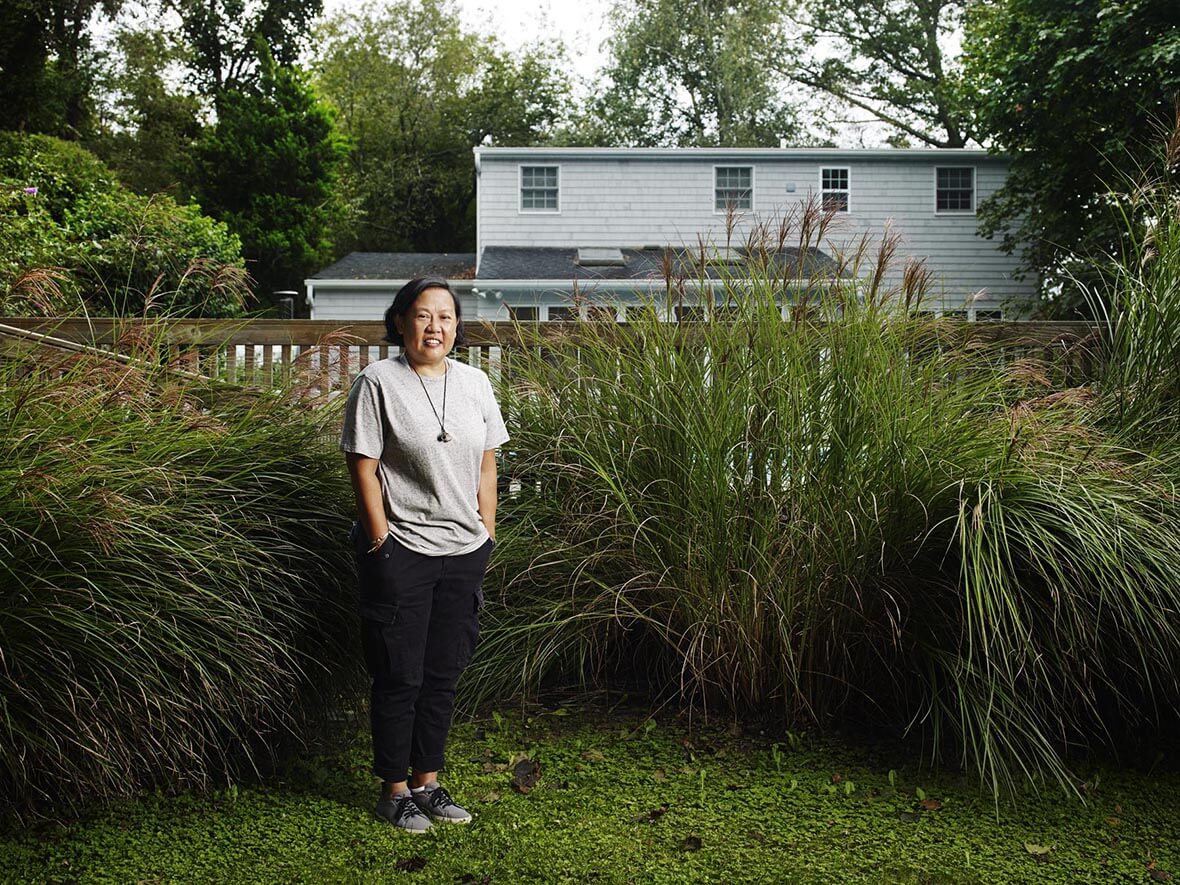 “True hospitality extends to others and to yourself. Too often we forget about the latter.”

The following is an excerpt from Anita Lo’s Solo: A Modern Cookbook for a Party of One:

I put the “Lo” in “solo.” The A Lo in “alone.” I’ve been dumped almost as many times as I’ve been in relationships—and I can count those on less than two hands. Spread over my 50-year life span, that’s a lot of solo meals. So if you consider that—coupled with my many years working as a professional chef—it seems that I’m particularly well suited to write this book. Those chefs who say they can’t cook for fewer than 40 people? Not me—I can do math. It is my Asian birthright.

I’m also fanatical about waste. Waste is what makes cooking for one, at least efficiently, so difficult. My parents were Chinese, and my father survived the Cultural Revolution. Food, at least at some point during their lives, was scarce; as a result, I was taught never to waste one bit. In cooking school at the Ritz Escoffier in Paris, we were taught to utilize every scrap, and at Bouley—my first cooking job—the sous chef used to look through our garbage cans to make sure we weren’t being wasteful. It is an economic issue but also an ecological and social one. When I cook for myself, much of my food involves using the often-overlooked but just-as-delicious parts of meat and vegetables. For example, I grew up eating broccoli stems as well as the florets. Instead of discarding cabbage hearts, my mother gave them to me to snack on raw while we were cooking. We didn’t use radish leaves, but they’re virtually identical to turnip greens, so I generally cook those along with the root itself, which helps you include more dark-green vegetables in your diet. And all those parts in the bag that comes inside of a chicken? If used properly, those parts are pure flavor—and another meal. Plus, cooking this way is important if you’re working with fresh ingredients or on a budget.

The hospitalitarian in me also dictates that meals should be balanced. (Yeah, chefs are neurotic.) There must always be a vegetable or two. And your food should vary from day to day. It should be diverse in ingredients as well as in cultural provenance. Some days you’ll want to eat light and healthy; on other days, butter is a perfectly good substitute for love. True hospitality extends to others and to yourself. Too often we forget about the latter. 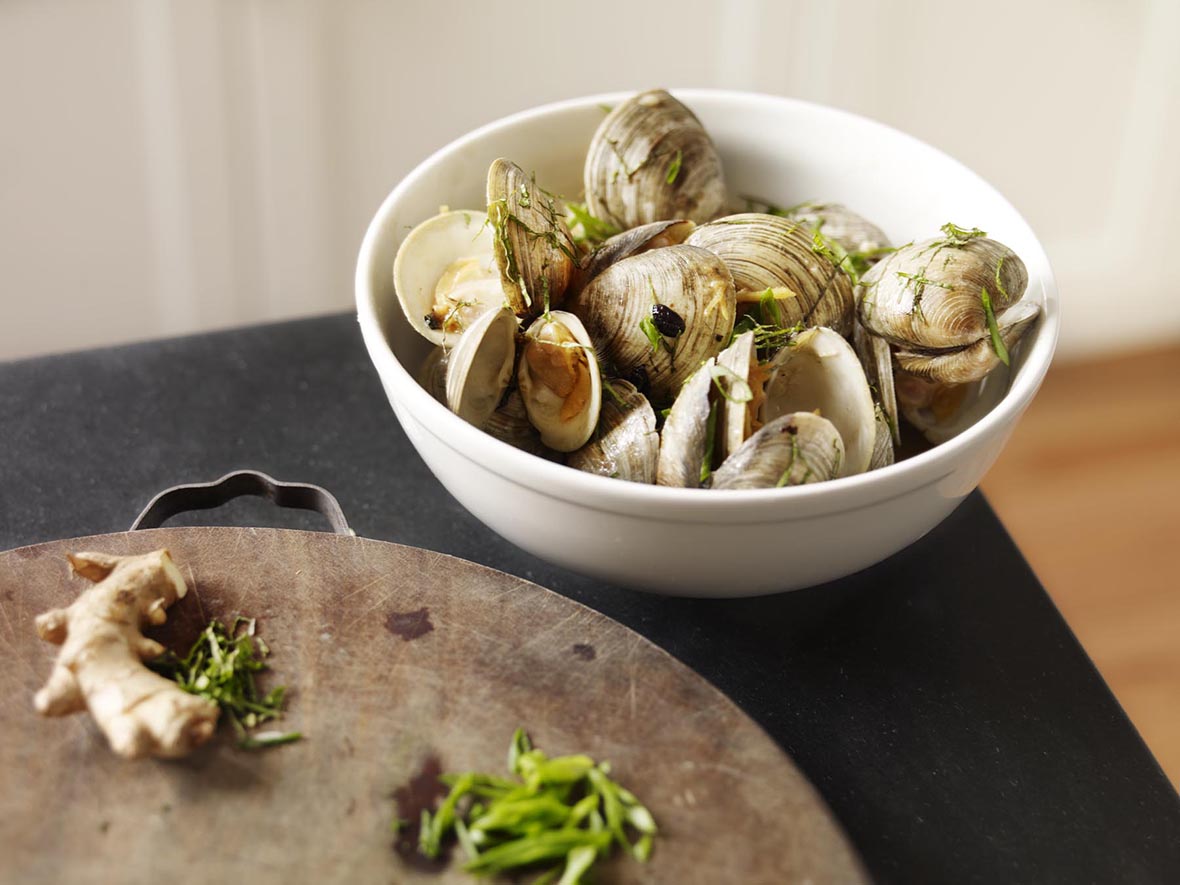 “Clams are solitary creatures, living buried in sand, encased in their own shells.”

Alone tonight? Consider the clam. Clams are solitary creatures, living buried in sand, encased in their own shells. The idiom “to clam up” refers to the bivalve’s tendency to clap its shell shut when disturbed. But clams are loved across the world as a food source, and in the Northeast, the shells were once used as currency by Native Americans. The Latin name of the hard-shell clam is Mercenaria mercenaria, which refers to its use in commerce. And the saying “happy as a clam”? This is shortened from “happy as a clam at high tide”— when clams can’t be dug up, and are left alone and content. As you will be, after preparing this easy, tasty recipe.

Heat a shallow braiser or pot on medium heat. Add the oil, then the garlic and ginger, and stir until garlic is sizzling but not browned. Add the stock or water, then the clams, and cover.

Cook until the clams have just opened. Then, using a slotted spoon, remove them to a warm bowl.

Add the oyster sauce, sriracha, sugar, pepper and black beans to the broth in the pot. Bring back to a boil on high heat and whisk in the dissolved cornstarch a little at time until thickened. Spoon sauce back over the cooked clams and garnish with the Thai basil, mint or scallion greens.

Excerpted from Solo: A Modern Cookbook for a Party of One by Anita Lo. Copyright © 2018 by Anita Lo. Excerpted by permission of Alfred A. Knopf, a division of Penguin Random House LLC. All rights reserved. No part of this excerpt may be reproduced or reprinted without permission in writing from the publisher.