If a peek at Dean & Deluca’s Easter catalog had you yearning to taste Greek traditional foods, there’s a reason. 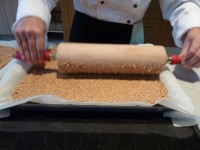 If a peek at Dean & Deluca’s Easter catalog had you yearning to taste Greek traditional foods, there’s a reason.  Maria Romer, the food buyer for for the company, tells Edible that the pages were inspired by her trip to the Messinia region on the west coast of the Peloponnese peninsula, an area that is known for having fertile, mineral-laden soil.

After tasting products from a new line of Greek artisanal food products called Navarino Icons, Romer was hooked: So she forged an exclusive relationship with Costa Navarino, the new sustainably minded resort on the Bay of Navarino where the products are made. That’s why the pages of the catalog encourage all food-lovers (Greek or otherwise) to celebrate Greek Easter, too, which falls on April 15th.

I can understand Romer’s passion for the place. My own recent journey to Messinia was a vivid reminder of the food culture I witnessed on the island of Crete some 15 years ago. There I saw people devoted to making simple artisan foods, always using methods that had been handed down in families for generations. I found the same way of thinking in Messinia. Not to mention that visually it’s unspoiled and breathtaking: The Ionian Sea lies adjacent to lush farmland; the landscape is covered with thousands of olive trees. Of course Messinia is also blessed with the idyllic Mediterranean climate, where fruits turn naturally sweet from the sun, and air filtered by salt gives anything growing in the earth an extra kiss from nature.

I saw that the local people in Messinia were still connected to the land. They had not abandoned their old ways; they were proud to be involved in the production of their own traditional foods. Here artisanal food has always been integral to the way of life.  How could it not be? In every season, the land bestows the cook with its gifts; the landscape, in subtle shades of green, is a tapestry of olive trees.

Capt. Vassilis C. Constantakopoulos, whose vision it was to create Costa Navarino, included in his plan a way to give back to the people who live in the villages there. They were to be given jobs and encouraged to work the land as had been done for centuries. Today, his son, Achilles Constantakopoulos, managing sirector of Costa Navarino oversees the Icons food line, as well as making sure that the largest reforestation project in Europe, which took place on the property, was done with integrity. Some 6,500 olive trees were successfully replanted. There are a total of 16,000 olive trees on the property. Most are Koroneiki olive trees, which is considered to be one of the best varietals in Greece. It is from these trees that I observed the olive harvest last autumn.

I watched as a group of young Greek workers carefully began with laying nets around the trees. Next, they used long sticks, known as debles, (that looked like hockey sticks) to strike the branches, forcing the ripe olives to fall onto the net-covered ground. Sometimes the workers had to cut the heavily laden branches and remove the olives by a gentle beating with a smaller stick. Everything was done by hand. The sun shone overhead creating dappled light through the olive trees, and the fruit falling in a steady rhythm, as it hit the ground, sounded like primitive music. I marveled at the simplicity of this ancient ritual. I had never before noticed how elegant olive trees are. So full of life. The more gnarled, more ancient trees, stood even more proudly, as if they had some secret wisdom to share, along with their abundant olives.

Once the olives were off the trees they were sorted for twigs and sticks then placed in burlap bags and driven to the nearby mill. I was mesmerized as the olives were washed quickly and then transferred to a very high-tech machine that used a cold extraction method known as decanter configuration. Essentially the olives were crushed, for 20 minutes at room temperature, into a fine paste. The paste was then pumped into an industrial decanter, where it was separated into pulp, moisture and olive oil.

This was a morning of juxtapositions: ancient meeting modern. It was heady, to say the least, to take part in this process and to then share with the mill owners the tasting of the just pressed oil. They toasted fresh bread in the kitchen fireplace and served fresh feta cheese. That was one of my personal high moments in terms of pure food, it doesn’t get much better.  I wish this for everyone at least once in life, and now you can get a taste at www.deandeluca.com, which now carries Eleon Extra Virgin Olive Oil, which I saw being pressed. (500ml $24.00; 1 liter  $30.00).

And then there are spoon sweets, also known as spoon fruits, which have long been a symbol of Greek hospitality. When entering a Greek home, one is immediately offered a teaspoon full of a “spoon sweet,” which traditionally has been homemade. Although in today’s fast paced world, the tradition has become less prevalent.

According to legend when the custom began, everyone took his or her spoonful from one common bowl to assure that it was safe to eat.

In the Navarino Icons version, as is common in Greece, the story begins with a mother.  Maria Balafouti runs the Folklore Museum (that I visited) in a small village named Yalova.  She started to make spoon sweets to treat the guests of the museum. Soon she began to makes spoon sweets for Costa Navarino. They now have a small company employing five local women that make what you’ll find at Dean & Deluca.

Spoon Sweets are not quite jam, nor jelly. The consistency is looser and with a smoother texture. The fruit in spoon sweets retains its original color, taste, and aroma. In cooking softer fruit and vegetables, a pickling lime bath is often the first step to firm up the produce. I watched Maria stuff the Kalomon olive with an almond, and then cook it, slowly, in dark syrup of thick grape must.

Maria and her team gently simmer locally grown fruit over several hours, or sometimes several days. They will only work with what the season allows, as the fruit must always be fresh. At different times of the year the flavors of the spoon sweets change.

The choices may surprise you, especially the Kalamon olive with herbs and honey. It’s sweet and addictive.

I urge you to buy some fresh Greek yogurt and place a dollop of  Maria’s spoon sweet on top. It will almost feel like you’ve gone to Greece.

Another product to try are pasteli bars: It’s a Greek food, so of course there’s a legend tied to it.  I’m told the original Olympians ate pasteli bars for nutrition and strength during early marathons. It is the simplest of snacks: the ingredients are sesame and honey. Sugar averse New Yorkers have become hooked on them, and they have already become the ‘it’ candy at Dean & Deluca.

At Costa Navarino’s kitchen I watched as Panagiota Karambatou and her husband made the pasteli bars.  Her family has been in the pasteli making business since the 1920s. Their young daughter observed every step, knowing the end result would bring her a treat.

Watching the honey and sesame seeds being stirred with a wooden spoon, and slowly unite into consistency that would result in pasteli, I could easily imagine this being prepared over a fire in centuries past. It’s the minimalism that makes pasteli such a perfect food. Protein comes from the sesame seeds and sweetness from honey. After it’s cooked, it’s poured into a flat pan and rolled out to harden, before being broken up into bars. (A 55 gram pasteli bar is $6 at Dean & DeLuca.)