Food Production Space for Rent at E. Harlem’s La Marqueta, Along with Real Tortillas for Sale 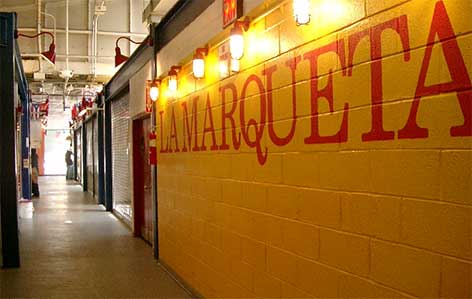 A seriously impressive facelift for this public market built in 1936.

Last week we stopped in to visit the newly refurbished La Marqueta in East Harlem, the indoor, city-owned food market on Park Avenue between 111th and 119th Streets. It was established back in 1936 by Mayor Fiorello LaGuardia, who wanted to rid the city of its pesky pushcarts, who after 70 years, are finally bouncing back.  So is La Marqueta: It had, until recently, maybe not been worth the trip even if you lived in the neighborhood.

But with a city-backed revamping, the place is now home to new vendors such as Breezy Hill Orchards, which sells pies and apples and tamales, and Berried Treasures, whose potatoes, greens, berries and tomatoes you may know from Greenmarkets; note that they still the same smoked and dried West African fish the former tenant of the stall did, too. Even more impressive is the massive Hot Bread Kitchen Incubator, which provides affordable slots of commercial kitchen space by the hour or day or week or month to up and coming food businesses, and also makes its own incredible line of breads.

Launched by Jessamyn Waldman back in 2007, the non-profit bakery trains and pays lower-income women in jobs in food production and manufacturing, often letting them launch new product lines — lavash, Sephardic challah, Moroccan flatbread, corn tortillas — based on the traditional breads they may have grown up eating. Or in many cases, we think, perhaps even better than the traditional breads they may have grown up eating: At Hot Bread we saw one employee grinding nixtamalized corn into fresh masa for tortillas, something that doesn’t even happen that frequently in Mexico anymore, outside of small villages. The tortillas are amazing, and yes, you can buy them at La Marqueta.

The incubator is one of many “Affordable Workspaces” the city has created in recent years, which include some basic business services like internet access, fax machines, copy machines and conference room. Though if you are looking for a place to make and sell food products, Waldman told us there’s also a prime production/retail space available at La Marqueta right now. We’d make the trip to visit, for sure.