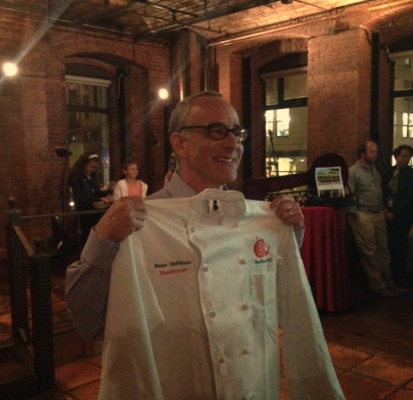 In an Astor Center celebration that felt like a lifetime-achievement award party, the non-profit hailed Peter’s 35 years of “leadership in the farm-to-table movement and his commitment to a local, sustainable and fair food system. “

The room was packed with people who love Peter, a few of whom took the stage to toast him. Author Tevere MacFadyen spoke for many of us when he said, “What Peter taught me — more than knife skills, how to butcher a whole fish or how to save a sauce (butter, always more butter!) — is that food is a noun, and that verbs matter more than nouns. And the verb that matters most with Peter is ‘to care.'” Amen.

But the most moving homage came from Chef Caroline Fidanza, famous for Saltie, and before that, for founding the Brooklyn food experiment in the kitchens at Andrew Tarlow’s visionary Diner. She says it never would have been possible without Peter.

In Caroline’s own words:

When I was a kid no one went to cooking school and no one ever thought about chefs. Pretty much nobody went out to dinner unless someone got married or a good report card.

When I went to cooking school it was just the beginning of the trend of normal people or “everyone else” finding out that cooking was a legitimate profession. I went to cooking school because I wanted to learn how to cook. I liked to eat and was interested in working with my hands. I was mildly aware of the profession and I certainly never thought about being a chef.

I believe truly and completely that if I never found Savoy I would not be working in the restaurant industry today.

But there was Savoy. A spirited kitchen full of smart, funny people who cared about what they did and were willing to teach me — with no practical experience and a macrobiotic culinary education — how to be more like them.

How to break down a leg of lamb, a rack of venison, or a twenty pound fish, debone a rabbit or a suckling pig, kill and skin an eel, cook an octopus, salt-roast a duck, stuff a sausage.

Savoy was an ambitious kitchen and everyone was expected to give it all they had.

Every cook had a day that they had to go to the Greenmarket hours before their scheduled shift, list in hand to shop for the restaurant lug everything to the curb, hail a cab and come back to prep and serve dinner.

Sitting on the Crosby street bench shelling beans and waiting for the call of “order in” to rouse us back into the kitchen.

Shucking fava beans to order because we could never keep up.

Boning out rabbits on the station in between tickets.

Receiving venison delivered by a friend with the buckshot still in.

Eels bought in Chinatown skinned by being nailed to the cutting board and pulled apart with pliers.

Farmer Guy Jones arriving with a late delivery and staying to eat a plate of food on the garde manger station.

Dinners cooked on an open hearth that required the cook to shuttle food back and forth between kitchen and fireplace through the bar and the seated guests.

Peter talking on the old kitchen phone while breaking down ducks.

Speaking French to the waitress.

I learned through Peter that you could have a place that was about what you were about. A place where your personality made it what it was.

Peter is well known for his contributions to the good causes of sustainability, seasonality and local food. He is perhaps less known for mentoring a generation of cooks who carry on in the spirit he instilled in them. But there are many of us out there.

There are people you meet who change the course of your life. For me, that’s Peter. 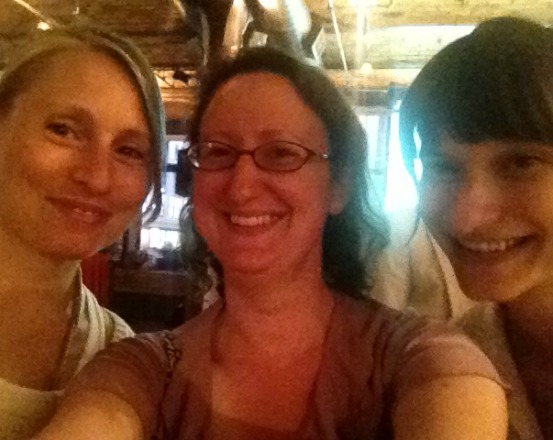 Then Peter took the stage; I’ve excerpted from his remarks here:

To Slow Food — for recognizing chefs like Mary Cleaver and Bill Telepan and now tonight, me. And for promoting the idea of diners as co-producers, not just passive end-users, consumer pawns of industrial food.

Caroline: There are many alumni of Savoy and Back Forty, many generations who have passed through and many who have taken our credo into their work but none is a more aligned practitioner than Caroline. She cooks, writes and speaks from the heart. Her food and her thinking is insightful, clear and personal. Go eat at Saltie in Williamsburg if you haven’t already.

To Mom: who brought good food sense, and a seasonal sensibility to the dinner table: rhubarb compote, celery root salad, cold yogurt soup and heaping platters of asparagus. Thanks for my first job as a sous chef where we spent time prepping dinner together, shelling peas and talking about girls.

To Dad for loving food so much, unabashedly exclaiming the glories of taste. “Wow! Taste these Jersey tomatoes. Really? How can you not like tomatoes?” And eventually realizing in spite of his overbearing manner that he was right. And for his interest in food as a joyous cultural expression, especially from our Armenian neighbors with their love of garlic, eggplant and grilled lamb.

It’s so important to have a partner with whom you share a vision and can work with to realize it. Susan has always been that partner. We built Savoy together, physically and conceptually; the feeling, the warmth and the honesty and still today she keeps redefining what we are at Back Forty and Back Forty West. Once it was biscotti and now it is bisqued mugs and votives — your artistry is always on premise, part of the definition of who we are.

I am a chef and a restaurateur but I have always had a bigger agenda than just serving meals to hungry people; it includes bringing about political, social and values changes. I came across this passage many years ago and I return to it often; it’s “the star to my wandering bark.”

“The pleasure of eating should be an extensive pleasure, not that of the mere gourmet. Eating with the fullest pleasure — pleasure, that is, that does not depend on ignorance — is perhaps the profoundest enactment of our connection with the world. In this pleasure we experience and celebrate our dependence and our gratitude, for we are living from mystery, from creatures we did not make and powers we cannot comprehend.” — Wendell Berry, “The Pleasures of Eating”

I am a community organizer and these accomplishments might be more important than what I’ve done as a chef. I built community amongst and for food folks; fostered businesses, gave out sources for others to buy from and offered up the corner of Prince and Crosby as a place to gather, eating based on our values, and connecting people with unbranded stories about where our food comes from, what makes for great taste and what impact our food consumption has on the planet. The dinner series, my upstairs salon, allowed others to share and teach over a fine meal and some good wine. Farmers, thinkers, writers, poets have all spent evenings telling stories to us, evolving our understanding of the relationships between the food we eat and the world we inhabit.

Even before Savoy, I organized chef picnics in Central Park; there are a few of you here who attended those. Early on, I longed to build a community of the new generation of American chefs. I guess that morphed into my work with Chefs Collaborative including six years as chair.

My family has sat and groaned through numerous farmstand visits where I inevitably ask a question about farm practices and a 45 minute conversation ensues with the farmer explicating on the influences of soils, sun exposure and slope to particular heirloom varieties… but now today they look up and remark on the quality of someone’s asparagus or berries and say “Whose are these? Keith’s, Maxwell’s?”

The food movement has come so far in the last 25 years. I have been part of the change, one of many voices across the nation pushing this agenda, demanding an approach to food policy that is more holistic and supporting businesses that practice that more enlightened approach. How do I measure my impact? One is by seeing all of you, food activists in one way or another. Another is generations of chefs, cooks, managers, restaurateurs some present, who took the ideas and the passion and principles from my kitchen and applied it into their own work. Now running radio stations, kitchens, or just supporting an economy of good food, good environment producers by gleaning the market for the best string beans but also organizing to stop energy companies from sullying our landscape.

We need to continue to demand that the desire for cheap energy and cheap food doesn’t trump the absolute importance of clean food biodiversity on a healthy planet. We need to demand that our government enforces safe and sanitary standards. Now looking at sustainability in a larger framework, thinking about climate change and the possibility of fracking in New York State as a food, health and energy issue.

“I still think that one of the pleasantest of all emotions is to know that I, I with my brain and my hands, have nourished my beloved few, that I have concocted a stew or a story, a rarity or a plain dish, to sustain them truly against the hungers of the world.” — MFK Fisher, The Gastronomical Me

Today is Susan and my wedding anniversary. I remember a few things from that day 26 years ago: the soft shell crabs, dancing to the Microscopic septet, the tension I released when I smashed the glass and in thanking everyone present: “It’s not ‘thank you for being part of my life,’ you are my life.” And I feel the same way to today — you are my life. Thank you.