The Night Is Full of Feasts: Celebrating the Release of The Way We Ate

Flipping through this book is so much better than your average, workaday recipe compendium. It’s about history, and memory and cultural connection. 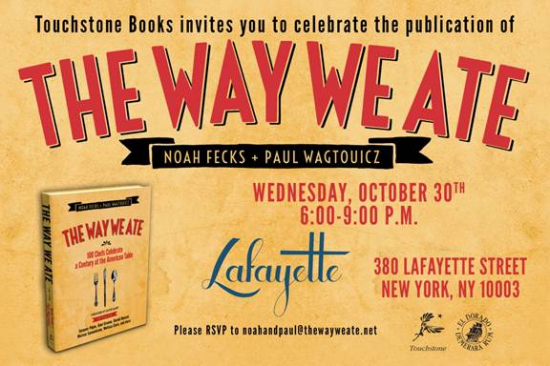 Last week, I met a friend for dinner at Joe & Misses Doe, the newly reincarnated, more casual version of chef Joe Dobias’s East Village eatery. When I managed to look up from the eyes-bigger-than-my-stomach plates we ordered of plump and piled-high deviled eggs, crazy-good hot-sweet fried matzo, sticky-finger-lickin’ wings, spicy-tangy hot-dip chicken and an epically large bowl of mussels and clams in a steamy, wine-spiked broth, I saw a golden-yellow book propped up on the bar that had just hit my desk the week before: The Way We Ate by Noah Fecks and Paul Wagtouicz.

Turns out, Joe told me, he is in the book—fittingly, after eating that pile of seafood, for his Long Island “Sound Off” listed on page 73 for the year 1922 in a lovely nod to Long Island’s Gold Coast, the scene of much decadent seafood eating and setting for that most famous of fictional fancified dandies, Jay Gatsby.

And this is what this wonderfully, irresistibly loopy, edible trek through history is—a century of year-by-year celebratory stories (written by Feck and Wagtouicz) and recipes contributed by a head-spinning who’s who in the best possible sense of that term. Alongside your Boulud’s and Pepin’s and Reichl’s you also find local heroes and characters, like Aldo Maiorana of Greenport, Long Island’s Aldo’s, the eponymous famed roastery and coffee spot that chased Starbucks outta town, the inimitable and lovely Melissa Clark, whose weekly New York Times missives have inspired a multitude of weekday meals in my house, and Back Forty’s chef Shaunna Pacifico, who, despite being a grown, confident woman with the kind of culinary chops that ensure her a long life in this business, giggled like an embarrassed teenager when telling me about her assignment for the book during the launch party last night at Lafayette: creating a recipe inspired by the 1998 release of Viagra (page 328, “Spanish Fly” Granita).

Flipping through this book is so much better than your average, workaday recipe compendium. It’s about history, and memory and cultural connection, and every single time I open it I am not only treated to the authors’ gorgeous photos, but a laugh or a sigh or a funny factoid that I can’t wait to share with a friend or a sister or a husband.

“We’re really photographers at our core, but at the end of the day we wanted to work with friends,” smiled Fecks outside his shindig, the cars whizzing by on busy Lafayette Street. “The reason we wanted to write this book? There’s nothing out there like it!”