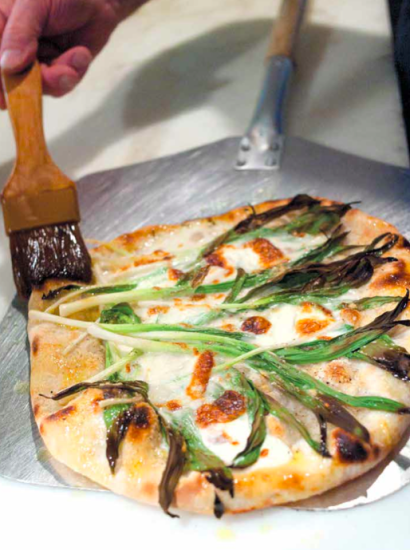 Back in 2005 when Cookshop flung upon its doors on a no-man’s-land stretch of 10th Avenue, a surprising design element turned many diners’ heads. No, it wasn’t the Highline and subsequent soaring high-rises—this was well before they would pop into the skyline in Chelsea’s Wild West just outside the dining room’s gorgeous, sunset-facing windows.

Rather, the thing that got people talking—that is, other than chef Marc Meyer’s elevated American cooking—was a simple chalkboard.

It was a bit of happenstance that made Meyer first list the names of local farmers and fishers on the now-famed six-foot blackboard in Cookshop’s sun-drenched dining room. The original plan was to list their wines by the glass, but there were too many, and Meyer, his wife, Vicki Freeman, and their business partner, Chris Paraskevaides, ran out of time to write them up before service.

After thinking about it, Meyer said simply, “Let’s put the farmers,” and quickly jotted down their names. It seemed natural, but back then, farmers’ names, literally writ large, were rare enough in a Manhattan restaurant that Frank Bruni noted the star treatment in his 2005 Times review. Elle magazine later photographed it for their glossy pages.

But while the list captures the restaurant’s central tenets, Cookshop isn’t about naming names. Meyer is a quietly passionate man, less interested in being lauded for his locavorism (Mimi Sheraton recently grabbed him by the arm to declare emphatically, “You are an unsung hero of New York”) than in shining a light on the great bounty of ingredients around him.

Meyer takes his sourcing seriously. That doesn’t mean checking off boxes on a list from a giant wholesaler, but rather taking his kitchen staff on field trips from Virginia to Vermont to make personal connections with the farmers he buys from. It means making his own vinegars and buying only American-sourced cheeses (including the nutty, domestic SarVecchio, a dead ringer for imported Parmesan).

And local alone doesn’t pass muster: He recently broke up with a chicken farmer because the chef was unhappy with his methods, insisting instead on birds that get more time on green grass.

Over at the bar, Vicki is working toward getting rid of soda entirely and replacing it with fresh-pressed sparkling juices. (“It makes me ill to see what he sources locally and cooks to order—and then someone will drink five Diet Cokes with it.”) Those obsessively sourced dishes include a daily North Atlantic seafood menu, offering the likes of tender, slender razor clams with a spicy parsley pesto; crunchy but light as linen beer-battered fried smelts; and the buttery, velvety North Fork whelks—conch-like bits of meaty goodness bathed in butter.

“I started looking at ingredients for their flavor and texture and how they responded to cooking,” Meyer says simply. “Like, how brilliant in color the parsley from Long Island was and how long it lasted when it was so fresh. That’s what started the wheels turning.”

Truthfully, the wheels were turning long before that. As a kid in Hempstead, Long Island, Meyer says his family meals didn’t possess the kind of cultural lightning rod that some chefs draw on for lifelong inspiration. “If you grow up in any ethnic circle, you have a different culinary reference point. Like, ‘This is what you do with spinach or lamb.’ I didn’t have that, so it’s been an ongoing search to give that idea life.”

But when his military dad was transferred from their Hempstead home to Germany when Meyer was seven, something started to, well, germinate. He not only developed a love for that country’s sausages (something you will see reflected in the housemade links that often appear on Cookshop’s menu) but an appreciation for the European model of eat-what’s-around-you. Still, it would be many years before those values would blossom into a career. You could say that’s because as a kid born in the ’50s, Meyer wasn’t raised in an era when chefs (or farmers) were popular career choices, much less high-profile celebrities.

His family moved back to Long Island when he was 11, and when he graduated high school in the ’70s, Meyer headed to UC Berkeley to study architecture. While there, he worked in a kitchen to make extra cash and spent some free time watching the action at a friend’s family’s little Chinese food joint across from campus, where they let him stand around the stove and watch how things got done. Then he spent a summer working on a crab boat in Alaska. And then, to his parents’ great chagrin, he dropped out of college in his senior year, basically out of boredom. Not to cook, he says, but he was good enough at it that when he headed back to the East Coast he landed a job with Patrick Clark at an exciting new spot downtown: Odeon.

After a year and half at the stoves, Meyer knew the kitchen was his true path. He left to work in Rome in the early-’80s, living in a tiny apartment with no shower (he had to use one at the nearby train station), and learned to make pasta as well as the art of a good braise, how to cook an artichoke, make sausage and perfect a galantine (deboned, stuffed fowl). All the while, he dove into Roman food culture, eating often at the little tavole calde, Rome’s version of a fast-food restaurant, offering a market-fresh delight of a daily changing buffet.

Back in New York in 1983, he quickly impressed chef Larry Forgione—owner of the famed American Place, where New York diners first became keen on the concept of American ingredients over European imports. Forgione was big into small farmers, long before words like “locavore” entered the lexicon, and word soon spread.

“We had stuff showing up at the back door—mushrooms, uneviscerated ducks and chickens that we had to clean.” Meyer stayed on with Forgione for five years, but the fine-dining world felt like a tight collar around his neck, so when an opportunity arose to head back to the casual West Coast and helm his own stove at Brasserie Savoy in San Francisco with all that fresh California abundance right outside his door, he took it.

But while Rome and California were experiences that shaped him as a chef, they weren’t home. So in the early ’90s, when Meyer got word of a new American-minded spot called Vic’s opening on Broome Street in SoHo—owned by a smart, cute blonde with a lifetime in the restaurant and food biz and a lot of moxy—the time seemed right to head back East. Vic’s didn’t make it much more than a year, but Meyer and its owner, Vicki Freeman, did. The two were married, and Vicki went to work in high-end catering while Meyer was plucked by Jonathan Waxman—the West Coast ex-pat who skyrocketed to chef stardom in the mid-’80s at Jams, and who now owns Barbuto—to consult for his restaurant group ARK. At the time, Freeman’s good friend Chris Paraskevaides was a very successful behind-the-scenes guy for the BR Guest Restaurant Group, running 13 places at once. As it turned out, he wasn’t in love with what he was doing either. By ’98, Meyer, Freeman and Paraskevaides figured out how to get Five Points off the ground doing exactly what Meyer had always wanted—although not quite.

When they opened Five Points in 1999, weaning Veruca Salty-ish diners off of their standard hit parade items was not easy. People just didn’t eat with the seasons back then—or, at least, not in the full-on way that Meyer wanted to cook. He was seeking out Berkshire pastured pork and Vermont grassfed lamb, but eschewing tomatoes and strawberries when he couldn’t source them from the Greenmarket.

“People would get annoyed that we wouldn’t give them a tomato salad; saying you didn’t have it was like saying you didn’t have water. Same thing with telling them you didn’t have any loin lamb chops,” says Meyer, who early on was going “whole hog,” buying entire carcasses from small farmers, butchering them in-house and finding ways to use every last cut. “There are only so many loin lamb chops to an animal, and so many [other] parts you can use, and we were using the whole thing. Back then, people would say, ‘Why can’t I get what I want?!’ but today nobody says boo about how we do things.”

But to really do it right, he needed more space. So Meyer walked the streets in search of the right spot, and as he wore out shoe leather and examined buildings and neighborhoods up and down, east and west, he came across a westerly facing corner spot, all windows shining in the sun. Back then there was no Highline to practically spoon customers into Cookshop’s long red banquettes—in fact, the then-planned Highline and its pile of weeds were on the chopping block to be torn down. Even Appellation Wines was months from opening. And the nearest subway was two extremely long avenue blocks east.

“Marc told me about the space, and I said, ‘No way! It’s in the middle of nowhere!’” laughs Freeman. “But he was pushy. The minute he, Chris and I walked in together we said, ‘YES!’” And so, Cookshop was born.

It was Five Points on a larger stage—3,500 square feet, to be exact. And that space was a means to do all the things he’d wanted, like having a dedicated butcher on staff; a stone oven to roast meat and fish and bake bread; an entire station just for making pasta; separate walk-ins for meat and produce; all open for breakfast, lunch and dinner.

But despite the philosophy, Cookshop never feels parochial or restrictive; instead it has maintained a steady, celebratory huzzah! for the abundance that surrounds the city. From the housemade, puffy-centered focaccia, to Long Island mollusk–brimming seafood stews, to meaty Finger Lakes duck confit as tender as a marshmallow—four days in duck fat and flame-licked to a giddy crisp in the stone oven—there’s a generosity and love in the preparation here that speaks to Meyer’s wonder at the edible world around him.

In 2008, Meyer, Freeman and Paraskevaides opened Hundred Acres on MacDougal Street, a casual, airy, open-door spot with the feel of a market-driven French bistro with American roots. But Cookshop, as Freeman puts it, remains a spot that combines all the things that she, Meyer and Paraskevaides believe in within the practical confines of running a busy New York restaurant.

“It’s like jazz, you know? Marc is nonstop improvising,” says Paraskevaides, smiling at his old friend. “He’s a great musician.”

Meyer grins gratefully and looks down at the table, the afternoon light glinting off his glasses. His accomplishments are many but his focus is on the work ahead. “To keep going is an opportunity to take this approach and make it a dynamic thing that will continue to be viable,” he says, his voice low and serious. “It’s my belief that this way of cooking is not only of this time; it’s an ideal.” •

While researching this story, Amy Zavatto was delighted to discover that Cookshop serves breakfast. She’s the deputy editor of the magazine.