Does the California business make sense as a sustainable choice for New Yorkers? 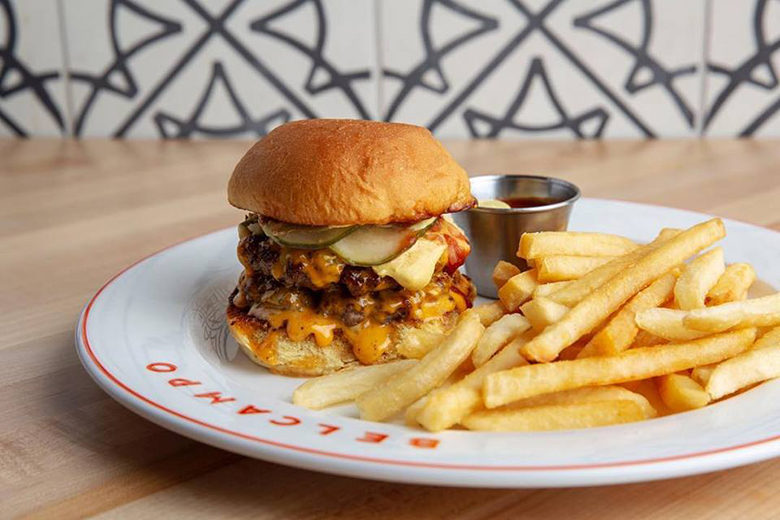 Sitting at farmhouse-inspired chairs inside, a question lingers after every juicy bite: How “sustainable” is the model once the farm is 3,000 miles away?

“You’d be amazed how many of our customers who come in are not interested in the supply chain,” says Belcampo co-founder Anya Fernald on the phone from Northern California, where she is trying to recover from a long week of opening the restaurant group’s first out-of-state restaurant, inside the Shops at Hudson Yards in Manhattan.

That fact amazes Fernald because she’s personally obsessed with it. In fact, she built Belcampo as a conduit for creating a scalable supply of American beef that would be better for eaters and the planet. And while her customers may not care that she’s doing that by owning said chain—from farm to slaughterhouse to restaurant—they do care about animal health and human health and flavor, she says.

“My sweet spot is around approachable foods,” she says. “I want to serve things that you like that you can feel really good about eating.”

Fernald started Belcampo with business partner Todd Robinson in 2012. The company owns a 24,000-acre ranch where cows are raised using organic, grassfed practices. Not only do the cows only eat grass, they’re on pasture longer than in other systems (26 to 28 months), which “makes a huge difference in taste quality,” she says. Farmers also raise pigs, chickens and lamb and the company practices whole animal butchery, which means almost nothing goes to waste.

Belcampo’s meat ends up on plates in its six restaurants in California, some of which are also home to butcher shops, and is sold online for national delivery. At the Hudson Yards location, the menu includes starters like beef tartare and charcuterie, three different burgers, meaty salads like a steak and veggies and a bacon kale caesar, and bone broth soups. (There is also some packaged meat for sale, including sausages and ground beef, although it’s not a focus because, “my thinking was people don’t want to walk around Hudson Yards carrying raw meat.”)

Sitting at farmhouse-inspired chairs inside, a question lingers after every juicy bite: How “sustainable” is the model once the farm is 3,000 miles away?

“What I decided to do is transport everything frozen so I can aggregate into big shipments, which is better from a carbon perspective,” Fernald says. She also hopes to broaden her supply chain in a few years, with the ultimate goal of having East Coast farmers become part of a kind of Belcampo network.

New Yorkers are also likely to expect a more comprehensive farm-to-table approach at a place with such high standards for meat, but the focus barely extends beyond the animals. Fernald says she does buy organic greens but that the rest of the produce is conventional, and there’s no real commitment to buying from local growers. (Although she says that may come later, as it has at other restaurants that have been open longer.)

The strange thing is that while this may feel like a disconnect for an eco-conscious New York eater used to picking up a weekly CSA and frequenting the city’s many farm-focused restaurants, Hudson Yards might as well be across the country, from, say, a couple ordering grassfed burgers and local vegetables at Diner in Brooklyn. Inside the marble-floored mall, past H&M, Zara, and before you turn the corner to get to Shake Shack, Belcampo is slinging burgers in an upscale, expensive version of Anywhere, USA.

Just like Fernald made a choice to not overwhelm people with supply chain specifics, she made a choice to keep prices on other ingredients down in order to focus on the meat of the mission. “Our fight to fight is around regenerative ag and livestock,” she says, “and that means selling as much meat as I can at the price point I can.”