This article appears in Spring 2018: Issue No. 54, the collective of Edible Manhattan.

Local orchards are notorious for needing a lot of chemicals but seasoned agricultural consultant Mike Biltonen is bucking conventional wisdom with promising success. 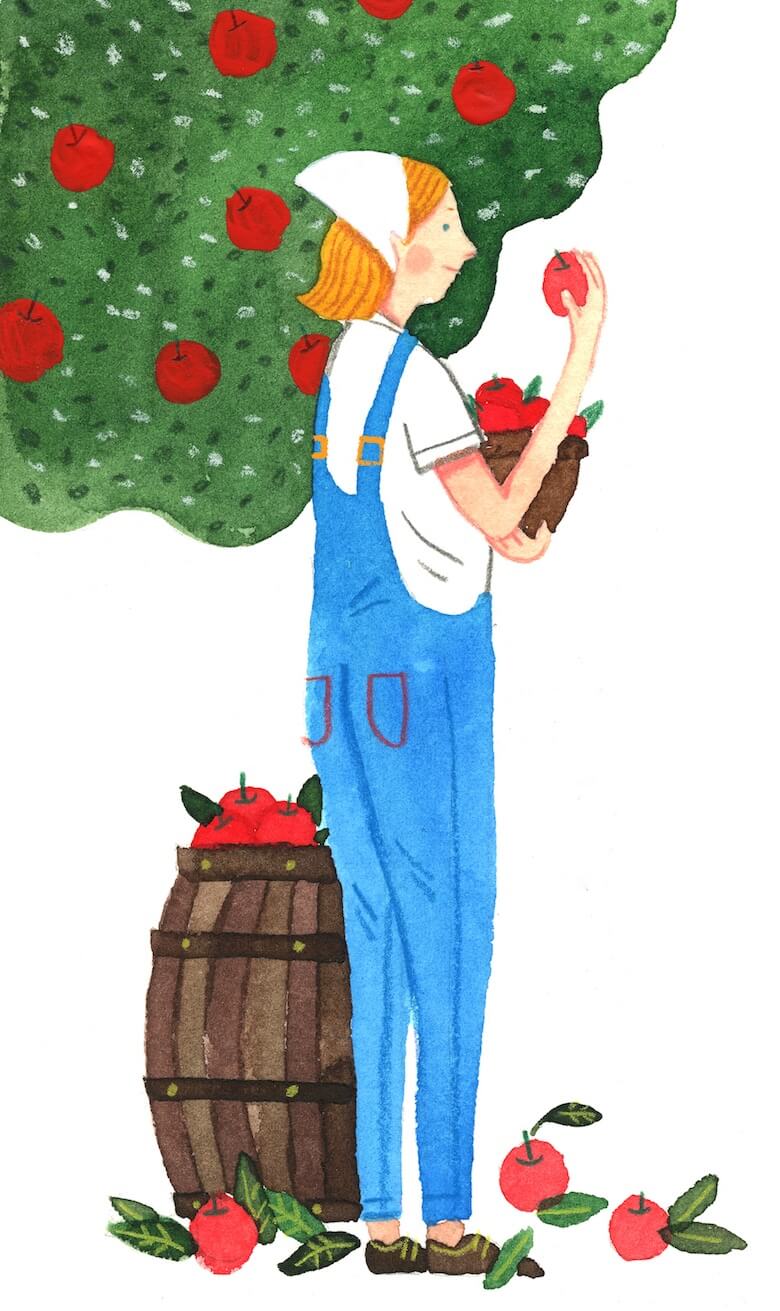 “With dead soil, the fruit tends to be water sugar and acid. When you ferment the sugar away, it reveals what’s left,” cider maker Autumn Stoscheck says. “I believe the way you grow the apple matters for the quality of the cider.”

After her daughter was born, cidermaker Autumn Stoscheck continued her daily work in her Finger Lakes orchards, now with a newborn strapped to her chest. The routine only changed during the spraying season, when the toddler stayed home away from the chemicals. But everything changed for good one evening. Stoscheck had a revelation when she was where all revelations emerge, in the shower.

“I realized this is not coming off my body. It’s going into my body and I’m feeding it to my child,” she says. “This was a point of no return. I had to figure out how to not use those chemicals.” And just like that, in the spring of 2007, the founder of Eve’s Cidery decided to switch to organic farming, about which she knew nearly nothing.

Almost no one else seemed to know anything. There wasn’t a manual to turn to or examples to follow. People said you couldn’t grow organic apples at a commercial scale in the cool humid East Coast. But eventually Stoscheck’s determination was validated when she met Mike Biltonen and his squad of “fruit geeks,” a small group of growers who met occasionally to share their trials of organic farming over beer.

Biltonen was a rare find. The 54-year-old horticulturist and consultant has a foot in both conventional and organic fruit production with three decades of experience, and his unique vision for the future of sustainable growing has put him at the helm of a small but determined shift away from conventional ways toward more ecologically sensitive methods. His 20 or so clients, who run orchards in a wide area from Long Island to the Hudson Valley to central New York, may be the first waves of a tidal change that multiple forces are making inevitable. Organic fruit production is being massively ramped up in places that already hold major shares of the apple market, like Washington State, creating a future market in which conventional apples of the Northeast will be even less likely to be picked by consumers. As more people start to remember the true taste of apple, flavor will become critical, especially for farmers hoping to feed a promising trend of sophisticated cider. And all this is happening under a looming fear that trees grown conventionally in soils hollowed out by years of intensive inputs and practices are not robust enough to indefinitely weather the rapidly changing environment and inevitable arrival of new diseases.

“Mike keeps up on all of those stuff and is willing to take risk,” Stoscheck says. “He encourages growers to take risk and experiment, too. That’s really important for moving this entire mini industry forward.”

As someone with such a close touch with the land and a champion of better farming, it may be surprising that Biltonen himself did not grow up on a farm. “I certainly didn’t think I wanted to be a farmer when I grew up,” he says. Raised in an academic household, his first real brush with farming was at the end of his sophomore year in college when he took a summer job at an orchard. The fruit was fresh, people were great, and every day was a new day. He developed a passion, which sent him to a master’s degree in horticulture from Cornell University and set the stage for a life of the outdoors and experimentation. And a lot of what happens in avant-garde organic farming is experimentation. What indigenous microorganisms live in the vicinity of your land? Which can benefit your soil? How does a new product from a biointensive research company perform? “Mike keeps up on all of this stuff and is willing to take the risk,” Stoscheck says. “He encourages growers to take risk and experiment, too. That’s really important for moving this entire mini industry forward.” 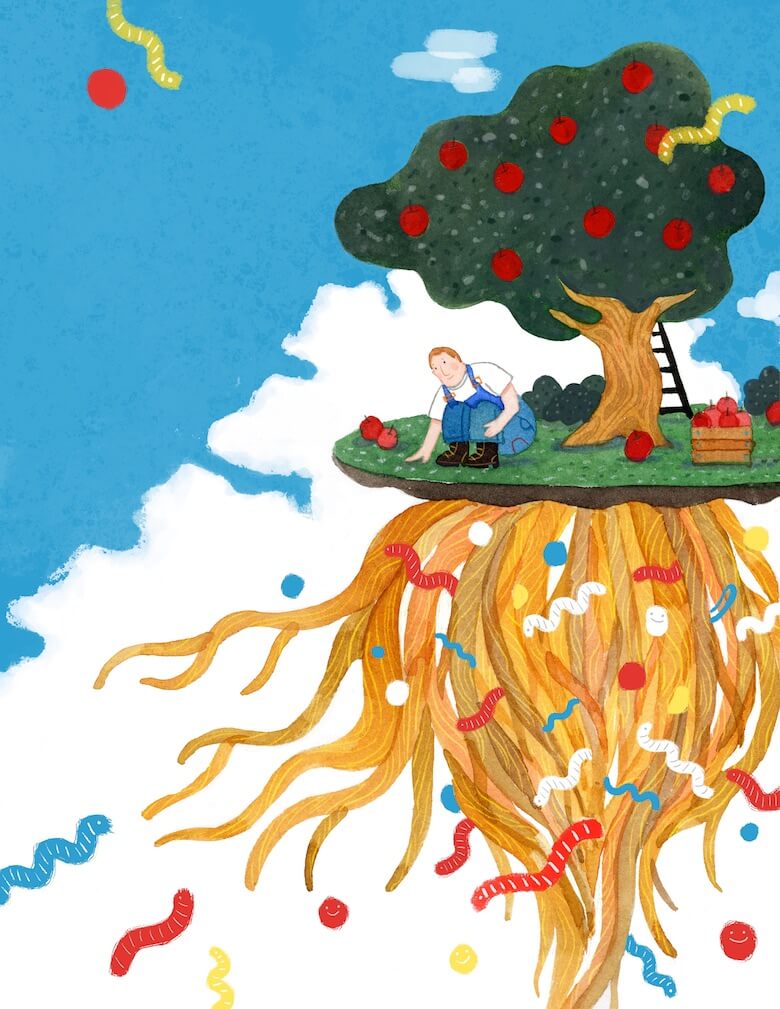 Mike Biltonen’s 20 or so local clients, who run orchards in a wide area from Long Island to the Hudson Valley to central New York, may be the first waves of an apple growing tidal change that multiple forces are making inevitable.

Biltonen, who primarily works with apples and other tree fruits, has a solution or at the very least some inkling of a solution for tackling every challenge nature throws at orchardists—from five major diseases that threaten apple trees in the region, to the dozen different insects that feed off the crop to the climate changing unpredictably every year from cold to hot, wet to dry. Whether growing organically or conventionally, all farmers face the same basic biological reality, Biltonen says. How to deal with the issues, however, depends on your philosophy. And his is a holistic, biointensive one, focused on using tools already present in nature. But far from a return to the pre-synthetics era when tree growers had to blindly work with whatever nature gave them, Biltonen’s methods—including a mix of biodynamic, holistic and USDA-certified organic techniques—rely on brand new science. “Fifteen years ago I thought: We don’t have the tools for a huge shift in the way we grow fruit in the Northeast,” Biltonen says. “There’s now a real burgeoning amount of knowledge and technical expertise in biointensive fruit growing. There is pretty extraordinary information out there that researchers are discovering, and farmers are figuring out how to apply them. Not just in an esoteric, small backyard scale but on large acreage of cropland, and they are getting better yield.”

What has made this all possible is a deeper understanding of the web of interacting invisible forces that govern the health of the soil: the bacteria, fungi, micro arthropods, nematodes and earthworms, which feed each other and become food for overground dwellers like mice and birds. In the process, they breakdown compounds and convert nutrients to plant food. “This biological part of the soil is where we are finding we can have the most influence on the whole soil environment,” Biltonen says. So he keeps a close tab on this bustling underground food chain where interactions are dynamic and can go awry, or sometimes entirely missing, due to overuse of chemicals. He cultivates a base of beneficial fungi and bacteria to reinvigorate the soil and manages diseases by introducing the right organisms that can outcompete pathogenic fungi and bacteria. By not killing everything with synthetic solutions, the plants will have access to biochemical compounds they need for developing immune systems strong enough to fend off diseases on their own.

Biltonen has a solution or at the very least some inkling of a solution for tackling every challenge nature throws at orchardists—from five major diseases that threaten apple trees in the region, to the dozen different insects that feed off the crop to the climate changing unpredictably every year from cold to hot, wet to try.

The biochemicals left untouched in the soil are also the components of vitamins, minerals and enzymes—things that give the fruit its nutrition content, flavor and aroma. Stoscheck saw this as an opportunity to create cider with more texture, perhaps even with a character complexity akin to that of wine. She now produces her cider entirely from apples she grows using biointensive methods and is one of the handful of organic cidermakers in the state. The results have been spectacular, winning her awards and popularity among cider aficionados and makers alike. “With dead soil, the fruit tends to be water, sugar and acid. When you ferment the sugar away, it reveals what’s left,” Stoscheck says. “I believe the way you grow the apple matters for the quality of the cider.”

It’s a novel idea that would need some time to gain a wider acceptance, she says. But a rising cider industry, destined to pull up the beverage from the neglected bottom of the drinks menu, might facilitate that. There are now about 80 cider producers in New York State, up from 35 in 2014, and three 10 years ago. “Their growth is tremendous,” says Dan Pucci, co-founder of Wallabout Hospitality and Events who served as the first cider director of Wassail on the Lower East Side. Most of these ciders are still made from conventional apples, but more and more people are paying attention to cider and they will begin to notice the differences in cider made from high-quality naturally grown apples, he says. It’s not entirely unthinkable that regional cider could one day become a sophisticated and prestigious product throughout the Northeast. But for that wish to happen, more people have to join the line of work currently occupied by Biltonen and only a few other consultants, most of whom are already on the verge of retiring. To guide enthusiastic farmers to make their transition, “We need people more like Mike,” Pucci says.