Audrey Saunders of Pegu Club is a Mixed-Drink Matriarch 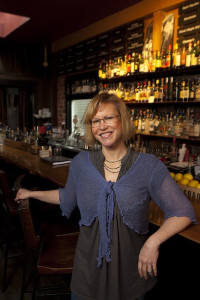 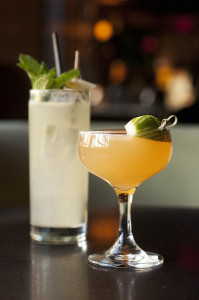 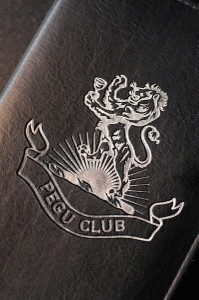 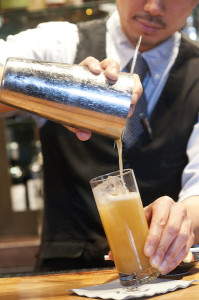 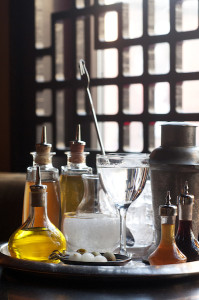 Someone tweeting as the Goldman Sachs elevator recently posted an overheard snippet of snark: “Thanks to the economic crisis, bartending got upgraded from a job to a career.”

One woman who isn’t laughing is Audrey Saunders. Cocktails are now an obsession and a noble profession, and not because of the Bushwhacked economy. She built that.

Before Saunders came to prominence in the late ’90s, Manhattan was a drinks wasteland where a Cosmo was about as sophisticated as it got, at least until the Appletini wormed along. The stirrers and shakers were nearly all men, and women behind the bar were too easily written off as “a pair of boobs and a smile,” Saunders says.

Dale DeGroff, who put “mixologist” in the restaurant lexicon and craft cocktails on every drinks list, became Saunders’s guru just as he was starting to gain renown for both restoring cocktails to their pre-Prohibition glory and inventing new drinks with a craftsman’s touch. With her training in French cooking and her Swiss-German work ethic, Saunders took his lessons to another level, treating the cocktail as “a culinary creation of complexity.” Her Old Cuban is just one sparkling example: the Mojito put through finishing school with Champagne, Angostura bitters and a sugar-coated vanilla bean.

But Saunders’s supreme contribution to cocktail culture is the Pegu Club. The bar on West Houston Street, which she opened in 2005, set the national standard. In a world awash in flavored vodka, she chose to emphasize gin. She brought bitters to prominence; she insisted on fresh juice, special ice, smaller glasses.

Tellingly, Saunders prefers the muscular “bartender” to the effete “mixologist.” Chef Waldy Malouf, for whom she developed a drinks program at Beacon in Midtown after Blackbird closed, calls her “the most hardworking person I’ve ever met, other than myself.” DeGroff took her under his wing not least because she was willing to work pro bono at gigs that involved loading the truck after shaking drinks for hours.

But she also brought to the bar a singular background, having grown up on Long Island with parents who loved to entertain and knew from mixed drinks, and more important, having taken classes in five levels of French technique at Peter Kump’s cooking school (now ICE on 23rd Street). The notion of “cooking” cocktails struck an 80-proof chord. When she worked with Malouf at Beacon, the seasonal cocktail program was paired with food, and featured fresh ingredients in the drinks, too.

“The menu would change, the cocktails would change, and everything had to make sense,” he recalls. “We’d roast fresh tomatoes for Bloody Marys, grill pineapple… .” And that was in an era when most bars were cracking open bottles of premade mixers and Greenmarkets were still novelties.

Saunders could be considered the accidental bartender. A dropout from Long Island University, she had moved into Manhattan in 1985 and was working with the childhood sweetheart she had married. They had a business (which he still owns) dry-cleaning walls hung with silk or tapestry in the palatial apartments and offices of the rich (Bill Cosby, Lorillard Tobacco) when they divorced and she decided “it was time to get a life.”

In 1995 a friend at the Waterfront Ale House gave her a couple of shifts and she recalls it as a eureka experience: “The moment I got behind the bar, I knew. That’s it!’” She loved not just pulling pints but the camaraderie and the service. The manager “spent a couple of weeks trying to talk me out of it—it’s hard work, no insurance, moving kegs. But if I’m going to get into something, I’m giving 100 percent. There are no shortcuts. So I stuck to it.”

Two weeks into that gig, her manager arrived with a New York magazine photo of DeGroff at the Rainbow Room and an item on a one-night seminar on “the business of the bar.” Saunders signed up. “I was enthralled watching Dale doing cocktails on a culinary level. After class I went up and said: ‘I want to be the best I can be, and I’ll work for free.’”

The Rainbow Room was unionized but did charity events off-premises, and soon DeGroff called and said, “Come on, Honey, let’s go. We’re going to Gracie Mansion to make cocktails.” On her first outing, Saunders mixed up Mary Pickfords, with rum, pineapple juice and grenadine, and found “interacting was so much fun.” As DeGroff recalls: “She just sparkled behind the bar.”

In 1999 the Rainbow Room closed, DeGroff went to Cipriani and then opened Blackbird, which really was revolutionary. He hired his acolyte and continued her education. “Every day Dale was teaching me something new. Every day was like Christmas.” She learned stories, tried cocktail shakers, read rare books and old recipes so intently she often fell asleep reading on the train home at night.

She learned how, after Prohibition, bartenders lost their skill set. As with the rest of the American diet, convenience products reigned. “It was the age of Tang and Foamex,” Saunders says. “Things had slid down the mountain, and there was a lot to restore. Dale was doing those things. Blackbird was an amazingly fertile time for us.”

Her stint there also occurred as William Grimes of the New York Times was applying his scholarship to the art of the cocktail, which gave a huge boost. But the restaurant closed, DeGroff started consulting and she moved on to Beacon, where Malouf loved cocktails and gave her free rein.

“Right in the middle of service I could say, ‘Try this.’ Or leave the bar and raid the walk-in for mint [for Mojitos and Caipirinhas]. A West Indian chef had a nonalcoholic ginger beer his grandmother made, and we were ‘Oh, homemade ingredient!’” Soon she was reimagining the classics.

Eventually Saunders was seduced by the sommelier route so many other women were exploring at the time. She took a gig, with a massive pay cut, as an apprentice sommelier at Windows on the World atop the World Trade Center but soon left to go back behind the bar, at the Tonic in Chelsea. After 9/11 the Tonic closed and she took a couple of months off, devastated by the loss of friends at Windows.

Meanwhile DeGroff was consulting with the Carlyle, the landmark five-star Upper East Side hotel that had just been bought by Rosewood and was looking to upgrade the bar and cocktails at
Bemelmans, famous for its murals and its clientele, which included the Kennedys.

“The food and beverage team wondered ‘Who’s the best man for the job?’ And he said: ‘A woman I know.’ ”

That woman turned out to have just the right touch, bringing back forgotten cocktails and inventing new ones. “The bar [staff] was all 50-, 60-, 70-year-olds who had been doing it forever. I could have been their daughter. I promised ‘If we put in a cocktail program we will fill this house, and you’ll see the results in tips.’ I worked closely with them, as if they were my dads.”

But she finally got the chance to do it all her way when she opened the Pegu Club, in 2005, in a second-floor space overlooking West Houston Street. Saunders named the bar for a cocktail, made with gin, that referenced an old-style British officers’ club in Burma. She insisted on fresh juice, specific glassware, a certain type of ice, bottled soda in place of a soda gun. She sought out esoteric gins and whiskeys. She tracked down artisanal cherries rather than jarred maraschinos, foraged for applejack and apricot liqueur, better bitters than the three types then available. (“Young bartenders take it for granted. They don’t know how hard it was to get it produced.”) Thanks to her, Chartreuse is back on the market.

Saunders expected her bartenders to be evangelicals. “Patrons would say ‘I don’t like gin’; the bartender would suggest a vodka infused with citrus and juniper and get ‘Oh, my God, that’s amazing.’ ” (Certainly that was my first reaction to one of her drinks, at Blackbird. Levels of flavor in a single glass? She was cooking with gin.)

The left side of the Pegu Club menu comprises the drinks everyone has come to expect, like Negronis; the right side changes every season. “And it’s not just my drinks; otherwise why work here? Bartenders are here because they want to learn.”

Indeed, Saunders became known as a generous mentor and the Pegu Club as a launching pad. “It’s like college—they graduate, go on to open their own places,” she says. “Now you can go to Kansas City and get a great cocktail, because of the way this caught on and branched out.” Or you can go to Jim Meehan’s PDT in the East Village, or any number of other establishments where the hands behind the bar are finishing carefully composed cocktails with bitters from an eyedropper.

At Pegu, her staff are doing more and more on their own now that Saunders lives three weeks each month in Seattle with her husband, Robert Hess, a former Microsoft executive who became known in the cocktail world for his blog, Drinkboy, an online mental watering hole that became a favorite of the likes of DeGroff, Gary Regan and David Wondrich before the cocktail culture was even a gleam in a shaker. He met Saunders when a friend brought him to Bemelmans, and their first date was a reconnaissance trip to Lupa to taste its Amari program. But Saunders couldn’t grasp how to maintain a relationship with both a Seattleite and a SoHo bar.

“I tried for so long to push Robert away, tried to hide feelings we were beyond friends. Then I went to L.A. to consult [on a bar] with [Campanile chef] Mark Peel and three weeks after I got out there I broke my ankle. I live in a walk-up, so I stepped back from Pegu and thought: Let [the staff] run it. Then I thought: I’m only two hours south of Seattle.” In July 2010 she and Hess were married, with a follow-up fete in New Orleans, at Tails of the Cocktail, the industry’s annual blowout.

When she’s out West, she Skypes with her staff a few times a week, so the shakers keep shaking even through natural disasters. After Sandy, the club went into overdrive with a benefit. Originally planned for a bartender with no health insurance who needs heart surgery, it became 50-50 for hurricane victims and raised $17,000 in one night.

“We had 23 bartenders, 23 drinks. There was one massive hangover on Monday, but it was super meaningful to watch people throw money” down for drinks.

Saunders is looking farther down the bar. She and Hess hope to open a sort of CIA, with “Cocktail” substituting for “Culinary” in the name, at his 10,000-square-foot house on 14 acres that will easily sleep eight.

“I see it as a Hogwarts type of place, a real think tank for the cocktail.”

She also fantasizes about cultivating an herb garden on the property, raising chickens, keeping bees and bats.

“My parents always said if you dream about a vision you’ve got to try.”

Or she can draw on Dale DeGroff’s advice: “Imagine you’re in a big black car on an open road; you’ve got nothing in front of you. Don’t look in the rear-view mirror. Just drive.”