Scholars of Suds: Beer Connoisseurship in the Classroom

Sam Merritt will train you to be a beer sommelier. 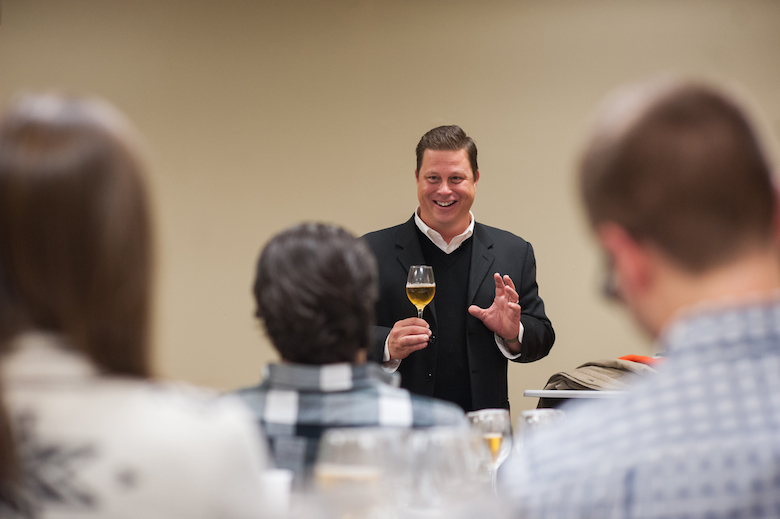 Now that Whole Foods fills growlers, Daniel Boulud owns a gastropub and the Wall Street Journal has declared beer sommeliers the next big thing, the idea of professional beer training probably seems like a no-brainer.

But back in 2006, when there weren’t many ways to formally study the drink, Sam Merritt took it upon himself to change that.

Merritt had just spent 10 years as the Manhattan sales rep for Brooklyn Brewery and their distribution arm, Craft Brewers Guild. Part of his job selling fancy beer to restaurants and bars all over the city was making sure the people who would be serving it knew their stuff. That meant afternoons training dozens of barkeeps at Blue Smoke or all 230 staffers at the Tavern on the Green how to tell when their draught tap lines needed cleaning (they’d get a whiff of bananas or cardboard, perhaps), how to pour a Belgian saison, or the difference between a lager and an ale (it all starts with the yeast).

At the time, Merritt did it because there was nobody else to do it—and like any good salesman, he saw a business opportunity: He left Brooklyn Brewery, hung out a shingle as an educator specializing in serving and selling suds, and Civilization of Beer was born.

It was a prescient move. Before long, beer menus appeared at every new modern American restaurant in Manhattan and a certification program called Cicerone was formed, named after an old English term for a guide. It was the first outfit to formally recognize levels of expertise in the beer-serving world, just like the ones for those who pour wine.

Just after the program launched in 2009, Merritt took the four-hour beer sommelier exam—essay questions, blind tastings and a three-minute live demonstration—becoming the 37th certified Cicerone in the country and the first in New York City.

He realized that others would pay to prepare for the test, and was soon one of the first in the country teaching to the Cicerone, holding all-day sessions for professional bartenders and other beer experts covering top-fermentation, excessive diacetyl production, or how to pick out the Perle hops in a porter from the IPA-friendly Cascades.

“We’re kind of like Kaplan for the SATs,” he says…except in his case, his classroom isn’t a windowless conference hall but the private barroom of a three-story pub in Times Square with pristine taps.

Yet crash courses are just a small piece of Merritt’s beer business. Today the 43-year-old’s biggest clients are national companies with vast sales forces, which fly Merritt in for daylong training sessions on everything from what the defect called “acetaldehyde” tastes like (green apples) to which beer in their portfolio goes with Italian sausage (if it has fennel seed, advises Merritt, try a malty Vienna lager).

Here in New York, those clients include some of the country’s biggest beer distributors (Union, Phoenix), most celebrated beer menus (the Blind Tiger, Rattle N Hum, Pony Bar, Waterfront Ale House, Spuyten Duyvil) and biggest breweries (Guinness, Heineken, Lagunitas). Merritt even goes back to Brooklyn Brewery once a year to train the newbies.

While Civilization of Beer generally charges by the day, lucky regular drinkers can listen to Merritt lecture for less at the Institute of Culinary Education, where for the past 10 years he’s taught amateur courses like a Beer 101 covering basic brewing styles, simple pairings and ever-changing trends.

Ironically—given his original goal of taking beer more seriously—those classes are now meant to convince new beer fans to be unafraid of the complicated suds scene, to take a sip rather than sweating over whether they’ve accurately described the spices in their Allagash White. “Don’t be a beer snob,” he told a recent class, “as much as a beer explorer.”

Well, we suppose there is such a thing as being a little too civilized.

Kegs of knowledge. Sam Merritt teaches bartenders and other beer experts the fine points of top-fermentation, excessive diacetyl production and how to pick out the Perle hops in a porter from IPA-friendly Cascades. Photo credit: Nancy Borowick.