This upstate whiskey captures the spirit of New York’s most fertile region. 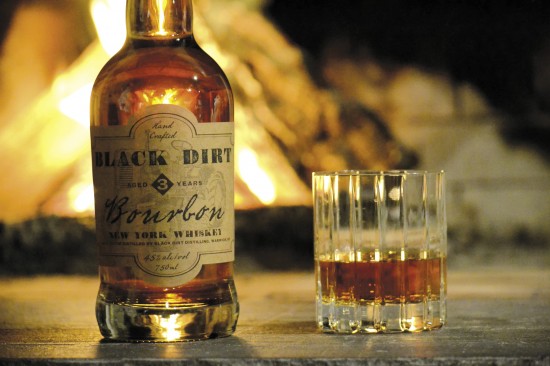 Nineteen years ago, up in the Hudson Valley’s famous orchard country, Warwick Valley Winery & Distillery was born when a fruit-growing family found themselves with a bumper crop of apples. In an effort to capture the perishable abundance, they experimented with hard cider and fruit eaux-de-vie. New Yorkers drank it up, and soon the family was as focused on fermentation as on farming.

Now the brand’s latest bottles—arguably their best yet—are named not for the trees but for the soil in which they grow.

The new label is called Black Dirt Distillery, a terroir reference to the dark, famously fertile soil left behind by receding glaciers 12,000 years ago. Today the “Black Dirt” region covers 22 square miles in Orange County and the soil—picture chocolate cake—is prized for the produce it yields.

But while black dirt is famed for growing onions, any Greenmarket shopper can tell you it’s also particularly kind to corn. Which got the folks at Warwick Winery and Distillery thinking about a whole new spirit: bourbon.

Warwick had received a license to distill fruit in 2002, but each winter, after the frenzy of the post-season distillation of fruit eaux-de-vie and apple brandy, its stills tended to lie idle. When their license changed to permit a broader range of products, whiskey was suddenly a possibility.

They christened their new spirit Black Dirt Bourbon and the first run was a runaway hit. Three hundred cases, or about 1,800 bottles, sold out in a scant five weeks, mostly to Manhattan bars and retailers.

The next batch won’t be released until March, but I got to sneak a sip last fall at the first-ever “Spirits of New York” tasting hosted by Slow Food NYC. Although their new Rustic American Dry Warwick Gin was the showcase product, I couldn’t help but ask: Got any bourbon?

“I have some in my car,” confided Jeremy Kidde, co-owner of Black Dirt and Warwick Valley Winery & Distillery (two separate entities, although they share facilities). Rather than promote a product that was temporarily unavailable, a rare bottle of the whiskey was secreted away for the evening. But 10 minutes later I was happily clutching my plastic cup of Black Dirt contraband and found I was reluctant to put it down.

It’s easy to see why the stuff sold out so quickly: Made with a mashbill of 80 percent corn—grown in the black dirt, of course—12 percent malted barley and 8 percent rye, and aged for three years in charred oak barrels, the result is a dry, almost chocolaty whiskey with loads of local character.

The way-too-limited-edition problem won’t be an issue this time, Kidde told me later. Warwick is in the process of building a second stand-alone distillery to increase production. A second, 100-proof bourbon is on the way; a rye and single malt American whiskey also have been discussed.

But the born-of-apples business isn’t planning to stray too far from the tree, even under the Black Dirt label. The next release, which should be out by the time you’re reading this, is a four-year-old Black Dirt Applejack.

“We wanted to make a darker spirit that has more whiskey character but still maintains our apple brandy roots,” Kidde explains. Although regulations permit producers to create applejack by mixing apple brandy with neutral grain spirits, Warwick’s will be 100 percent apple brandy, distilled from local Jonagold apples and aged in charred oak barrels, the same used for aging bourbon.

“As it smoothes out over the years, you almost get more apple on your palate,” says Kidde, “because the rougher alcohol flavors have dissipated. While other products lose their fruit, this is actually gaining fruit over time, as well as oak characteristics: toasted oak, vanilla, a little spice.”

Apple, vanilla and spice? Sounds like a fine recipe for apple pie, I respond.