In these pages, we examine ideas that were barely a glimmer back when organic mesclun and fingerling potatoes were breaking news. 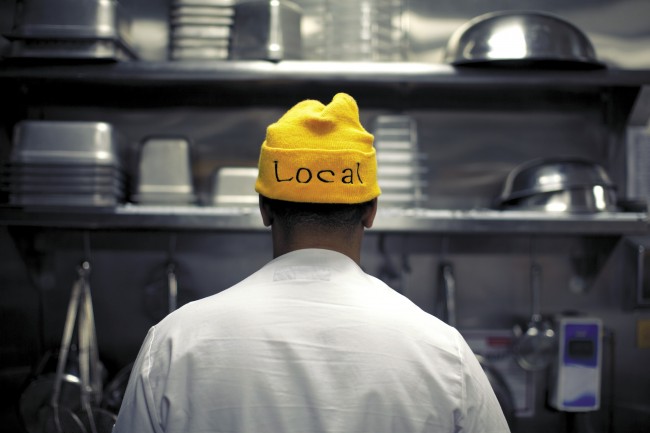 When I was 22 and working at Fortune magazine, I spent far too many hours over PowerPoint and Excel and ate far too many meals out of Ritz-Carlton minibars. But there were a few perks to having a corporate AmEx during the economic boom, and one of my favorite things to schedule in my Palm Pilot was working lunch at Judson Grill. I didn’t yet know chef Bill Telepan’s name, but found the fresh American fare he cooked there far more interesting than anything my boss discussed over it. (Little did I know I would go on to meet, and marry, one of the farmers whose beef and pork Bill was buying, but that’s another story.)

Bill’s been a hardcore locavore since long before I met his menu, but the passing years have brought him increasingly good ingredients — and good company. Which is why this “Eat Drink Local” issue was so much fun to edit.

In these pages, we examine ideas that were barely a glimmer back when organic mesclun and fingerling potatoes were breaking news. You’ll read about a hybrid grape that’s taken root upstate, drawing comparisons to rustic Rhône blends, even Barolo. About a start-up that connects grassfed beef farmers to city chefs through a small slaughterhouse that’s better for both animals and eaters. About the cocktail list at Rouge Tomate where to-your-health drinks feature fresh vegetables and feel more virtuous than vitamins. And about the country’s first “restaurant-supported fishery,” which delivers spectacularly fresh Long Island seafood to chefs like April Bloomfield, Dan Barber and Eric Ripert. In a return to the time when supply trumped demand, they happily accept whatever’s biting, be it skate or squid.

But the good food movement isn’t limited to fine dining and yields much more than great flavor. To wit, we visit two rooftop gardens: one at an East Village elementary where children study everything from history to math by growing carrots and kale, and another atop a homeless shelter on the Bowery, where residents nourish vegetable plants, and vice versa.

Local food has come a long way in the 15 years since I ate on the clock at Judson, and while my upscale lunch spot is long gone, Bill’s been very busy — ever “inspired by ingredients,” to quote his apt cookbook title. I’ve eaten well at his farm-forward eponymous place on the Upper West Side and was thrilled last month to break bread at what’s sure to become my new favorite place for a midday meal: his casual Telepan Local in TriBeCa, a relaxed restaurant whose name, writer Regina Schrambling rightly notes, is redundant. See you there.