Eating with Clio – The First Meals by Breast and by Bottle, and the Mysterious Food-Allergy Rash 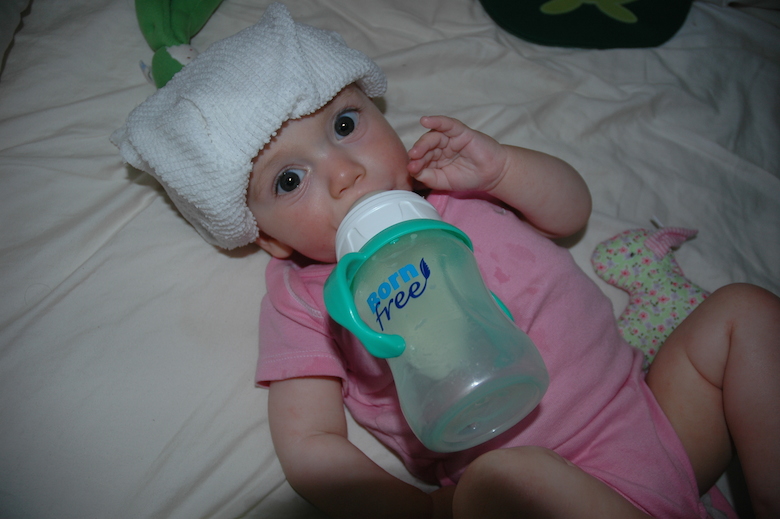 To start from the very beginning of Eating with Clio, Clio ate breastmilk, as most newborns do.

Still, breastfeeding rates are actually up worldwide, and at all-time highs in America, where, according to the Centers for Disease Control and Prevention, three-quarters of women breast-feed their babies for at least some period of time.

And for good reason. The better-living-through-chemistry mentality of Mad Men-era formula proponents has been supplanted by universal recognition that breastfeeding for 6 months or a year or longer is just great for the growing child. Breastfed babies have an edge in terms of intelligence, as well as emotional and physical development. Which is not even to mention the benefits that moms reap-from post-pregnancy weight loss to emotional bond with the baby to reduced risk of certain future cancers.

But nowadays breastmilk isn’t always direct from the source, and neither was Clio’s. Her breastmilk sometimes came from a bottle filled with milk her mother had pumped earlier and stored in the refrigerator or freezer. (Look for future posts on the logistics of breastmilk supply management,  how we felt about milk pumped after substantial alcohol drinking, and even some homemade baby formula recipes from the Weston Price Foundation that friends swore by when they ran out of pumped milk.)

Pumping is, of course, in vogue and very practical. Armed with her Pump In Style backpack, my wife only needed an electrical outlet and some privacy to prepare Clio’s next meal. She developed a list of favorite pumping spots: Despite it’s ultrahipster setting my wife found the lobby bathroom at the Ace Hotel to be one of the safer bets for pumping in peace. (How about you?)

Beyond affording mom a more flexible daily routine, pumping also allows other people to feed the baby, whether it’s a grandparent, a babysitter or even–in a very modern twist–Dad. The sustenance bond once reserved primarily for mother and baby now included me too, and inspired one of those recurring parental epiphanies: you do sustain this child. That is, if I weren’t holding this infant’s bottle in its mouth, it would have nothing to eat, it would go hungry and it would perish. The thought still chokes me up with nostalgia.

So all was well in paradise. Clio was a good feeder, whether from the breast or from the bottle.

And then, all of a sudden, the two-month-old Clio, her skin perfect and smooth, developed a red, bumpy rash over her face and neck and the backs of her elbows and knees. It sometimes caused her to itch fiercely, but mostly it just looked bad. We tried moisturizers and salves and bath oils, but the rash persisted, mysteriously waning for a couple of days and then returning with a vengeance.

After consulting doctors and other parents, we learned that such rashes in newborns and toddlers are often tied to what they eat. Of course, we knew what she was eating–breastmilk. But not all breastmilk is created equal, since breastmilk is a sort of baby-nourishing translation of what the mother herself is eating. And so began a months-long process to determine what it might be in my wife’s diet that was giving Clio her rash. (We eventually figured it out, but to find out what it was, you’ll have to read Eating with Clio part three next week.)