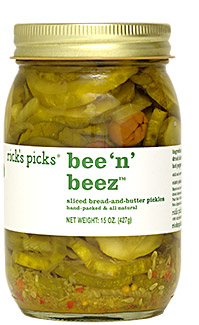 Last night we ran into Rick Field of Rick’s Picks–always a pleasure to run into a pickler, right?–and he gave us the scoop on the “one-time only pickle”  he’s making for the special, second-annual heirloom produce auction at Sotheby’s. The event next Tuesday night is a fundraiser for New York City Greenmarkets, where Field can often be seen selling. Tonight he’s taking over the kitchen to prepare for his auction item at Great Performances catering company, another sponsor of the event (and also another Greenmarket seller, where they hawk their own fantastic “Thunder” pickles grown on their own Katchkie Farm).

Field is planning to create what he calls a “cross-pollination” between a traditional Italian giardiniera and a classic American bread-n-butter, such as the bee ‘n’ beez shown at left. He’s going to brine Greenmarket Kirby cucumbers, sweet red bell peppers, carrots, and onions with cider vinegar, toasted cardamom seeds, fennel seeds and lemon thyme. May the briny bidding begin.