The labs perched on the rooftops of some Manhattan schools are teeming with life — and not just that of fifth graders. 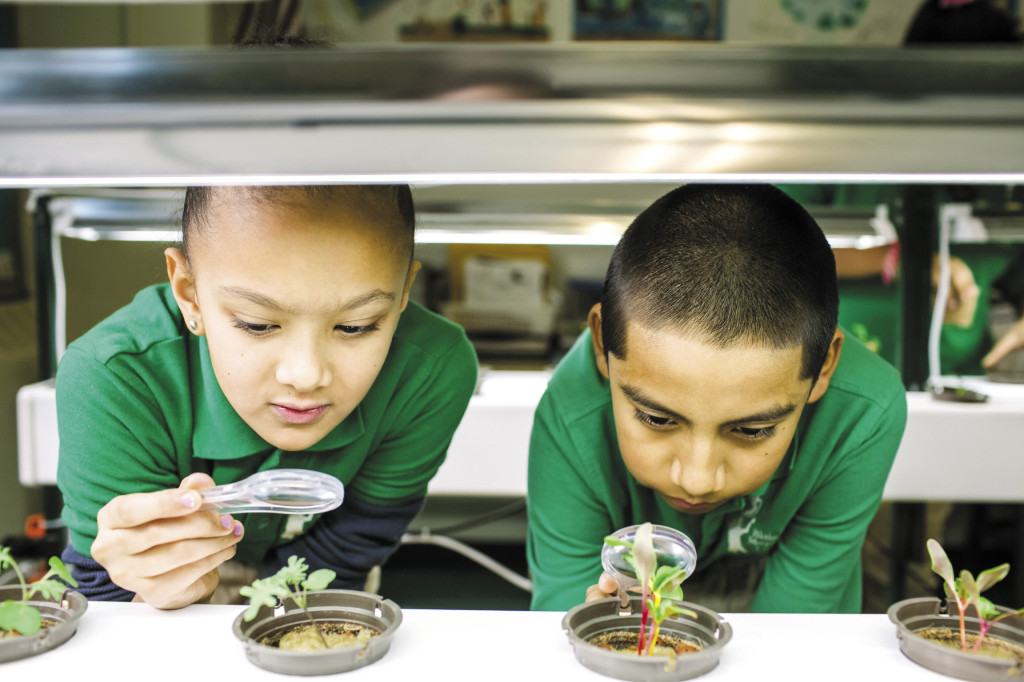 The science laboratory perched on the rooftop of the Manhattan School for Children on West 93rd Street is teeming with life — and not just that of fifth graders. Tomato plants curl toward the ceiling, ladybugs hunt aphids on the bok choy and a gurgling tank in the center of the room swirls with tilapia.

The living lab is part of the Greenhouse Project, a campaign started by nonprofit NY Sun Works, which plans to place 100 hydroponic labs in our city’s schools by 2020.

As the term suggests, hydroponic growing is rooted in water — in the soilless system, plants float above pools or pipes. These classroom labs were inspired by an earlier NY Sun Works project that itself floated over water: the Science Barge, a buoyant model of innovative urban agriculture, using zero chemicals, producing zero emissions and zero runoff, all taking up zero real estate in New York City’s overcrowded grid. 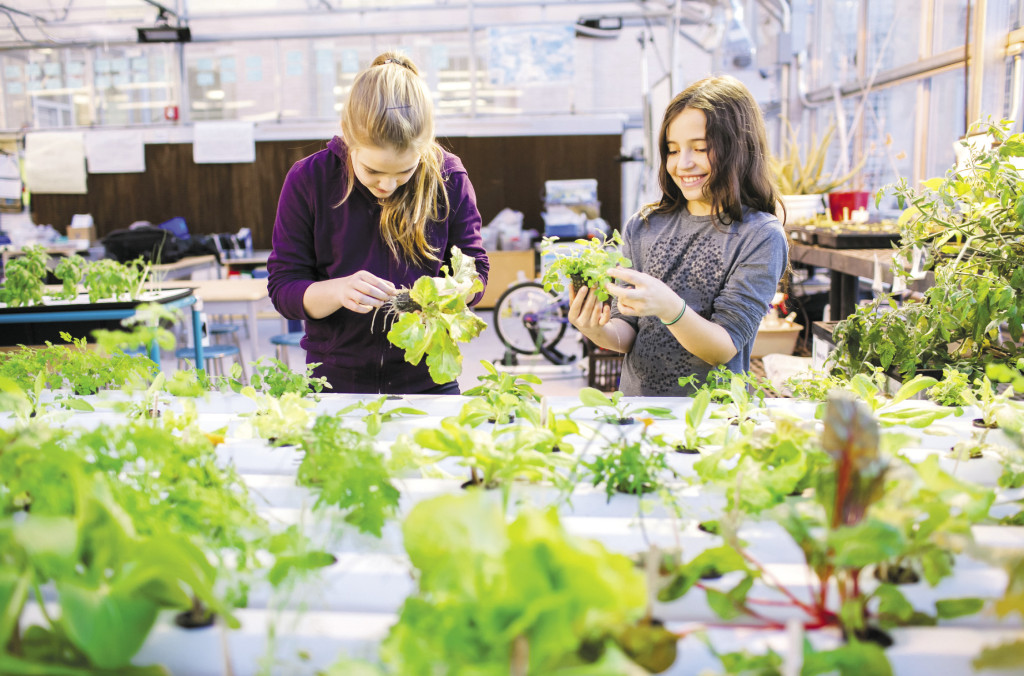 Scores of schools visited the barge, but NY Sun Works directors Sidsel Robards and Manuela Zamora decided to bring hydroponic technology to the students; today they have more than 30 science lab projects in various stages of development at city schools across Manhattan and Brooklyn, as well as a “Science Barge 2.0” at the Harbor School on Governor’s Island. Their team services start with fund-raising and construction and end with training for teachers and even school custodians, who have an important role to play in lab upkeep.

The greenhouse’s appeal is alluring enough to make anyone covet fifth grade. Even on chilly days, it’s peel-off-your-sweater weather here, and instead of long lab tables and cabinets full of microscopes and textbooks, each child is assigned a seedling, carefully labeled with his or her name. Nutrients are added to the water, hypotheses are formed and tested, and at the end of the course, students get to eat their work.

NY Sun Works requires one full-time teacher dedicated to each lab they help build, but to expand their impact beyond schools with labs, they’ve also developed a teacher training program and curriculum that can be used in almost any school. So far, nearly 100 teachers have completed their training, creating a small army of educators versed in hydroponics and dedicated to environmental education. 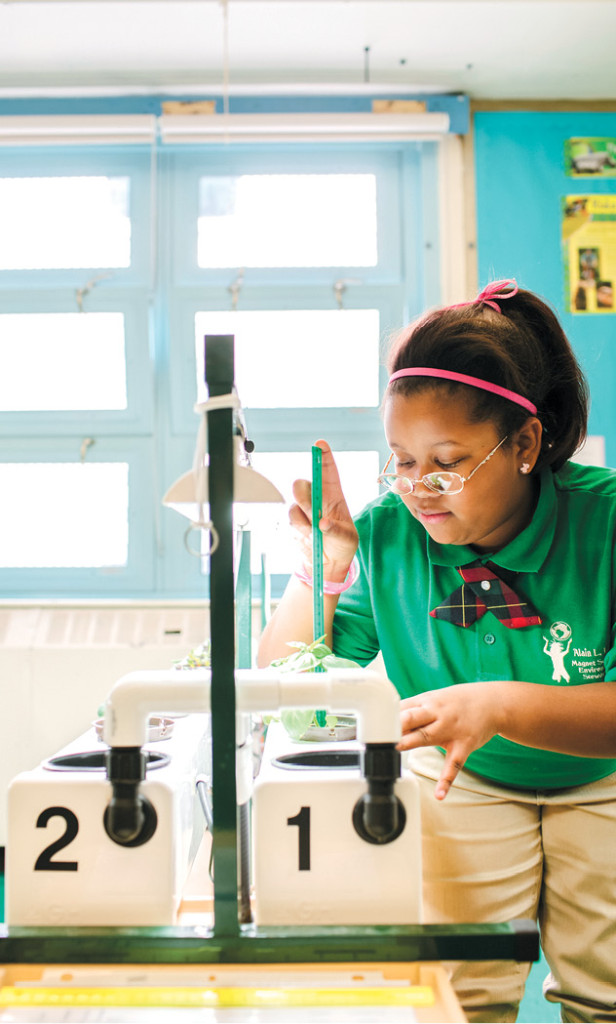 Robards and Zamora say the hydroponic growing system allows for experimentation inside a highly controlled environment. With animals, vegetables and minerals all in play, the labs don’t just supplement science curriculum — they are the science curriculum. Students run trials, concocting, for example, pest control sprays composed of ground-up nasturtiums (an impractical solution, it turns out) or olive oil and garlic (effective!). Engaging students is never an issue.

“Earlier I heard a girl over by the fish tank say, ‘Oh, my God, the pH level was nine yesterday and now it is six!’” Robards says. “At one point, fish were dying, and everyone was talking about ammonia levels, what’s in the tap water and how to fix it. It all becomes more important to them.” 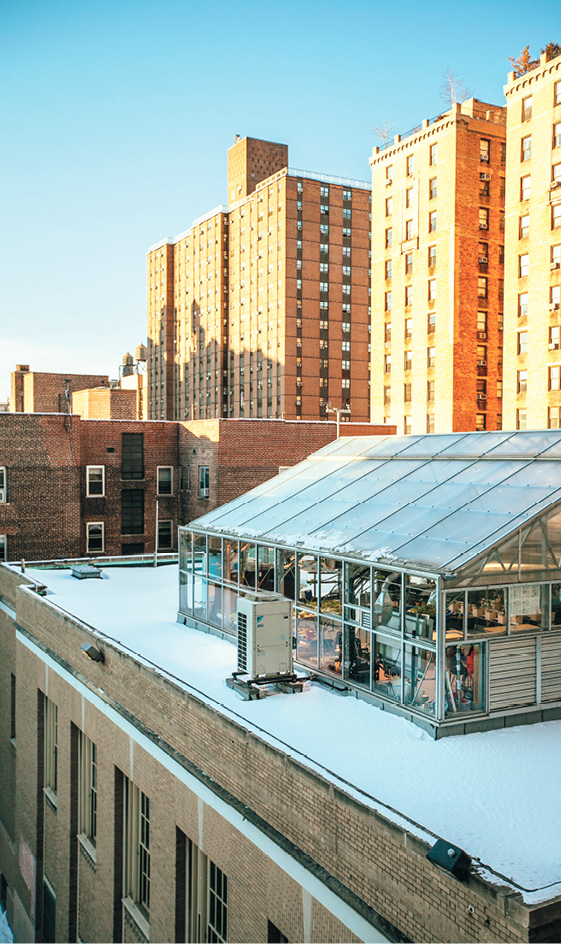 Sometimes the labs are built in existing classrooms retrofitted with hydroponic equipment. In the case of the Manhattan School for Children, there “wasn’t a broom closet space to spare,” so parents and teachers turned to the roof, working with NY Sun Works to raise roughly $850,000 for the greenhouse. Robards says traditional science labs can run up to $1 million to build, and that doesn’t include any ladybugs. 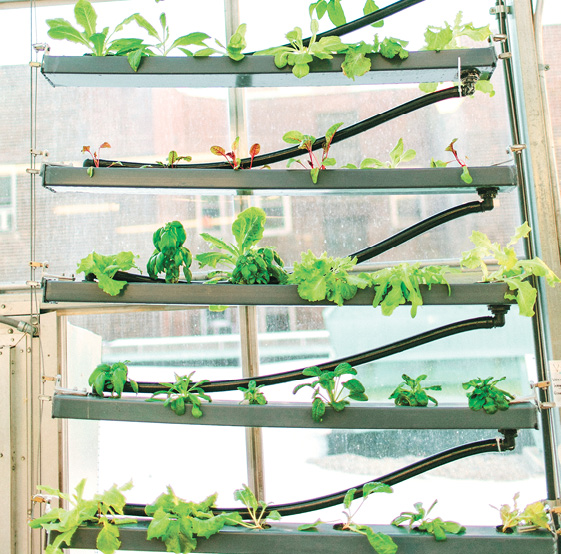 The seed that students choose on day one will determine the plant they take home to eat at week nine. While some schools donate their lab-grown produce (what to do with the fish is still a subject of debate) or host classroom salad parties or tastings, Wong likes to let her students share their harvest — and the nutrition lesson they receive in class — with their families.

“I wouldn’t say students start making better food decisions [as a result of the class], but it brings that awareness of nutrition to light as they get older,” Wong says. “It helps plant that seed — no pun intended — so they will be well equipped later in life.” 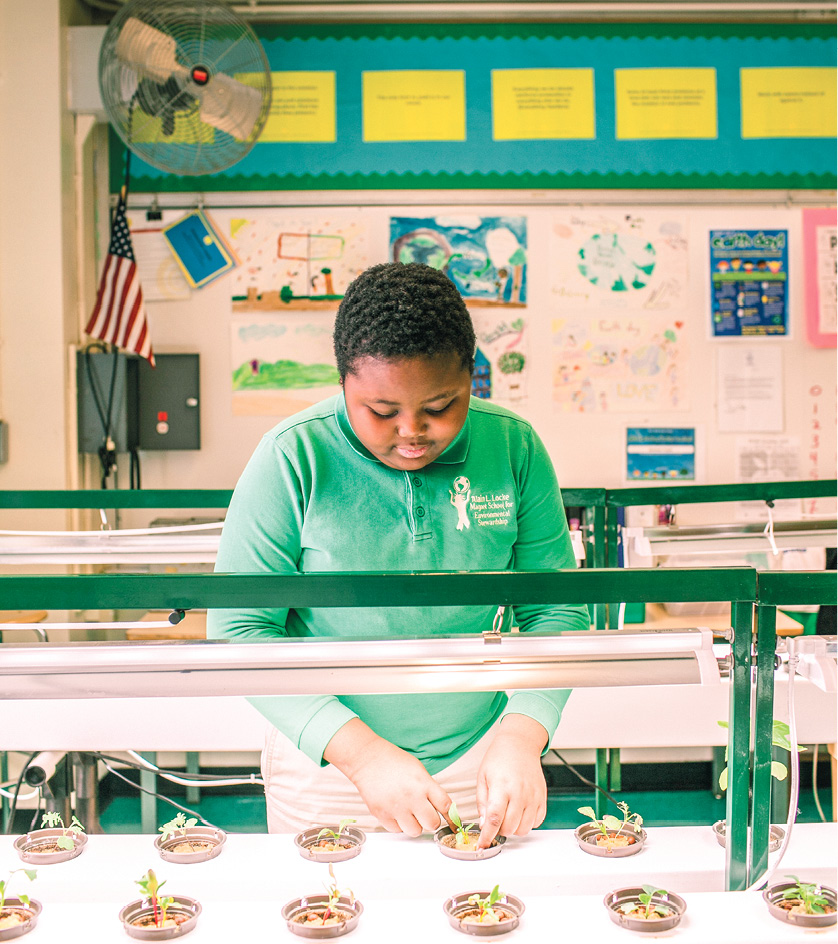 Life sciences. Instead of microscopes and beakers, each child is assigned a seedling, and at the end of the course students get to eat their work.

Making the micro macro is all part of the plan: The tilapia tank is also a lesson about global fish farming, and the rainwater capture system is a study in conservation. In Wong’s favorite lesson, she teaches the children about oxygen, carbon dioxide and the delicate but crucial ways one form of life can support another.

By the time NY Sun Works is done, students across New York City will be eating — and breathing — science.

“Watching them breathe into the plants is the cutest thing you have ever seen,” she says. “I think when they do that, they understand the communal element—this is the environment, this is their planet.” 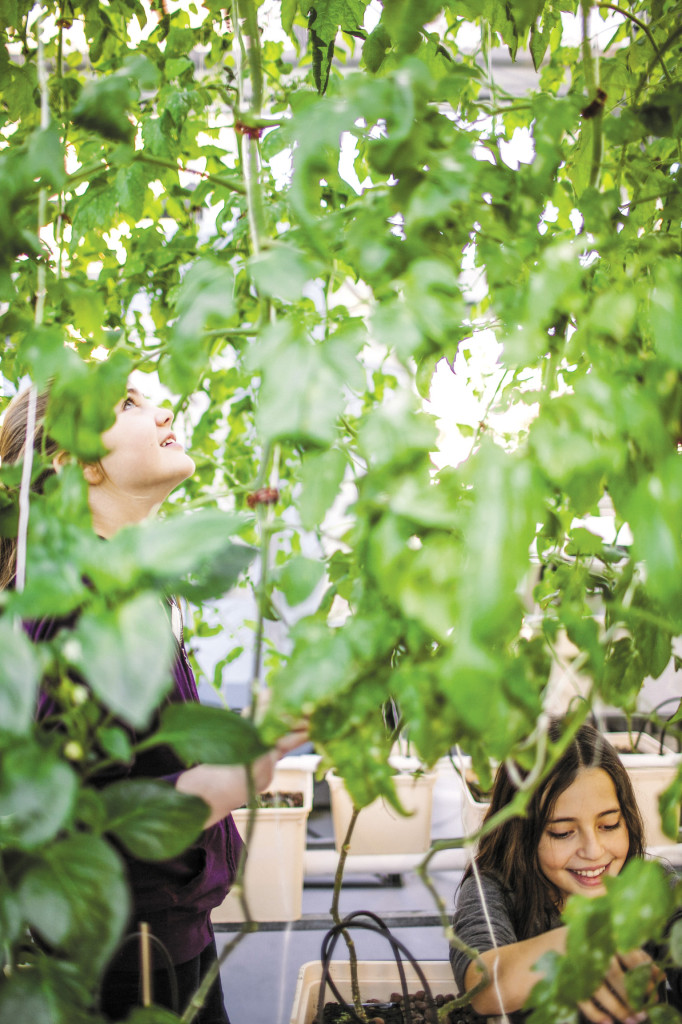