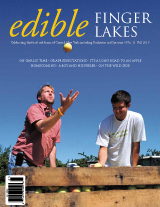 A recent blog post by the The Democrat and Chronicle, a newspaper in Rochester, N.Y., pokes a teeny bit of fun at the cover from our September/October issue, shown above. The photo is of boxes of Red Jacket apples headed to farm stands literally all over our fair city from their home in Geneva, which is indeed much closer to their foodshed than ours. It was the same farm’s position on the cover of Edible Finger Lakes, shown above left, also near their foodshed, that got them to talking. In fact both photos are from a series taken by Edible Communities founder and photographer Carole Topalian, who actually resides on the left coast. (To make this post even more meta, Carole was actually here in Brooklyn all weekend, shooting for the future Edible Brooklyn Cookbook.)

As the newspaper says: “These magazines focus on locally produced foods, often looking at the orchards and farms where foodstuffs grow. New York City, with precious few farms in close proximity, has a slightly different take on what constitutes ‘local.'” And it’s true: Until city rooftops, community gardens and urban growing centers like Added Value, East New York Farms and Brooklyn Grange are producing enough apples to feed our multitudes — believe you me, we have hopes they could, at least in part — we will have to get our apples from places that could be 100-plus miles away. But once they get here, we turn them into totally amazing local products like pie on our current cover shown above right, made by Gramercy Tavern.