At the corner of Clarkson and Chocolate.

At the corner of Clarkson and Chocolate. 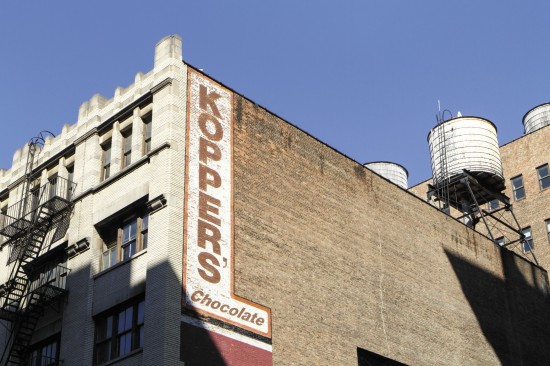 TRIBECA—For candy fiends, the word dragées—the French term for confections that have been (quite literally) “dragged” through a chocolate or sugar coating—conjures up a host of competing assumptions.

It might bring to mind the little discs of gold and silver, tightly wrapped in white tulle, that serve as party favors at many weddings. Or the reliable glass jar of Jordan almonds on a grandmother’s sideboard, or the tempting silver ball bearings on a fancy Christmas cookie. It might even, if you know your candy terminology, bring to mind the familiar brown bag of M&M’S.

But it most likely does not bring to mind a hot cinnamon-flavored malted milk ball, a Tiffany blue chocolate lentil or an almond dipped to perfectly resemble a pimento-stuffed cocktail olive. These are all among the candies on offer at Koppers Chocolates, a factory that has been turning out delectable chocolate in Greenwich Village for 75 years, and which boasts the largest variety of dragées—450 and counting—in the world. 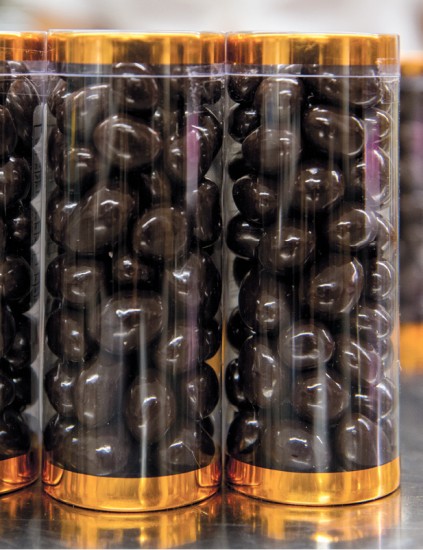 The turn-of-the-century brick factory on Clarkson Street is identifiable only from the corner of Hudson Street, where you can glimpse the words “Koppers’ Chocolate” still painted on the building’s eastern wall. The casual pedestrian might assume that the sign is from another era, surrounded as it is now by offices, condos and upscale restaurants, but that would be a mistake: Koppers (the apostrophe was cast off decades ago) is very much open for business, with customers around the globe.

Koppers’s beginnings offers a clue to its remarkable staying power. As co-owner Jeff Alexander explains, his maternal grandfather, Fred Stern, started the business in Greenwich Village. The year was 1937, and Stern and his family—including Jeff’s mother, Lorie—had just fled Nazi Germany for New York City—just two years before World War II was declared. It is a harrowing history but Jeff and his sister Leslye prefer to focus on their grandfather’s American enterprise, which Stern, who had been a textile manufacturer in Germany with no prior experience in confections, opened on Waverly Place. The young company was named for Stern’s original partner, a Dutchman who soon left the business to the Stern family. 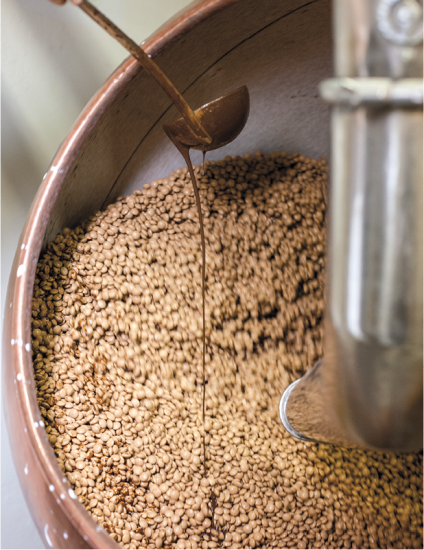 “The vision, from the beginning, was to marry European chocolate technique with an American sensibility,” Jeff Alexander explains. Stern experimented with filled and molded chocolates as well as cordials, but it was his son-in-law, Harold Alexander, father to Jeff and Leslye, who saw that the future of Koppers was in dragées: the shiniest, most perfectly formed, boldly flavored ones possible.

“Dad thought there was a vacuum,” Jeff says of his late father’s passion for panned chocolates, “an opportunity to do one thing and to be the best in the world at it.” Their second location, a five-story former seed-processing plant on Clarkson Street, would serve as both laboratory and factory for this delicious dream.

The sheer quantity of the family’s inventions can overwhelm even the most dedicated chocolate enthusiast, but there are some classic firsts in the Koppers catalog. According to Jeff Alexander, his family was the first to market chocolate-covered espresso beans “more than 40 years ago—they took a while to catch on,” and he claims the chocolate-covered gummy bear hails from Greenwich Village, too. 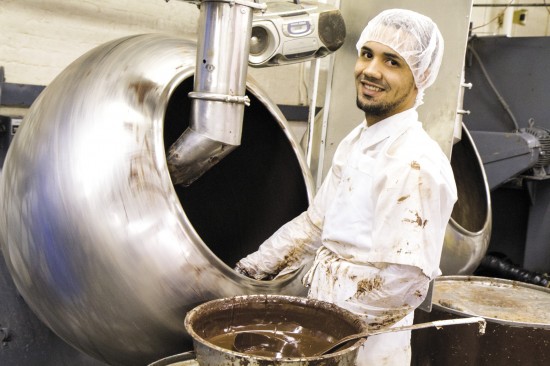 “Anyone can cover a bear in chocolate these days, but it’s another matter entirely to get a cute and small bear that keeps its definition.”

Not all creations succeed, however: Jeff speaks wistfully of an experimental cordial with a habanero pepper–flavored center: “We made it nearly 30 years ago, but it was too ahead of its time,” he says, and then his face lights up with mischief. “It was the greatest, though…we should do it again!” Until they do, heat-seekers will have to make do with Koppers’s cayenne pepper savories and Mayan cayenne almonds.

While Koppers recipes are proprietary, the Alexanders are happy to show me how their dragées are made. Opening the hand-cranked elevator to a space perfumed with cocoa, Jeff points to a gleaming row of enormous copper drums. These, despite their cylindrical shape, are the pans, where chocolate is applied to everything from buttercrunch to miniature mochi as well as 40 different flavors of nonalcoholic cordials. Tumbling in the pans, the chocolate-coated treats dry to a glossy finish that catches the light like polished marble.

“What we do is a lot like baking,” Jeff says, pointing to the chocolatiers who stand at attention by each pan, holding a mixing bowl of tempered chocolate. “Chocolate making is reactive—changes in the weather and in raw ingredients can affect a recipe. You need a chocolatier to be on hand at all times—seeing, smelling, tasting throughout the process.”

Candy coating (found on a Koppers “milky,” which predates the M&M candy) is applied in copper pans as well, as is cocoa, cinnamon and food-grade color, in “every shade in the Pantone wheel,” Jeff smiles. This means that a taste for espresso beans in New York Taxi (yellow and white) can be gratified, as well as kosher confections, and chocolate lentils in colors for Halloween, Christmas, Hanukkah, Easter and even the Brazilian flag (a custom order). All are weighed and packed into cellophane bags on site, for shipment to customers: Koppers business is entirely wholesale, and made-to-order.

That is not to say that you won’t find their dragées on the streets of New York: Zabar’s,
Citarella, Dean & Deluca, Bloomingdale’s, Economy Candy and Oren’s Daily Roast are among their more than 40 wholesale customers in New York City alone. The Alexander family doesn’t mind if Dean & Deluca repackages their pumpkin spice malt balls or if Bloomingdale’s advertises a proprietary mix of chocolate almonds. 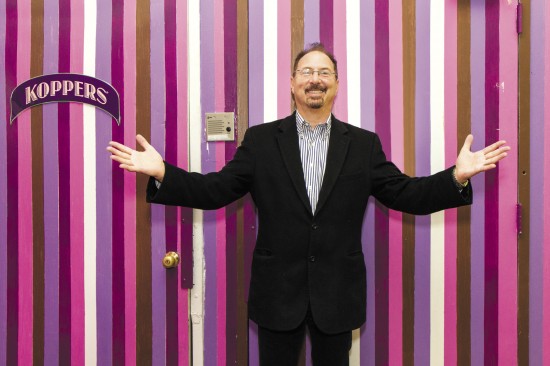 It would be hard for a competitor to keep up, anyway: Lorie, Jeff and Leslye, the three principals of Koppers, are constantly devising and testing new flavors and ingredient combinations.

“It’s all intuitive,” Jeff says, describing how the trio can take a flavor from idea to execution in a single day, using their factory as a test kitchen for their brainstorming. “We had tiramisu at a restaurant one night and decided to re-create it as a dragée,” he offers by way of example, explaining that in the absence of ladyfingers, marscapone and whipped cream, they used “coffee, amaretto, dark and white chocolate” to mimic the flavors of the classic Italian parfait, dusting the result with a cocoa powder finish.

The Alexanders are well aware that this is not how most chocolatiers devise new products. Jeff, who trained as a lawyer and worked at Universal Pictures before joining the family business, particularly relishes the freedom that Koppers affords.

“We don’t have focus groups or marketing teams. Instead we have our cumulative experience, and relationships with our ingredient suppliers that go back more than 70 years—and we just know when an idea really works,” he says.

This doesn’t mean, however, that they don’t conduct taste tests: “Sometimes I’ll bring a new product downstairs and just ask people walking down Clarkson Street if they’ll give it a try and tell me what they think.” Whiskey cordials and Greek yogurt–covered caramels on the morning commute? Don’t mind if I do, thanks!

Jeff and Leslye Alexander would like to expand their operations, or perhaps open a pop-up retail space in their building to capture the fashionable foot traffic coming from Hudson Street. But relocation from the five boroughs seems as unfathomable to them as it did to their grandfather—although he could never have guessed that their Clarkson Street space, one of so few functioning factories left in Greenwich Village, would become both a real estate goldmine and rarity. Not content to be a museum to the past, the Alexanders continue to innovate, and, like the best New Yorkers, to make the most of their limited space.

“It’s just what we do,” Jeff Alexander says, shrugging.

It’s also who they are. As Scott Goldshine, Zabar’s general manager, explains: “I’ve been at Zabar’s for 36 years, and we’ve been selling Koppers longer than that! The product is fantastic, but they are also a wonderful family. When I started, I was the garbage man, but Harold Alexander always treated me like the owner of the store.”