A Sparkling Mead Maker Takes a Bite Out of the Apple 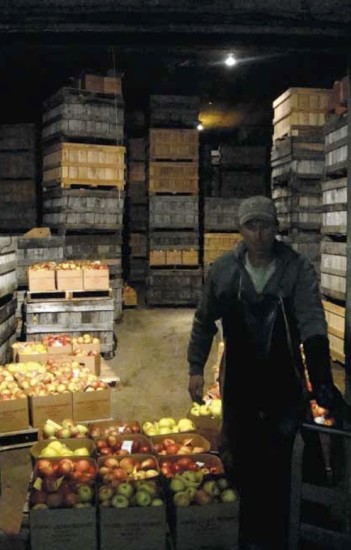 Raphael Lyon did not grow up in a family of winemakers or fascinated by stories of Champagne’s storied heroine, the Widow Clicquot, and her ingenuity with bubbly. Rather, Lyon’s love of transforming apples and honey into sparkling mead came from somewhere far less romantic.

“I was really into DIY,” says the unlikely Brooklyn-based vintner. “I took my bicycle apart and put it back together because I was interested in the process. A friend of mine had a really big stainless steel tank and he was making some backyard hard cider, and I was like, ‘Oh, wow, I can make free booze!’ So that’s when the light bulb went on.”

A decade later, Lyon’s interest in fermentation has gone far beyond mere dabbling in do-it-yourself hooch. Under the name Enlightenment Wines, he now makes 250 cases annually on his family’s farm just outside of New Paltz—“in Clintondale, which no one knows because it’s, like, the size of a P.O. box.”

He begins by crushing a mix of up to five varieties of organic apples that a local farmer sets aside for him—lately he favors Fuji. “When you’re tasting an apple for wine, you’re looking for different stuff—there are a lot of apples that I like to eat that don’t make good wine.” He blends the fresh juice with raw honeys, adds yeast to kick off the fermentation process (“the yeast strain is really important; there are only a few that give that clean, clear result so the more subtle aspects can come through”), and ferments it in small casks at around 50 degrees for up to six months.

After bottling the booze he adds a little sugar to kick off the secondary, in-bottle fermentation that brings on the bubbles. He doesn’t filter the elixir, add sulfites or ditch the lees (expended yeast cells that sink to the bottom of the bottle), because he likes the biscuity effect they have on the mead’s aroma.

The result is a gorgeously dry, incredibly subtle sparkler that’s now poured at Jimmy’s No. 43 in the East Village and sold at notable wine shops like Chambers Street Wines and Frankly Wines in Tribeca, and many more across the East River. Sticking to his DIY roots, he designs and silk-screens the ornate labels himself, and gives his wines kooky Dungeons-and-Dragons-ish names like Last Gift of My Daemon Lover, Cuvee Anguis Singularum and Wild Melaides.

While Lyon is pleased his mead is on offer at respected drink dens, he’s most committed to growing his quarterly delivered CSA model (that’s “community-supported alcohol,” friends), shares of which sold out within days of his launch, and otherwise inspiring drinkers to “just be a part of the conversation about food.” He’s considering inviting members up to the farm to do things like pick dandelions for experimental batches of the weed-sourced beverage, which he’s obsessed with bringing back into vogue. “I want to make things that are challenging and really be an artist about it. I’m trying to break every rule and see if I can still win the game.”