RECIPE: An Afghani Feast for the Whole Family From Mark Kurlansky’s International Night

By committing to recipes for everything from sea urchins to Mongolian tea, father and daughter duo Mark and Talia Kurlansky affirm that traditional recipes don’t have to be simplified or sacrificed for younger palates. 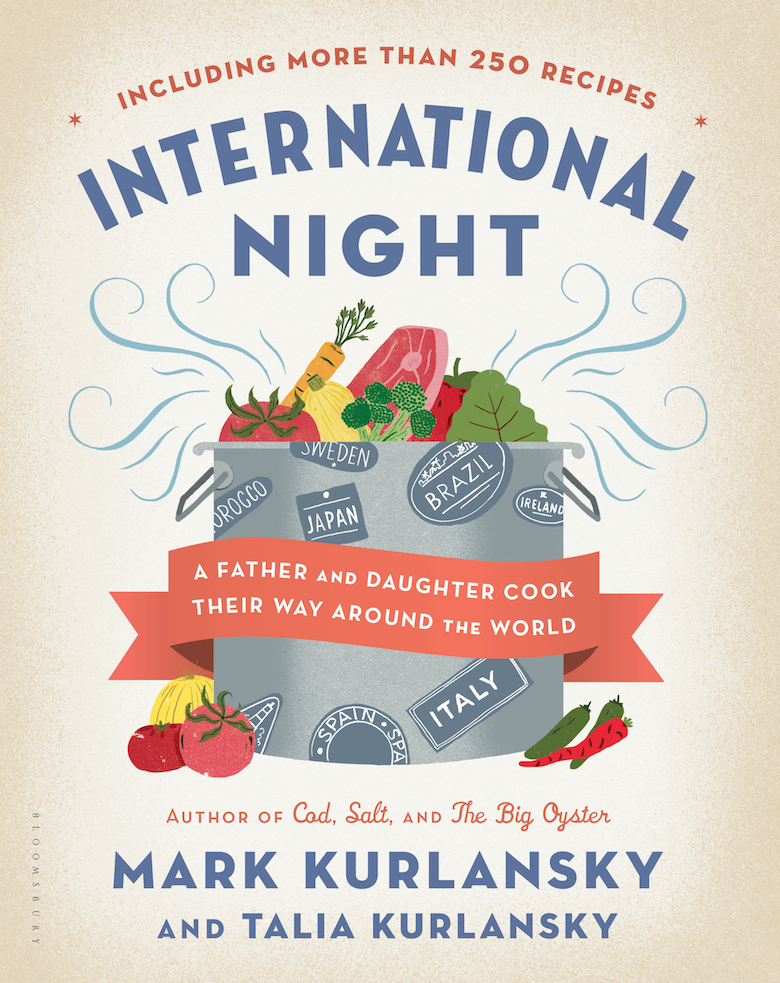 Kurlansky co-authored the cookbook with his daughter, Talia.

The rush for publishers to get cookbooks into gift guides before the holidays spoils me this time of year. For over a month now, I’ve received one delicious read after another, all with some tie to New York City. Each one deserves the spotlight, so starting today, I’m sharing one a week to take us right up to Thanksgiving. I don’t want to assault you with shopping lists already, but I do think that you will enjoy the best of locally-relevant reads and recipes as much as I have.

First up is New Yorker Mark Kurlansky’s International Night: A Father and Daughter Cook Their Way Around the World. For this book, Kurlansky — author of The Big Oyster, Cod, Salt and other food-inspired reads — teamed up with his daughter, Talia, to share a family ritual: once a week, they spin a globe, and wherever Talia’s finger lands, they prepare a meal inspired by that place. Fifty two weeks in, they had enough multi-course meals for every week of the year (as well as an entire book, apparently).

The book is organized by the order in which Talia landed on a given location with Philippines night first, Emilia Romagna night last. Each night includes a menu of multiple courses generally determined by the customs of the given country or region. For example, Japan night includes dishes for each of the seven courses of a traditional meal (appetizer, soup, sashimi or sushi, broiled or grilled food, a stew or something cooked in a pot, fried food and dessert). Not all menus are this drawn out, but at the very minimum, each usually includes recipes for an appetizer, a main course, a dessert and a drink.

The Kurlanskys’ cookbook engages the entire family in the kitchen. By committing to recipes for everything from sea urchins to Mongolian tea, it affirms that traditional dishes don’t have to be simplified or sacrificed for younger palates. Involving kids in the process of crafting a multi-course meal by giving them some form responsibility can incentivize a surprising amount of their interest and commitment. At the same time, the book illustrates that meals cooked together can also push the boundaries of parents’ more seasoned tastes. Yes, over Andalusian sea bream, flan (one of Talia’s all-time favorite desserts) and sangria (non-alchoholic recipe included for younger ones), the Kurlanskys vie that everyone can actually win at dinnertime if given some power over what’s on the table.

International Night also realizes food’s educational potential; do you know any traditional meals from French Guiana off the top of your head? Right, me neither. If you follow the book though, Kurlansky has done much of the work for you by determining mostly achievable dishes (not everyone can grocery shop in New York City) that faithfully represent the landscape and culture of a given country or region. Mixed with these recipes are short essays and notes that give dishes some societal context, although (and I imagine the authors hope this, too) they should only be a jumping board for delving further; the fact that the recipe for Gâteau Bretonne also appears under its Celtic name (kouign-amann) should prompt questions about the history of the French region of Brittany in addition to yielding a buttery cake.

It wouldn’t make sense to organize the book’s global scale by seasonality, but a menu that I found appropriate for mid-October in New York was the one for Afghanistan night. Heavy on eggplant, plain yogurt, fresh mint and a variety of spices, you can still find most of these ingredients at the farmers market:

Purée chickpeas in a food processor with the onion. Mix in the ground lamb. Add salt, pepper, cinnamon, bread crumbs, and eggs. Mix well. Form balls the size of golf balls. Simmer in chicken stock for 30 minutes. Serve with rice, if you like.

The day before, heat water and melt sugar in it. Add lemon juice and rose water. Chill the syrup.
The next day, preheat oven to 400 degrees. Place shelled pistachio nuts, sugar, and eggs in a food processor and grind to a paste.

Unfold a sheet of phyllo dough. (You can buy this frozen and then thaw it.) Brush it with butter, fold it in half, and brush with butter again. Continue this process until you have a 5-inch square.
Put a line of the pistachio paste on the dough square and roll it up. Repeat. You should have enough paste for 4 or 5 fingers. Brush with beaten egg yolk, sprinkle with sugar, and bake for 15 minutes. Pour cold syrup over these before serving.

Put all the ingredients in a food processor or blender and mix until mint is completely pureed. Chill and serve.