Like Masa for Matzoh: A Reinterpretation of Hanukkah Dinner

When a Mexican chef marries a New York Jew, dinner heats up. 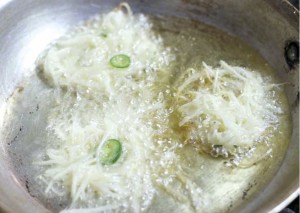 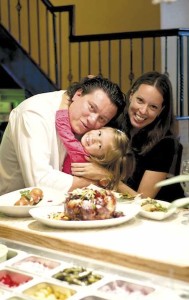 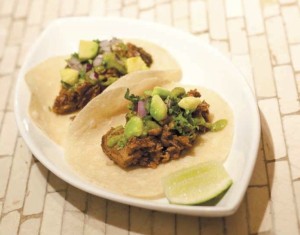 When Julian and Annie Medina discuss how they’ve reinterpreted Hanukkah dinner to reflect the melding of their culinary heritages, you can almost hear New York Post columnist Cindy Adams uttering her signature line Yiddishe mame style: “Only in New York, kids, only in New York.” Though instead of a Manhattan in hand, she’d be making the quip with a Margarita.

That’s because Julian is a Mexican-born chef—he’s the owner of the modern Mexican restaurant Toloache in Midtown and the pan-Latin Yerba Buena and Yerba Buena Perry downtown—and his wife, Annie Sigal Medina, is an observant Jew native to the Upper East Side. The couple met through mutual friends at the South Beach Food and Wine Festival nine years ago. Romance followed.  Julian, who grew up as a Catholic in Mexico City, converted to Judaism and married Annie six years ago, and she now works with her husband on marketing strategies for the three restaurants.

At those, says Medina, “I take traditional (Latin) dishes and convert them to a different standard, to a New York way of seeing and doing things.” Little did his in-laws suspect that he would soon be applying that approach to their family’s culinary traditions, starting with Hannukah.

That holiday, in a nutshell, commemorates the miracle of oil that burned for eight days in the temple of Jerusalem, and it’s typically celebrated with the lighting of menorah candles…and with plenty of fried foods, the most common being potato latkes. Sometimes gray and leaden, sometimes light and delicious, these potato pancakes are almost always accompanied by brisket, and often by anxiety from the holiday cook: Should we toss out Great-Grandma’s heavyweight slabs and try latkes anew? Or must we follow tradition?

Julian Medina found a middle way. Although his wife can’t remember the first time he made latkes, she recalls that his jalapeno-studded cakes tasted a lot better than Mom’s. Ditto his chipotle braised brisket, presented in soft-shell tacos made with matzoh meal in place of masa.

Annie’s family has an open and sophisticated palate she traces to her Turkish grandmother Rebekkah. “Because of her, we were eating black beans and different kinds of grain. When Julian came into our family, we were all very excited about him hanging out in the kitchen, getting involved in meals and planning menus with my mother. He’s definitely raised the bar.”

And also, perhaps, other New Yorkers’ expectations of the potato pancake. Once he won over the stomachs of his in-laws, Julian started to offer a Hanukkah menu to his restaurant customers during the holiday’s eight days. “When I began this, I didn’t want to do something over the top,” explains Julian. “I’m actually very conservative and I wanted to be respectful of the context. But at the same time I wanted to do something people can be excited about.”

The menu includes that soft-shell brisket taco, a trio of latkes—potato, zucchini and cheese, the latter made with requeson, kind of a Mexican ricotta—and the ultimate fried food mashup: sufganiyot, or deep-fried Jewish donuts, filled with the pan-Latin milk caramel sauce called dulce de leche and sweet cream.

From that core menu he expands the offerings each year, adding new and imaginative dishes drawing from both Sephardic and Ashkenazi foodways. His matzoh ball soup foregoes the traditional dill and instead is seasoned with cilantro, jalapeno and a squeeze of lime. The standby smoked fish salad is transformed by tamarind: That flavors swordfish spiked with caramelized apples and chipotle vinaigrette.

In a preview of this year’s Hanukkah, which he’ll celebrate with his in-laws on the Upper East Side as well as with friends at one of his restaurants, Julian plants himself in Toloache’s cramped and hectic kitchen for the lengthy preparation of the braised brisket that eventually gets shredded into a taco filling. Seared, then slow-roasted in a red wine medley of oregano, chipotle pepper puree, tomatoes, onions and garlic, it eventually gets spooned into warm handmade tacos and brightened with chunks of avocado.  “We have something similar to this in Mexico called tacos suadero,” notes Julian from the stove.

“The zucchini latke recipe,” he continues, “is one that I’ve adapted from my mother-in-law”—though the traditional applesauce accompaniment has shape-shifted to a tomatillo apple salsa, sweetened with agave nectar and seasoned with jalapeno. Someone nearby quips that the zucchini and the potato pancakes, the latter also emboldened by same ubiquitous chile, are “to die for.”