For Culinary Bookworms, a Tiny Wonderland Hidden on Greenwich Street

Behind a Greenwich Street door whose plaque simply reads “Cookbooks.” 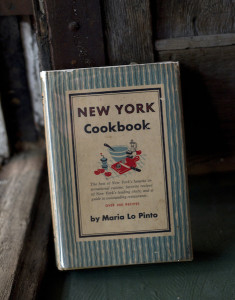 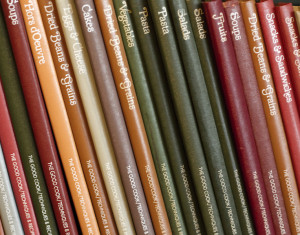 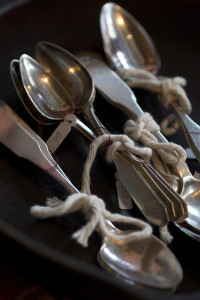 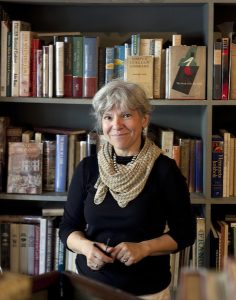 I was in the midst of some serious midlife soul-searching the first time I wandered into Joanne Hendricks’s cookbook shop. It was three years ago, days before my 40th birthday, and I was experiencing that melancholy wondering-about-life that seems to happen when you somehow find yourself smack in the middle of it.

The worn wooden door with its golden plaque simply bearing the word “Cookbooks” drew me in from Greenwich Street, looking for escape from muddy internal dilemmas. The quiet little shop had a calming effect, with its kooky green Victorian wallpaper, shelves and shelves of old and less old used books on the topic of cookery, both the recipe-laden and prose-full, and kitchen-and- table odds and ends—cast-iron pots, a roasting pan, pretty little bone-china dishes, a Campbell’s soup can signed by Andy Warhol. I walked out with a blue, hardbound first edition of M. F. K. Fisher’s Gastronomical Me and a little demitasse cup, hand-painted with golden letters that read, “Remember me,” which simultaneously summed up and eradicated the dilemma of my momentary midlife crisis with its two simple words. But this is the effect that Joanne Hendricks’s shop has. Time slows within the walls of this 1823 Federal-style landmark—which Hendricks, her husband and two daughters have lived in since they bought the building in 1975, and where, long before the urban farmer movement of late, she kept a chicken and rabbits in the backyard. And it’s an effect that’s not lost on Hendricks. When did she open the shop? “You know, I’m not sure. It’s either 16 or 17 years ago in December. Once you get past a certain time span, I forget about these kinds of things.”

Hendricks has a voice that sort of reminds you of Sally Field— chipper, eternally youthful, but with her own special, sing-song cadence; she has a funny habit of holding a syllable for a few extra moments mid-sentence when she’s considering how the rest of her words are going to go, and then out comes the rest of the thought in a melodic stream. It’s a voice made to read books aloud. And certainly one that loves more than anything to talk about them.

“Truman Capote wrote some beauuuuutiful, beautiful stories, like about his aunt and making fruitcake with her. He’s one of my favorite authors, Truman Capote is. And Jane Gregson—a very good British author who wrote a book about pâtés and terrines and charcuteries, I find that fascinating. It’s kind of like witchcraft. Marion McNeil also, she wrote about Scottish cookery from a very historical perspective that puts recipes in context. Oh, and “Old Mr. Flood” by Joseph Mitchell! It’s such a fun story!”

The 1,000, give or take, books on her shelves (she’s not really sure of the number: “What you see is what I have…”) are like this, ranging from straight-up recipe tomes to books where food simply plays a starring role, which makes sense when you learn that Hendricks spent quite a bit of time working in a bookshop before opening her own.

She came to New York City from New Jersey in 1971 as a young art student. “I went to school at Rutgers in Newark but moved to New York City because it was cheaper,” she laughs. “And, I don’t know, I was young. That was the extent of my exploration I suppose, just coming across the river. If I had worked in a doctor’s office, perhaps I would have become a nurse or something like that, but I worked in a bookstore when I was in college, and I just started liking books more and more. Actually, I had always wanted to be a librarian.”

After college, she worked at the bookshop for more than a decade while she and her husband started their family. “They were very accommodating to my schedule and gave us health care coverage—that doesn’t exist anymore!” Eventually she began thinking about her next move. But the idea of working with books wouldn’t leave her mind—especially books about food.

The first floor of their brick townhouse at 488 Greenwich Street seemed like just the spot for a cookbook shop, and so she opened one. At first, Hendricks trawled for the books she loved, then used her favorite authors as leads to stock her shelves. “Some cookbooks would have bibliographies in them from very good authors—Elizabeth David, for one—and from there I would try to collect the books that she thought were important; I would search them out. And whenever I’m traveling I go to other bookstores to look. And I guess I’m also attracted to the way a jacket looks, too. Or the title of a book, which can be really fun. Like The Cook Not Mad, it’s an early comedian cookbook. And then there are books that are just so special because they belonged to somebody and have all these pictures or notes in them. And then they get passed on.”

The neighborhood has changed quite a bit since she arrived, before the high-end chefs and restaurateurs and boutiques and celebrities. “It was a neighborhood at that time. In 1975, it was a nice, quiet little street. Things were almost in black and white. We had neighbors on the other side of Canal Street who had lived there all of their lives. Old New Yorkers, so fantastic. And then there were some people around the corner, my first neighbor I knew, Richard Hayman, who owns the building the Ear Inn is in, and we’ve known him for, mmmmm, a long, long time. When he was younger, and I was younger, and everyone else was younger.”

As the neighborhood has changed, so has her clientele, and brushes with fame aren’t unusual. “One time somebody came in my shop after this young couple had come in, and this person said, ‘Do you know who they were?’ And so I looked at the receipt and her name was Natalie somethin’ or other. And it was Natalie Portman and, her boyfriend at the time, Gael Garcia Bernal. I’ve had Blondie [Debbie Harry] come in, which was really special. And Bruce Weber comes in often because he’s my neighbor. Lou Reed lives in the neighborhood and I would like to have him come in, but he hasn’t. Nor has Laurie Anderson. Maybe they don’t cook?”

But while all this change swirls around the old cobblestone streets, Hendricks still keeps her bound treasures within realistic reach. My Gastronomical Me only cost around $30, and that’s not unusual here. You can walk in with a few bills in your wallet and expect to leave with something good under your arm. There are a few special-special rarities—like an eight-volume early American cookbook set from 1803–1812, or a well-preserved edition of The Book of Bread with its silver gelatin photographs; each of these clocks in at $4,500, but they’re far more the exception than the rule.

She’s been getting into food-related photographs lately, too. There’s a great black and white of Sophia Lauren in her kitchen; a sepia of an olive-tree grove in California; a tintype of suffragists banging on cake pans—moments frozen in time. But it’s among the browned bound pages where Hendricks’s adoration clearly lies. “I have people who came into my shop who said they read about me in a book, and that’s just so nice to know.”