Francis Ford Coppola ate there, too. 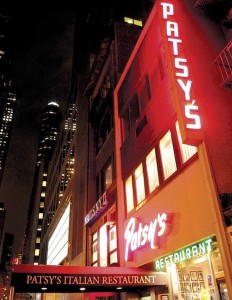 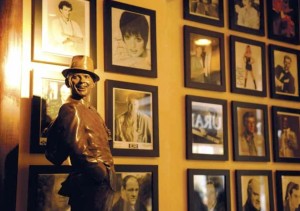 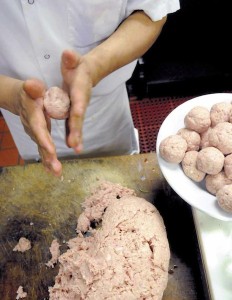 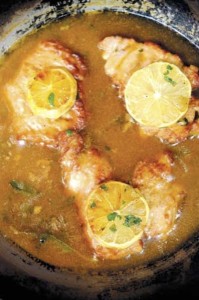 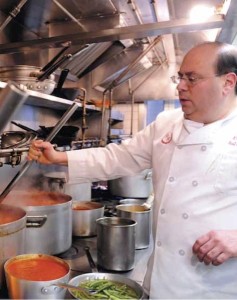 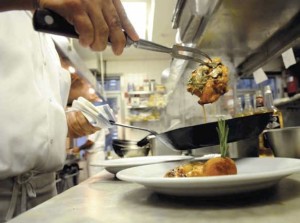 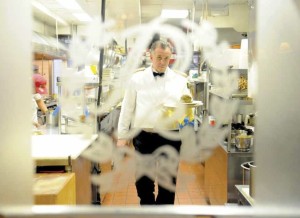 Patsy’s isn’t one of those modern new Italian restaurants that seem to sprout up each week with their own hand-bottled Umbrian olive oil and tiny raviolini filled with farmer so-and-so’s quail eggs-though the 66-year-old spot can surely call out each of its purveyors by name (Lou DiPalo for mozzarella; Carmen Zito for basil) and makes most of their staples (big beat-up pots of silky red sauce; thick gnocchi; fat veal meatballs) by hand.

Instead, Patsy’s Italian Restaurant-meaning the dining room on West 56th Street, not the chain of pizza joints-is the Italian standard of your grandpop’s New York, the kind your father nervously took your mother to before they went to see Guys and Dolls on Broadway in 1965. The kind of place with a neon sign that can send a shiver of excitement down the spine of those mourning the heyday of Little Italy. The kind of place that serves a mound of chopped iceberg lettuce salad dressed to order on a rolling cart just outside the kitchen door.

Patsy’s is where you go for fried zucchini and eggplant parmigiana (both listed under “fresh vegetables”); three-quarter-pound plates of some of the city’s best spaghetti and meatballs, rigatoni fra diavolo, linguine puttanesca and penne alla vodka; stuffed steamed artichokes served whole; veal marsala, veal pizzaiolo, veal scallopini and veal rollatini; and a pile of deep-fried calamari that arrive at your table on a thick white plate atop a curly leaf of kale and a folded yellow napkin, yours to douse with a wedge of lemon and dunk in a boat of that addictive garlicky marinara. And it’s all delivered by career waiters wearing white jackets with slightly fraying gold epaulets and a quiet grace.

Sure, if you’re under 50 (and didn’t read the “12 Restaurants That Matter” in last April’s Saveur) you might not know Patsy’s, but Francis Ford Coppola sure does: Back when he was filming The Godfather, he brought the whole cast in for dinner. Lucky for you, it’s changed little since then: The dining room is elegant, if a bit dated, with mirrored stairwells, white tablecloths and overwrought chandeliers, still a place for the aging set to come for late lunch or pre-theater pre-fixe for a glimpse of the old-school stars of screen and stage that used to hit Patsy’s regularly, some signing the million-dollar book of autographs now stored in the office safe. The majority are also captured portrait-size on the stairwell to the restrooms-where a pay phone, until recent years, got regular action. There’s Marilyn Monroe and Liza Minnelli, Rosemary Clooney and Barbra Streisand, Lucille Ball, Burt Reynolds, Red Buttons, Phyllis Diller, Jackie Gleason, Dean Martin, Sammy Davis Jr. and definitely, most definitely, Frank Sinatra.

Patsy’s was the singer’s Manhattan retreat, his haunt until he could no longer hang, his hands-down favorite place to eat. (Bono once arrived for a table, saying that Sinatra insisted that’s where he had to go.) Old Blue Eyes had become a regular in the 1940s, when Patsy Scognamillo-his real name was Pasquale-cooked for him in the second upstairs dining room where Jimmy Cagney later celebrated his 75th birthday. Today one of two bronze busts of Sinatra holds court on that second floor, along with a painted mural of the feast of Bacanal moved in 1954 from Patsy’s first location next door. (“One of the original tenants,” says Patsy’s grandson Sal, also the current executive chef, “was Atlantic records.  We kicked them out.”)

Sinatra surely liked Patsy’s for its discretion. There’s the hidden quality of the restaurant itself, which, despite its stellar twostory neon sign, you’d hardly notice, hidden off a sleepy street on the northern edge of the Theater District just south of Columbus Circle. Plus the place kept the gossips at bay when the star was in the house-even if Sinatra himself had fun with the clientele.  (One story goes like this, says Sal: “I think Sinatra is here,” a woman frantically whispers into the pay phone. The singer, walking by, takes the phone from her hands. “Yes,” he says with a smile into the receiver, “this is Frank Sinatra.”)

But Sinatra really loved Patsy’s for the food. It’s best-in-class Neopolitan, simple and straightforward, cooked for three generations-first by Patsy, who died in 1986, then by his son Joe, and now by his grandson Sal-from scratch and from the heart. You can still order Sinatra’s favorites: an arugula salad simply dressed with olive oil, red wine vinegar and a few shreds of fresh basil; the littleneck clams posillipo, made with onions, garlic and tomatoes; and the veal Milanese, fried extra crispy. Sinatra, by the way, liked garlic, but knew his limits: The kitchen at Patsy’s would take out the cloves after a brief sauté.

In fact Joe, who was pulled out of school at 16 to work the kitchen, and Sal, who came on board in 1985 after a year of working as a cameraman, have barely changed anything over the past 30 years.  “I’m buying from suppliers my grandfather did,” shrugs Sal, meaning Carmen the basil guy and the brothers behind DiPalo’s down in Little Italy. And until construction next door forced the restaurant to renovate in 1998-“we were closed for six weeks, the longest ever,” says Sal-he probably wouldn’t have ever changed a thing in the kitchen, whose staff still includes a few guys who worked under Patsy.

The menu has changed little since 1946, when Patsy added the chopped salad. There’s still stewed tripe and liver both cacciatore (sautéed with prosciutto, onions and mushrooms in a tomato and wine sauce) and veneziana (sautéed with onions, veal stock, butter and balsamic vinegar) and “calamari goes without saying,” says Sal. “We do it fried, we do it salad, we do it stuffed.” Dom De-Luise, he adds, once came in and made a multicourse meal comprised entirely of squid.

But unlike his grandfather Patsy, who refused to open a place in Florida even when Sinatra begged, Sal has expanded: Beyond bagged pastas and sauces, there’s also now a Patsy’s in Atlantic City. And there was a brief tussle over those meatballs, which disappeared in 1985 thanks to Joe and came back in 1991 thanks to Sal, well before the current renaissance. “I said ‘Dad, c’mon, they’ve been here since the beginning.’ In one week we sold 1,300 meatballs. Tony Danza told that story on his show.”

These days Sal is a frequent guest chef on shows like Martha, and deftly breaks down 27 pounds of veal into scallopini and rollatini- and scraps for meatballs-within minutes, as he’s done two or three times a week for years. (For decades the Patsy’s kitchen has made nearly everything, including the meat sauce, with veal hips bought from Debragga & Spitler way down on Washington Street.)

Surprisingly Sal didn’t grow up with a mallet for veal Milanese in his hand: “Cooking I never did,” he recalls of his childhood. “I didn’t know the difference between parsley and basil.” But when he was looking for a job back in the mid ’80s, his father asked why he didn’t just come work in the restaurant. “I says, ‘I never thought of it,'” recalls Sal, “but now I love it. I get up every day happy to come to work. I could never picture myself behind a desk. And my grandfather, he got to see me take over the business.” (Joe may get to see his grandson do the same thing: One of Sal’s sons, 14-yearold Peter, has already made cookies on TV.)

Instead the twentysomething Sal learned to cook by tailing his father on the job. “The school of hard knocks-it was intimidating for me. The knife,” Sal remembers his father saying, “doesn’t know you’re the boss’s son.”

In fact Patsy’s recipes were never even written down until Sal decided to publish a cookbook, printed in 2002 and graced with a foreword by Nancy Sinatra. (“My father,” she wrote, “absolutely loved Patsy’s restaurant.”) Not that Joe took to the idea of testing recipes at first: “You measure like this,” he would say to Sal, tossing things in by the handful. Today Sal still scoops the sugar for the cannoli cream with a coffee cup.

“It’s just classic southern Italian stuff,” shrugs Sal, acknowledging the simplicity of the food he learned at his father’s side, “but you don’t see it anymore.” Unless, that is, you follow the lights of Patsy’s neon sign.

Mix thoroughly and form into 2 ½ inch meatballs. Preheat olive oil in skillet to 350 degrees (oil should cover half the meatball when frying) Fry meatballs in olive oil, 2 minutes on each side. Take out of oil.  Place the meatballs in simmering tomato sauce and cook another 10-15 minutes.