Greed may be good, but takeout is better. 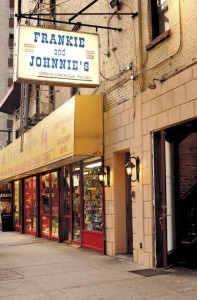 Greed may be good, but takeout is better.

Michael Douglas has been a silver-screen superstar since the 1970s and is still at it: Wall Street 2, directed by Oliver Stone, will be released this fall. We sat down to ask if he has any basic instincts about sandwiches or a fatal attraction to Chinese takeout.

Edible Manhattan: What food memories do you have of your New York childhood?

Michael Douglas: Horn & Hardart was a place where we would eat a lot. Very kid friendly. You put the money in and look in the window and see your actual sandwich. I think it was a quarter, maybe 50 cents. You knew it would be fresh-you see them putting it in there from the back.

The Upper West Side in the ’50s was not a gourmet center, by any means. We’d go on occasion to Sardi’s. That was a big treat. Vincent Sardi was a very elegant host and he paid attention to kids, which was highly unusual. For a hectic place that was tied in to the theater clock, he was amazingly calm and not rushed. My mother took my children, her grandchildren, there, too.

But for me, as an adult: Frankie & Johnny’s steaks. On more than one occasion, when I’m not in New York, I think about those steaks.

EM: What else do you crave when you’re traveling?

MD: Pastrami. You can get pretty much anything anywhere, but pastrami is great at Katz’s. For a half Jew, it’s soul food. It makes you feel comfortable. They’ve also got a great thing about shipping to our troops.

EM: Do you remember your first taste of pastrami?

MD: 1967 or ’68 at Carnegie Deli. I studied acting at a school near the Carnegie Deli. I used to eat there a lot. They make all those wacky sandwiches that you can only eat when you’re under 30. They had famous, huge, huge sandwiches named after different people.

MD: Shun Lee (West 65th Street). New York has to be the takeout capital of the world. Shun Lee is at least 10 blocks or more from here, and you can have it delivered to you faster than you can be sitting in that restaurant. I’d be really curious to know what the average part of most restaurants’ takeout business is. We had dinner at Shun Lee before shooting Wall Street 2 with Jim Chanos, the big hedge fund manager, and Sam Waksal (former CEO of ImClone Systems). We actually shot a scene from the film there.

Catherine: Yes. When we were dating we used to go there all the time. Such nice romantic moments.