Glaser’s Is the Bakery of the Century

The hundred-year-old storefront can still satisfy a sweet tooth. 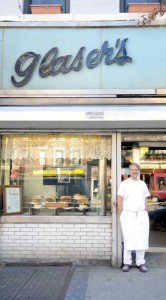 “I won’t tell,” Rita Callahan says with a wink, slipping an extra cookie into a customer’s bag. There’s a steady stream walking in and out of Glaser’s Bake Shop even on this drizzly day, and everyone stops to chitchat with Rita and her colleagues behind the counter. But they’re just part of the reason this Upper East Side bakery has so many regulars: It’s had more than 100 years to acquire them since it opened back in 1902.

Not much has changed since then. The original blue and white tiles still line the floors and the last renovation-the installation of the pressed-tin ceiling and oak cabinets-was in 1918. There are still plenty of black and white cookies, those thick, crumbly circles smeared half with vanilla frosting, half with chocolate and put on the national map 16 years ago after a Seinfeld episode sent reporters to Glaser’s in droves.

Other treats, displayed proudly in glass cases and in trays delivered right from the kitchen, are equally old school: Classic brownies made gooey with a generous helping of Merckens chocolate chips, Viennese butter pecans, apple crumb and lemon meringue pies (available in a large and an adorably small size) and rainbow cookies made with marzipan, chocolate and raspberry.

And on most days Herb Glaser, who runs the bakery with his brother John, can be seen in the kitchen, working busily to the lilting sounds of Mendelssohn’s Italian Symphony. (Glaser’s grandfather, also named John, shared Mendelssohn’s birthplace: a small German town called Waldsassen near the Czech Republic border.) Those cabinets are filled with family mementos-a sepia photograph of John the first at work; Herb’s father (also Herb) baking in the long-gone basement kitchen; a diorama of the bakery John’s sister Catherine made when she was 17-along with more modern memorabilia like a letter from Bloomberg congratulating the bakery’s 100th birthday.

But of all the great things that Glaser’s has collected over the years, the smartest was the building itself, bought outright back in 1902, sparing the bakery from the rising rents that might otherwise have turned this space into a bank, meaning Upper East Siders can save their pennies instead for a cup of coffee and a real Danish every morning, a loaf of traditional German stollen at Christmas or one of those iconic black and whites, each delivered-perhaps even free, thanks to Rita-with the happy hope that Glaser’s sticks around for another hundred years.