At the New School, the global diet is the subject of serious study. 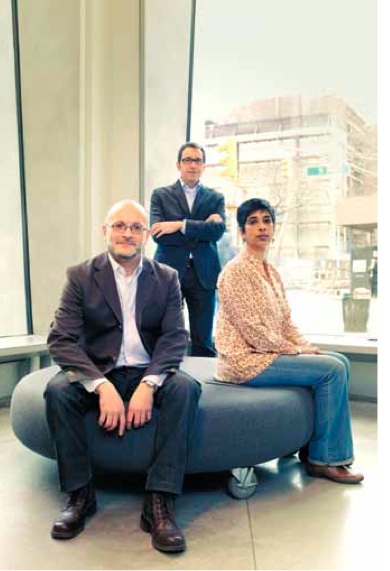 When Lindsay Maas returned from a year abroad studying Greek culture after getting her culinary degree just out of high school, the Long Island native scoured the city for an undergraduate pro- gram that included everything she wanted to learn: a mix of nutritional anthropology, food culture, writing and culinary arts. Not surprisingly, she designed her own degree: “I decided to apply for the City University of New York’s Unique and Interdisciplinary Program,” says Maas “where you could create a major, focus on a very specific part of a discipline, or in my case, merge theories and teachings from different disciplines.”

She ended up with a Bachelor of Arts in “Food Studies: Culture, Writing and Practice” from CUNY. But Maas, who now splits her time catering, working in an art gallery and looking into food media gigs, was ahead of her time: Born a few years later, she would have jumped on the new Food Studies track at the New School—where that kind of genre-jumping, grub-centric curriculum is on offer like an academic buffet.

Of course, the New School isn’t the first ivory tower institution to tackle the burgeoning field of food studies. Undergraduate and graduate programs at NYU and Boston University have been around for more than a decade, and Slow Food’s University of Gastronomic Sciences opened its beautiful campus in Pollenza, Italy, in 2004. But few schools are so focused on social change as the New School, a hyper-progressive university that’s been teaching classes in philosophy, policy, social research and urban planning in the West Village for 75 years. As its mission statement makes plain: The goal is “to bring actual, positive change to the world.”

To that end, food studies classes at the New School focus squarely on hard-core contemporary food policy; global hunger; how to turn homespun recipes into small businesses, cookbooks and restaurants; and food history as a lens to big-picture trends. In other words, instead of “Pastry Arts” or “ Kitchen Hygiene” you’ll be taking “Food Systems Governance: Processes and Practices,” “Hunger, Food Security and the Global Food Crisis” and “Drinking History: 15 Beverages that Shaped America.”

Still, the program’s roots are in the kitchen—the recreational cooking courses the New School launched in 1977. Those classes “weren’t about organic food or sustainable food,” says food studies Multi-Disciplinarians: The varied crop of educators includes Fabio Parasecoli, Thomas Forster and Radhika Subramaniam (above shown left to right).
Program founder Almaz Zelleke, now associate dean of the department, “it was really more about how to roast a chicken… knife skills…wine appreciation…. No ideology.”

But move ahead 30 years—when CSAs are hotter than IPOs, Mark Bittman is opining in the Times about slashing agribusiness subsidies and the First Lady is making school food a federal priority—and it’s no surprise the school decided that food was a ripe fit for the rest of the university’s deep-thinking, do-gooding mantra.

That began in 2008, with a three-pronged curriculum focused on food culture and communications; the environment and sustainability; and public policy. It was created with help from the school’s environmental studies department, led by Nevin Cohen; a policy prodigy named Thomas Forster; and Andrew Smith, the food historian behind The Oxford Encyclopedia of Food and Drink in America. All three now teach in the program.

“Getting engaged in policy work seems complicated but it’s not, and once you understand it, it’s empowering,” says Forster, a former food policy director for the Community Food Security Coalition. His course teaches students both the players and the process, arming them with the information to enact change.

And just last year, Zelleke hired Fabio Parasecoli away from NYU’s food studies program to serve as program coordinator, extending the coursework with a series of events like a panel of students who lived on a food-stamp budget for a week, discussions on food and memory and their effect on how we taste, and even a “pop-up” class at the Union Square Greenmarket where Parasecoli encouraged passers-by to join in on his roving lecture on the institution.
A bespectacled Italian ex-pat, Parasecoli also worked as a journalist for Gambero Rosso, Italy’s foremost magazine on food and drink (it means “red shrimp”) and still counsels on developing food study programs in Barcelona and Rome. His résumé includes a PhD in agricultural science from Universität Hohenheim in Stuttgart, Germany, where he wrote his dissertation on “Food and Men in Cinema” while nabbing magna cum laude honors—and this after completing a graduate fellowship in Beijing. Suffice it to say, notes Zelleke, “as soon as he got here, he was in high demand across the university.”

The New School, explains Parasecoli of his move from one food studies program to another, also offers a bit more flexibility than in NYU’s traditional undergraduate and graduate tracks. At the New School, food studies classes are open to any student within the liberal arts “general studies” bachelor’s degree program. “And most of the classes can be taken independently,” he says, “so they’re open to the general public for those not necessarily interested in a degree.”
This makes for classes (most are capped at around 25 people) comprised of pupils with a wide diversity of backgrounds. Nancy Ziegler, an organizer of the Brooklyn Food Coalition, already had a culinary degree from the French Culinary Institute and a journalism degree from NYU before signing up for Thomas Forster’s “Food Policy for the Local Food Revolution,” one of the New School’s most in-demand courses.

Ziegler says that while food studies classes are maybe not taken as seriously within the academic world, they’re powerfully helpful to her career as a freelance consultant for multiple food advocacy groups, from East Harlem cooking demos to a school garden program in the Hudson Valley.

The program offers several events each semester, open not just to students but to food professionals. “When we had our [Culinary Luminary] talks on Julia Child and MFK Fisher,” remembers Zelleke, “we had people in the audience that were just as interesting as our panelists. We had people that actually worked with them that got up and told their own stories. It was really wonderful.”

Radhika Subramaniam, who directs a gallery within the school’s Sheila Johnson Design Center, finds that food and agricultural programs garner great attendance with informal discussions and often tread unexpected territory—like soil quality. Last fall, in a public series called “Brown Bag Lunch,” students presented research projects from “Food Policy for the Local Food Revolution.” Led by Professor Forster, Nancy Ziegler and Ashby Anglin (a Sarah Lawrence alumna now working for the United Nations) presented their group study on nutritional education opportunities in the city, which turned into analysis of spending on SNAP, aka food stamps, a carry-over from their work in Forster’s policy class.
There are also the courses for students who can’t come to the campus, which lets the New School expand that dialogue beyond the city’s borders. “Food Environmental Health and Social Justice,” for instance, is totally online: “It looks at food deserts, so students create food maps of their own community,” says Zelleke. “And that’s great because students of an online class can be anywhere, so you can get very different kinds of environments into the mix rather than just everyone talking about their part of Brooklyn.” Hawaii and California have been known to tune in, she says, though most students come from the tri-state area.

As for a fully formed major—meaning a bachelor’s in food studies itself instead of a general liberal arts degree with a focus on food—that could come within the next couple of years, predicts Zelleke. “We’ll see where it goes,” says Parasecoli. If the current crop of maxed-out classes and events is any indication, our guess is it won’t take another 30 years to change the program.