The Great Atsby: New York’s First Vermouth Maker Wants You to Think Outside the Cocktail

You won’t find wormwood in this American take on the forgotten classic. 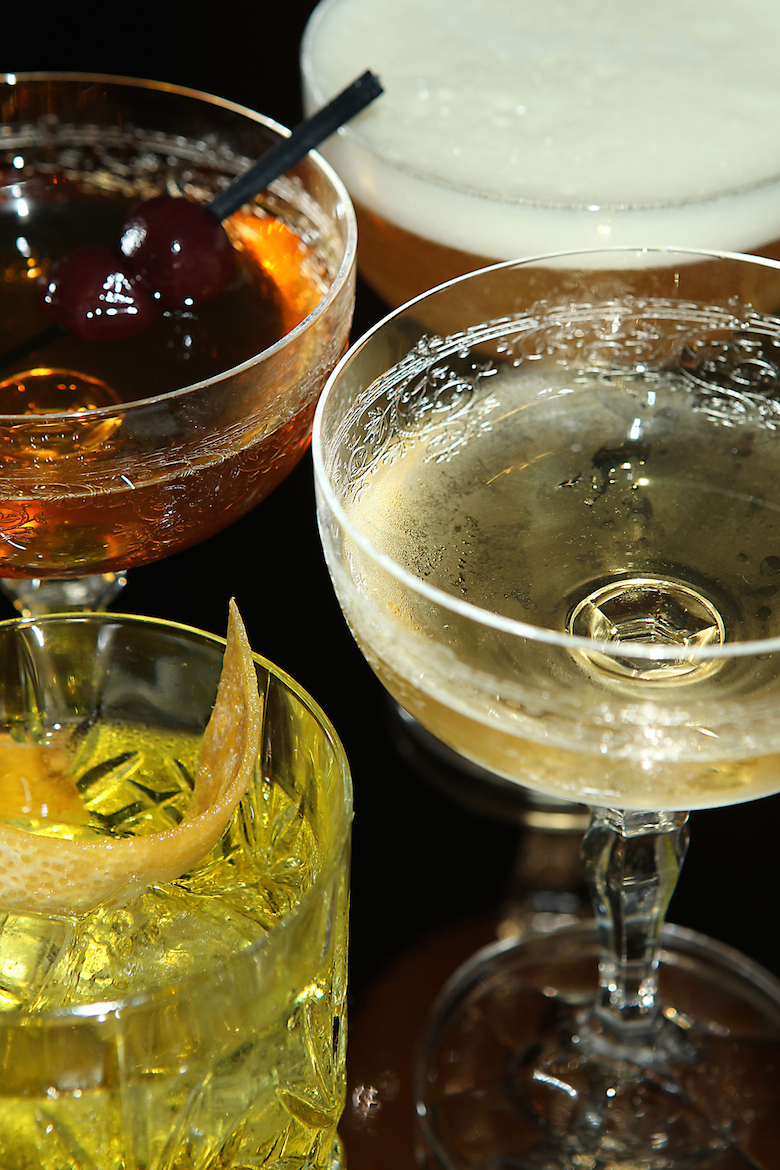 Adam Ford—his boyish face looking like he may well have just walked off the set of Stand by Me—doesn’t appear to be the kind of guy who’d spend a portion of the first decade of his adult life hanging out with Zapatista guerillas in Mexico, among other adventures. With his neat, court-ready dark-blue suit and un-ironic, utterly un-hipster manner, this attorney by trade also does not seem like the guy you’d expect to lead the charge for New York–made vermouth, crafted on Long Island with grapes from two New York wine regions. It’s the first this state has ever seen.

But that’s what makes both Ford’s story and the initial aromatic, flavor-packed release of Atsby as refreshing and appetite-whetting as, well, an aromatic aperitif.

“Once I say I’m going to do something, I do it,” he says earnestly over gnocchi at Barbuto, one of Atsby Vermouth’s first adopters. “No matter how frightening or terrifying.”

It was this adventurous streak coupled with a desire to become a human rights attorney that led him to travel first to Cuba in college with the group Pastors for Peace; then to Mexico before law school at Seton Hall to work with the Zapatista guerillas to help prevent further unspeakable horrors such as the Acteal Massacre in Chiapas; then to Nepal to hike; to Cairo, to complete part of his human rights law studies; and to India just because. Along the way he discovered the flavors of other cultures.

“To be in India and to go to the spice markets…it’s incredible. I’d always come home with bags full of spices.”

Over this last decade of spirit-ual cocktail renaissance, when the popularity of spirits like the once-dusty rye and mysterious herby liqueurs like amaro has soared, vermouth has remained a lesser-known curiosity, even among the well-versed. And for your average, enthusiastic imbiber, its use doesn’t even exist outside the Martini or the Manhattan. For Ford, 36, it was this way at one time, too, until a 2007 fateful trek and a mountaintop epiphany changed it all.

Ford had been introduced to vermouth as something to sip on its own—sans cocktail shakers—via his wife, Glynis, a former ballet dancer who grew up in an Italian-rooted family upstate where the herb-based fortified wine was a normal pre- or post-dinner enjoyment. Knowing kids were in the near future, the young couple decided on one final pre-parental trip: a heart-pounding, hiking-centric vacation up the Tour du Mont Blanc in the Alps. One night after a particularly rigorous trek, he and Glynis toasted their outdoor adventure over a locally made vermouth in the Italian town of Courmayeur.

“We were in a faraway land drinking something local, and it was like nothing else I’d ever had,” marvels Ford. “Not a wine, but not a spirit either.” So, he fancied, why not make such a product in New York?

Back home, he noticed a few newly imported fashionable vermouths hitting shelves over the next couple of years, like France’s Dolin and Italy’s Carpano Antica, while simultaneously bearing witness to the rise in American craft distilling and the intense enthusiasm that followed it. And yet, no one was really talking about vermouth, “and it was so ripe to be improved upon.”

Dating back to the Middle Ages, vermouths were initially made when monks in spots like Turin, Italy, and Chambery, France, would macerate herbs, roots, spices and fruit peels in wine, its alcohol leaching out the aromatic and chemical properties of each botanical. After steeping time, the herby wines were sweetened and fortified with a spirit—often brandy. These potions were used as medicinal elixirs. As it so happened, they also tasted pretty good.

So Ford began to study, taking up near-permanent residence in the New York Public Library, hunting charts that broke down the chemical makeup of spices; he studied the components of botanicals to learn which matched and which didn’t. He read and read again A Modern Herbal, written by Margaret Grieve in 1931. And then a chance encounter with a woman in his building pushed him to the next step.

Sommelier Megan Simmons listened wide-eyed to Ford’s ambitious vermouth hopes and volunteered to help. With her trained palate and his clear sense of what he wanted the final product to be, the two spent several months during 2010 and into 2011 tinkering with the botanical blends. It took until the end of 2011 to finally get the blends just right.

Still, vermouth has by and large remained an understated wallflower of the cocktail world. Something that Ford felt needing to be improved upon—and if it could be done with its liquid base ingredients sourced locally, all the better. In Exploring the World of Wines and Spirits by Christopher Fielden, there’s a line in the fortified wine section that reads: “There is no reason why vermouths should not be made anywhere where there is a plentiful supply of base white wine and herbs to infuse in it.” A sentiment that Ford agrees with wholeheartedly. “I knew I wanted to use really good wine; the only question was North Fork or Finger Lakes.”

The answer was both—he would source the wine from Long Island’s North Fork and the brandy from Finger Lakes Distilling up in Burdett, New York. And the whole production would happen in Mattituck, under the wise guidance of winemaker Russell Hearn at Premium Wine Group. Hearn and Ford talked and talked about the project and the qualities he sought in his vermouth’s base wine.

“He wanted a stainless-steel-fermented, crisp, clean base wine,” says Hearn, who brought Ford many a sample before they decided on the best grape for the job. Inevitably, they chose chardonnay, the second most widely grown grape varietal behind merlot on Long Island, and far and above the most widely planted white grape in the appellation as a whole. “I think it was important to Adam to look at how it could be repeated on a regular basis. If you pick a more obscure varietal, sourcing it might not always be possible, but with chardonnay a relatively large amount of it is planted out here, so you can repeat and increase. Whereas sauvignon blanc or viognier or pinot gris can be hard to source on a regular basis.”

As for the infusions, this was where Ford’s far-flung past came in handy. He wanted each—the golden Amberthorn, and the robust, caramel-hued, curiously named Armadillo Cake—to be not the wallflower chorus-line sipper that vermouth had become in America, but instead, exciting and aromatic fortified wines that could easily stand alone, sipped on the rocks as Glynis’s family has long done, or, perhaps, mixed into a cocktail where their unique flavors were highlighted instead of hidden.

He is close to the breast regarding the exact botanical makeup of his vermouths, but he will tell you this: Amberthorn encompasses 21 herbs, fruits, spices and such; Armadillo Cake has 32. For the former, there is distinct note of springtime aromatics—akin to fresh-popped herbs, lemon-thyme, citrus peel and something reminiscent of the outdoors. “You feel what you feel when smelling something,” says Ford, “but for me this is the smell of fresh-cut grass when I was a kid and damp forests from hiking as an adult.” For this, he cops to the addition of chervil and angelica.

The Armadillo Cake is quite the opposite—utterly exotic, like walking into Kalustyan’s and taking a deep, dizzying breath. You might imagine that the memory it evokes for Ford is the inside of his post-India suitcase after unpacking his smuggled spice-market finds. “It’s impressive—very aromatic and strong flavored,” says Hearn. “A much more intense vermouth than the mainstream. But then again, Adam’s not making mainstream vermouth.”

What you won’t find—and what differentiates it thoroughly from European vermouth—is wormwood. The name for vermouth is, in fact, taken from the German word for the plant, wermuth. The once-controversial ingredient more commonly related to absinthe (and supposedly responsible for hallucinations when sipping the green-tinged stuff—a fancy now proven untrue), EU law dictates must be in the mix for European-made vermouths. But the more Ford thought about it, the more he realized it wasn’t necessary to make a good American version.

“Wormwood doesn’t have a place in domestic vermouth,” he says. “If you want to use it in the United States, you must have under 10 parts per million. So, do you put a pinch in just to be like European producers?” he asks rhetorically. “Why bother? The whole point is to make an American vermouth—I wanted to break European tradition because I thought it could be improved upon.”

And so, it seems, he did. Since launching last September, Atsby has been on shelves at venerable spots like cocktail nerve-center Employees Only, Chambers Street Wines, Le Dieu Wines and Astor Wines & Spirits from its initial run of 350 cases each.

Ambitious and ambling as the process was, Ford found exactly what he wanted—that same notion of uniqueness that he tasted on a mountaintop in Italy; of a spice market in India; of the glasses of vermouth he first sipped with his in-laws. Like an East India Trading Company seeker, bringing what he found back home.

“If I tell somebody out loud that I’m going to do something, then I must do it,” he says. “And that’s what I wanted to do—make an American vermouth for an adult palate.” •