Yesterday’s Indie Spirits tasting at the Penn Club in Midtown was a thoroughly apropos wrap-up to this year’s Manhattan Cocktail Classic. 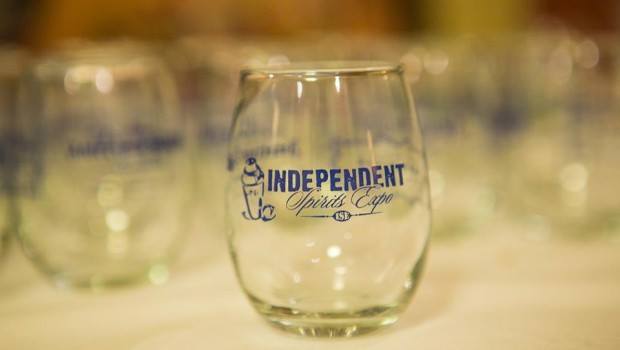 Yesterday’s Indie Spirits tasting at the Penn Club in Midtown was a thoroughly apropos wrap-up to this year’s Manhattan Cocktail Classic. The room — packed shoulder to shoulder with boutique whiskey, mezcal, brandy, vodka, vermouth, and gin makers — well demonstrated the spirit of this five-day deliriously drinkable festival: celebrating the smaller, hand-crafted boutique producers that make the twenty-first century’s burgeoning booze renaissance so exciting. Yes, there are bigger booze makers at the conference, too — Grey Goose, for instance, threw a fab masked dance party at Friday’s Gala in the lower level of the New York Public Library complete with DJ Questlove performing (although it must be noted that Martini & Rossi’s brand ambassador Guiseppe Gallo gets a big, fat boo-hiss for dissing New York-made wine and vermouth at his seminar; manners are always an appropriate thing, paesano — perhaps he should buy a ticket to the upcoming Brooklyn Uncorked and learn a little more about what he’s missing). But my favorite part, other than an excuse forgetting super gussied up for the Gala — which had over 3,000 attendees and 70 spirits brands this year — and running around four floors the main branch like Eloise at the Plaza, is the passion fueling the indie-spirits movement.

Like last year, the New York Spirits room was probably the most exciting place to be, and that’s saying a lot among the four floors of revelry, tasting rooms, acrobats and fine producers from all walks of the world — from a cluster of Peruvian pisco producers to the swingin’ Hangar 1 “Craft in a Glass” lounge, where bartending royalty like Julie Reiner (of the Clover Club, Flatiron Lounge and Pegu Club) swirled a silver bartender’s spoon like a magic wand, and tipples were tipped in charming mason jars. It speaks to the resounding success of last year’s first-ever New York room that a repeat grant was awarded from the TasteNY wing of the Gov’s office to make it so again. “By helping our local producers participate in this international showcase, we are raising the profile of New York’s craft spirits industry and supporting jobs and economic activity in communities across the State,” said Governor Andrew Cuomo in a press release. “I am proud to see our local distillers participating in this renowned event.”

Who couldn’t be? In a room anchored by an enormous chalk-board map of the state pointing out the 34 producers in the room that night, distillery owners and even some great guest-star bartenders and bar owners (like Brian McKenzie of Finger Lakes Distilling who made a slammin’ Manhattan and Fort Defiance’s St. John Frizell, who crafted a pretty mean punch — no surprise there) were mixing, shaking and pouring myriad cocktails and straight-up spirits like there was no tomorrow (and, well, for some of us there may well have been a sleepless sunrise), showing off their deliciously drinkable hard work.

During the Industry Invitational, seminars on everything from tequila terroir to the science at work in drinks mixing to the American vermouth revival (a panel I was proud to moderate with an amazing team of speakers — bartender Franky Marshall of the Dead Rabbit, bartender Sother Teague of Amor y Amargo, Imbibe magazine’s executive editor Paul Clarke and top billers, Adam Ford of Atsby Vermouth and Bianca Miraglia of Uncouth Vermouth) kept the Convene meeting space in downtown Manhattan buzzing, as did the many tasting rooms and great cocktails and pours that seemed to be everywhere you looked (a favorite: Jack from Brooklyn‘s Sorel, mezcal, grapefruit cocktail that I’m pretty sure is going to be the house quaff this summer). And last night’s Indie Spirits event brought together many of New York’s finest producers, like Hillrock, Tuthilltown, Prohibition Distilling (who are launching their first bourbon — exciting!) and Dutch Spirits, but also folks from further afield, too, working their small-batch magic, like Paul Hletko of Few Spirits in Illinois and my new favorite, Sonoma County Distilling (I am still swooning over their delicious rye — holy moly). Although exhaustion has thoroughly overtaken my possibly over-saturated countenance, the day after I’m thinking about next year’s and all the great, new hooch that’s going to come online between now and then. But in the meantime, look for more stories on our pages of great new distilleries discovered over the past weekend and, we expect, in the months ahead. Big things from small packages — dig it.