Wait… did someone say Mercedes Roadster? 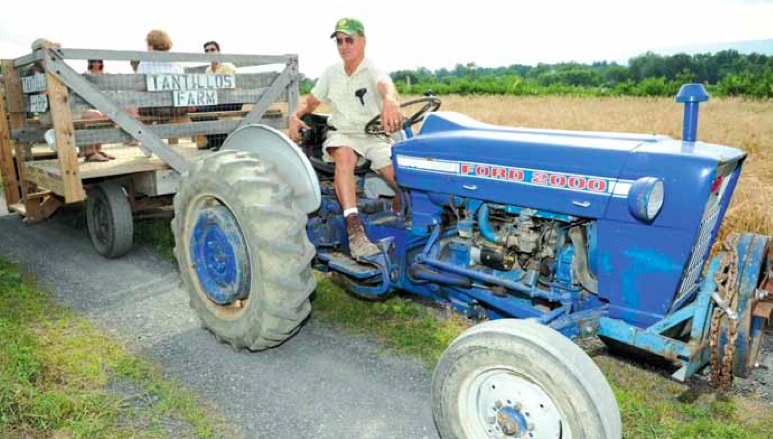 As a longtime locavore, I only eat ingredients grown within shouting distance, thus keeping my carbon footprint so low that I can maintain an air of moral superiority. When my grandkids ask what happened to the polar bears, I’ll assure them I had nothing to do with it.

So when I got an invitation to drive upstate to tour farms whose Greenmarket stands I’ve been frequenting for years, I had to decline, even though it would also mean spending the day with Chef Daniel Kluger of ABC Kitchen whose fine fare we laud in the current issue. Yes, it takes a real strength of character to forgo such pleasures, but one must remember the melting arctic and moreover I never….wait…did someone say Mercedes Roadster?? Where do I sign!

Sorry, where was I? Ah yes. Our fine friends over at Bullfrog & Baum recently arranged a fabulous day trip to some of my very favorite Hudson Valley farms and the good people over at Mercedes Benz (who sponsor the coveted James Beard Award for Best New Restaurant, which this year rightly went to ABC Kitchen) made sure that we esteemed food editors enjoyed the luxury treatment we’ve long dreamt of. No, not a coveted seat on a Q train with actual working air conditioning, but the next best thing: we each got keys to a sweet 2011 two-seat convertible whose GPS had already been programmed with coordinates for five upstate farms, where we’d help Chef Kluger forage for ingredients before gunning it back to ABC Kitchen for dinner. Outside the dealership I found my silver SLK in the lineup, dropped the top, revved the engine, and tooled over to the West Side Highway for points north.

As our editorial entourage headed across the George Washington Bridge and up towards Orange County, my eco-angst dissipated like diesel vapors in the summer breeze. Heck, this baby gets 26 mpg on the highway! So instead of listening to the Best of the Left podcast I’d downloaded, I found Britney Spears on the Sirius radio and discovered that yes, the air conditioning can keep you cool even while the top is down. I could get used to this. In the immortal words of Ferris Bueller—if you have the means, I highly recommend picking one up.

First stop, Paffenroth Farm—or as the owner, Alex, calls it, Paffentroth Gardens, though with perfect rows of produce stretching out nigh to the horizon, it blew the socks off any garden I’d ever seen. The farm (oops—garden) is right smack in the black dirt of Orange County, former muckland which Polish immigrants drained about a century ago, creating some of the richest soils anywhere in the country. Here the topsoil can go down as much as twenty feet. Called “black dirt” for good reason – it looks like chocolate cake (devil’s food cake, I’d say) –it’s so soft, structures can’t be built on it. Thank goodness, or it would have been long since lost to development—instead it’s home to some of the most productive farms in the state, little more than an hour north of the city. 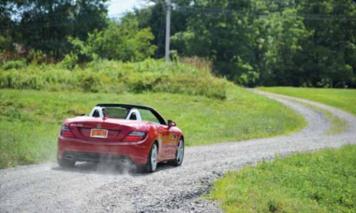 Cruising through the Hudson Valley in a Mercedes roadster.

Like most farmers in the area, Alex once monocropped onions, but in the eighties found that he just couldn’t make a living selling wholesale, experimented with a stand at Union Square and never looked back. Today he still grows onions—and scallions and shallots and leeks—as well as over a hundred other crops. In fact he’s known for having one of the most spectacularly diverse stands at the Greenmarket, growing six colors of carrot, twice that many varieties of winter squash, a bevy of beets, an incredible Japanese sweet corn called Mirai, and more chicories than you can shake a stick at. All this means he’s a favorite among the chefs, with the likes of Jean-Georges, Blue Hill, Gramercy Tavern, the Modern and all the other top toques vying for his veg. Kluger has been buying from Alex forever and was thrilled to see the soil from which it all springs. When Alex invited us out to the fields, we left our roadsters by the barn and hopped on the back of his flatbed truck for a ride out among the long, long rows of lettuces. The fine black dirt filled the air and dotted my skin, browning me faster than any auto-bronzer.

Next stop: Windfall Farms, twenty minutes and a world away from the black dirt. Here my old buddy Morse Pitts is grows specialty salad stuff beautiful enough to make Alice Waters gasp—and expensive enough to make Donald Trump do the same. Yes, Morse spoke passionately about food justice, but you might need to save your lunch money for a few days before splurging at his stand. Well worth it though—his zucchini blossoms are sold the same day they’re picked, his husk tomatoes taste like locavore pineapple, and his spinach sells out at $30 a pound. Yes, you read that right. We strolled the fields, munching on snow peas (thank god he didn’t bill us) and hearing the very real development pressures he’s under.

Turns out that it’s not always so great when your land value skyrockets. Now that Newburg is a prime place to build corporate shipping centers, Morse’s sisters, who are equal owners of the land, are keen for him to sell and divvy the millions. (Wouldn’t you be? Think of the SLKs you could buy!) So Morse is bracing for the inevitable bulldozers and exploring options, perhaps using his share to buy protected land in the Watershed, with his goal being to leave a viable farm when he dies. Which will probably be in three hundred years, given the quality of his diet. 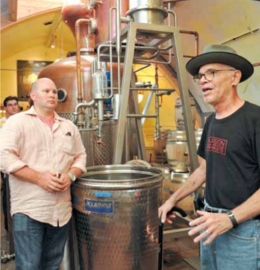 Speaking of, my stomach was starting to sound like a diesel engine, so we pealed out of Windfall and followed the GPS to Tuthill House at the Mill, where I devoured a delectable roast beef sandwich and my weight in beet salad, while talking with my mouth full to Ralph Erenzo, the genius behind the adjacent Tuthilltown Spirits and, arguably, the entire Empire State small-batch whiskey boom. I’d visited his distillery before, but today’s tour and subsequent tasting made two things as clear as his apple vodka: that Tuthilltown’s product is killer, and that the one true path to an enlightened food system is policy change. Ralph regaled us with his mash methods and spectacular stills, but it all would have remained a fantasy had he not helped persuade the state to create a new class of spirits producer, with a license fee of $1,450, compared to the $50,000 fee for industrial outfits. He also got NY Agriculture Commissioner Patrick Hooker to officially declare his distillery a farm. Forget voting with your fork—let’s take this approach with the Farm Bill! Marion Nestle and Michael Pollan would be proud.

Tuthilltown landed that ag status because it buys local fruit and grains by the truckload to ferment and distill. Being a bunch of dorky journalists we were eager to see the upstate amber waves of grain, and lucky for us the next destination was Tantillo & Sons Farm, a nearby orchard and PYO operation complete with a roadside stand and requisite softserve that also grows grains for Erenzo and co.

We’d come to see the special-request rye but first I pounced on the rhubarb patch, scoring an armload of taut pink stalks; I also snagged their last two quarts of sour cherries which would be ice cream within 24 hours, and then eaten within 24 seconds. I tucked my take in the trunk and then joined the gang for a hayride around the property. The family’s bread and butter has long been tree fruit – cherries, apricots, peaches, apples and pears—which they sell fresh and as cider, jelly, and in award-winning pie. But the Erenzos commissioned a field each of corn and rye and the Tantillos were glad to comply. The strip of heirloom grain borders a peach orchard that was heavy with nearly ripe orange orbs us city folk couldn’t resist picking.

Our last farm destination was Lynnhaven, an award-winning goat dairy run by Lynn Flemming. I’ve developed a dependency on her fresh feta and chevre over the years and was happy to ask the nannies for their autographs; unfortunately they misunderstood and ate my notebook. Lynn began breeding show goats eons ago but now milks twice a day and sells 500 pounds of cheese a week at Union Square, Grand Army Plaza in Brooklyn, and to clued-in chefs like Kluger. (She also sells goat meat, which you should eat more of.) Our mouths full of cheese, we learned what goats like to eat (everything), and about her abundance of whey, which is a waste product for her, but which pigs find delicious—and which in turns makes them more delicious. Lynn isn’t looking to deliver whey in her spare time but would be glad for anyone with pigs to call and haul it. Know anyone? I considered loading a few gallons into my backseat but recalled there wasn’t one.

We caravanned back to the city, and convened at ABC where Chef Kluger cooked us up a feast studded with the day’s spoils. That pizza is tough to beat but I ate myself silly on vegetables, including gorgeous wax beans and a superlative salad bedecked with an item that stumped us ingredient dorks and turned out to be a radish seedpod. Wow! We toasted our new BFFs at Mercedes (who totally get great food) and mournfully handed the keys back over, then washed away our SLK mourning with too many Manhattans featuring that lip-smacking locavore liquor, Tuthilltown rye. But the evenings crown jewel was a chocolate cake; admittedly that might not sound like a locavore standby but Chef Kluger said the frosting was whiskey kissed, and I swear he also swapped out the flour for a few cups of Alex Paffentroth’s beautiful black dirt.