Meet Your Milkers Over Breakfast at Sunny Slope Farm 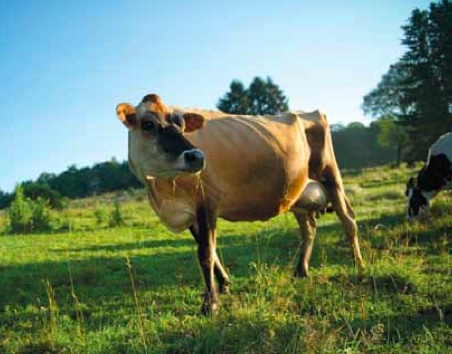 People go to Cooperstown for baseball, Ommegang beer and the Farmers’ Museum, but we think it would be worth the trip just for a night at Sunny Slope Farm, a working dairy with a bed-and- breakfast right in the family farmhouse. There’s a dining room, of course, but mother, wife and co-owner Patti Brunner says, “we’ve found, over the years, people want to be in the kitchen.”

Blame the wafts of homemade pancakes, muffins and sausage (from her daughter Lisa’s small on-site pig herd), seasonal fruit from nearby u-pick farms (like apples from Sharon Orchards) or Patti’s breakfast casserole: shredded potato, ham, cheddar cheese and cream. Dairy is understandably something of a specialty here—there’s plenty of fresh milk, butter and even blue cheese, fresh from the herd, but bearing the Organic Valley brand.

That’s because Patti and husband Cliff are proud members of the Organic Valley Cooperative, selling their milk through the new state-exclusive New York Fresh line that launched this March and now counts 123 active upstate families, some of whose faces you may recognize from the portraits on the cartons. The Brunners bought the 230-acre, 45-cow farm from Cliff’s parents in 1988, but it’s been in the family since 1933, and many of the furnishings harken back to 1815. Joining Organic Valley was “the only answer,” Patti says flatly.

That’s not just because OV is organic, hyper-local and insists on humane standards, but because it’s an honest-to-goodness farmer-owned co-op. “Everybody has a say,” Patti says, of the business structure. Like at the annual meeting, when a stable, month-to-month price point is established for the year.

“We give 54 percent of the dollar back to the farmer,” explains coordinator Peter Miller, “and we always let them know where the other 46 is going.” An organic-abiding bottling plant in the Catskills allows for a completely local operation, notes George Siemon, Organic Valley’s CEO, or rather C-E-I-E-I-O. “One of the things farmers really want is to see their milk sold and labeled locally.” So that’s what they’ve done, dividing the country up into six regions— from a Rocky Mountain line, through the Heartland and up to the Northeast; “California Pastures” is their only other state-specific label, and New York “has always been a great market,” says Siemon.

At Cliff and Patti’s dairy—where their children now raise their own kids in homes on the property—guests are invited to live like farmers. Wake in a high-headboard bed, warm up by the old Jøtul woodburning stove, and, on the way to breakfast, admire old photographs of Cliff’s dad working hay with the horses, as well as the bovine-themed art gifted by former guests: “I have a lot of cows,” laughs Patti. “I think my daughter counted over a hundred downstairs.”

The two guest rooms (each with a private bath) are open from mid-May till around Columbus Day and go for $105 a night per couple. There’s no Web site—they run fine on word-of-mouth alone—so just ring the house at 607.547.8686, and come hungry. Or work up an appetite while visiting.

“If we have a newborn [calf], I’ll ask if guests want to bottle-feed the baby,” promises Patti. But unlike the hardworking family, guests can take it easy during the twice-a-day milking. Most immerse themselves in our national pastime, hit the Ommegang Brewery or experience old-school agriculture at the Farmers’ Museum. But with a breathtaking view of cow-dotted pasture, it’s no wonder Patti reports that “some people just sit on the porch.”