The view of every diner. 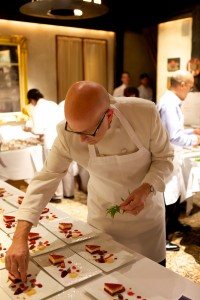 By 10 a.m. on Monday, the team at Gramercy Tavern had already started clearing furniture and setting tables with red and orange flowers and cards for the 18th Annual Autumn Harvest Dinner, the annual multi-chef benefit dinner and silent auction Union Square Hospitality Group helps put on for Share Our Strength, the organization that hopes to end child hunger by 2015. “It turns into a completely different restaurant,” says executive chef Mike Anthony as servers started to light candles later in the day. “It’s as exciting for the kitchen as it is for out here.”

It’s the second year the dinner was held in the Tavern, after several years at Eleven Madison Park. It felt a little like a homecoming, and for many of the five chefs participating, it was: Nick Anderer (of Maialino) is a former Gramercy executive sous chef; Jonathan Benno (now at Lincoln) worked with Anthony at Daniel.

“It’s a humbling experience,” says Anderer. “These are people I’ve looked up to for years as a sous chef… and inspired me to be where I am now.” And Michael Tusk (now at Quince, in San Francisco),  is always looking for a good excuse to be in New York: “He had come into the restaurant a while ago,” says Anthony, “and I just loved talking with him, so it seemed like it would work out to invite him into the kitchen.”

With this group it was natural to go with a meal with an Italian bent, “this idea of warmth and comfort,” says Anthony. The menu was a year in the planning–from the moment last year’s was over, says sous Saman Javid, including the months-long search for the city’s deepest, darkest plums, actually named “The Heart of Jesus Christ.” “We were hoarding them for the sorbet,” says Gramercy pastry chef Nancy Olson, who had sent a staffer on the mission to find them. “They’re deep gorgeous red through and through.”

The event uses about three times the typical workforce here to deliver five courses assembly-line-style to 150 seats, about thirty more than last year. Luckily the whole “too many chefs in a kitchen” problem doesn’t apply here—each chef and his crew have taken on one dish; and everyone knows their place. “You think it’s going to be all these big egos bouncing around in there,” says Anderer, “but it’s not like that at all. These guys all have such hospitable personalities.”

Each dish is then lovingly passed down the line and looked over for perfection—another plate wipe; re-situating a wedge of cod so it’s sitting up proper; tweezers topping it all off with herbs. On the side, a few chefs are responsible for all the alternative dishes (vegetarian, gluten-free), like the sizzling zucchini being tossed, quickly salted, then laid down to drain.

After the Champagne and hors d’oeuvres—skewered smoked duck, deviled hen egg, crispy Island Creek oysters with pickled daikon, among others—the first course is lined up and out by 7:30: a soft and rich plate of glazed carrots and calamari (grilled then marinated to soften like silk for hours in herb-y oil) in a lobster sauce with pickled eggplant, compressed apples and a spike of lemon. “Mmm—it’s beautiful,” says White House pastry chef Bill Yosses, after a taste taken atop the back ice cream cooler. He’s on hand to assist with the desserts. (He’s also impressed with the Sullivan Street bread, as he inspects its texture. “It’s whole wheat, without the sourness of whole wheat.”)

Down in the basement, Olson, who’s mastered the art of gentle-yet-exacting order, is checking in on the preserved plum-and-lemon layer cake (a twist on a butter cream-and-ganache Opera Cake, says Yosses); the autumn leaf-looking chocolate-pecan-and-candied-orange petit fours; the poached plums; the chocolate-caramel-pumpkin-seed brittle; and the concord grape marshmallows. “It’s a little Wonka Wonderland,” grins Olson.

Then, there’s the apple fritters, which by early evening she still hadn’t yet decided whether to call doughnuts or fritters, or whether to glaze them or powder them, but cinnamon would decidedly make either better. (“What’s in a name, ya know? It’s a fried piece of dough.”)

The layer cake, soaked in house-made limoncello and finished with a sugar-ed grape, strawberries, deep-red plum sauce and a leaning raspberry sugar disc, is “delicious chaos,” proclaims Yosses. “Chaos” is a favorite word of his throughout the night. The ballet upstairs is also pretty chaotically beautiful. There’s only the sound of spoons swiping pans and chefs warning where they’re going next—”behind,” “corner,” “up,” “down”—but mostly, it’s a constant unspoken swerve in anticipation of others’ moves, kind of like maneuvering through Midtown with a plate of something hot. That’s not to say that the predictable plates of tonight are less work than typical service, though they are very aware of the historical and charitable purpose of the moment, as line cooks take time to stand back and snap memories with their smartphones.

The second course is ready before 8 p.m.—Anderer’s soft and iridescent olive-oil poached cod, served with a generous chip of homemade crispy pancetta over a stew of fava beans and oven-dried-and-preserved tomatoes. Any extra plates are quickly spooned-up by anyone near enough to taste. Next comes course three: Michael Tusk’s agnolotti dal plin (“pinched pasta”) with squab, served in the squab’s own rich roasting sauce plus some red wine; a regular dish for Tusk back in San Francisco. It’s like a buttery stew in a bundle, something you feel you shouldn’t eat too much of.  “Is that a good thing?” asks Tusk. Yes it is.

The last course—a local whey-fed porchetta from East Chatham-based Raven & Boar, prepared by Benno—is out by 9:30 p.m., which means sounds have now turned to water-spraying and pot-clanking as the crew cleans up and pours wine for a successful run of service; think high-class locker room.

In the next room, the dessert crew takes their place just outside the dining room. There’s no noise here. Honey from the White House gets silently swirled down in droplets; herb flowers of Thai basil and marigolds, placed delicately. “I think we’re done basil-flowering,” says Olson. “Really beautiful. Great job, guys.”

They’ll all wait for the last of the auctioneer’s chanting, now audible through the kitchen—”Ladies and gentlemen, this is for a trip to Ireland”— for the scoop of sorbet to go down on the plate before the line of servers take it away, much like a backstage set call.

What’s left, Anderer picks up (“This is the first plate of food I’ve had,” he laughs.), while a server comes back to report that guests are wow-ed: “When you put it down, there’s like, an audible in-breathe.”

Back in the dining room, auctioned items are boxed and signed out over the Blue Bottle coffee and stickily-good glazed apple fritter-doughnuts at the bar. It’s another great night for Share Our Strength—with a record of more than $300,000 in direct proceeds—and for the work-family of chefs on the east and west coasts, who now head off to the after-party with back-pats, hoping to do it all again one night soon.