A Second Line for Ray Deter Tonight at d.b.a in the East Village 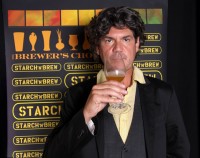 In New Orleans it’s a common custom to say goodbye to those who’ve passed with a second line — a jazz-filled informal parade of friends and family displaying as much joie de vivre as they can muster, in order to make the occasion a celebration of the spirit of the person as much as it is a time to mourn their loss. Tonight at 7 p.m. the bar d.b.a in the East Village will be spearheading a Second Line for their co-owner Ray Deter, who died at the beginning of the month.

When he wasn’t at one of the two d.b.as on First Avenue or in Williamsburg, Deter spent much of his year in New Orleans, where he co-owned a d.b.a. outpost on Frenchman Street. Deter was beyond beloved in all three communities, and was huge part of this city’s craft beer scene. In fact he helped co-found the Good Beer Seal and July’s Good Beer Month, which we’re celebrating with extra-oomph in his honor.

There have been many memorials in print since he died on July 3 — he was hit on his bicycle on June 27th — and you can read them all and post your own memories at the Manhattan, Brooklyn and New Orleans Facebook pages for the bar. There’s also a compilation of his work on Heritage Radio Network’s Beer Sessions, the show he co-hosted with his Good Beer co-founder Jimmy Carbone.

Tonight’s second line is open to the public, and you’re asked to bring a candle, an umbrella if you like (traditional for Second Line marches) and even a tambourine, if you have one. It’s also customary for ladies to wave a white handkerchief; we’ll be waving ours and hope to see you there.