The quirky couple behind the Greenmarket’s best small-batch bakery. 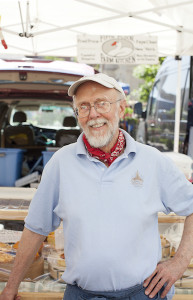 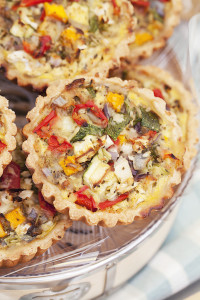 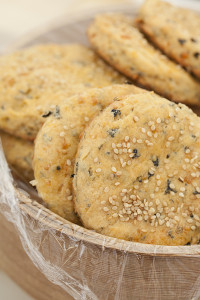 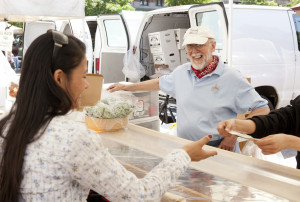 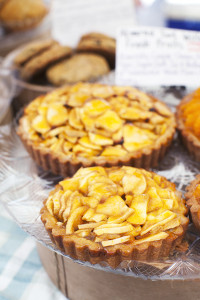 As usual, Fred Price was on his game one recent Saturday at the Union Square Greenmarket. A pretty young woman had come up to his stand, Fifth Floor Farm Kitchen, and was having trouble deciding which of the unusual selection of baked goods she should buy.

“I usually save my dairy for the holidays, but all your stuff is so great!” she exclaimed.

Among the many pleasures of market day for him is lighthearted flirting with beautiful women (a special weakness: ballerinas with perfect posture). This particular customer, documentary filmmaker Gina Abatemarco, managed to walk away both happy and dairy-free, with one of Fifth Floor’s B&B Pancakes, unusual garbanzo-and-barley discs with a hint of soy that taste a little like falafel’s hippie cousin. Abatemarco, who is not a strict vegan, says that though she doesn’t like baked goods in general, “when I saw what they had on display for the first time, really, my jaw kind of dropped. What they do is very simple, rustic and feels very inviting.”

Instead of the mountain ranges of sugary plastic-wrapped goods stocked by many other market bakers, she was captivated by a handmade, in-season, small-batch plum tart suitable for framing. “It was like something I aspire to in life, that simplicity,” says Abatemarco.

Fifth Floor’s quirky, original and delicious goods, tucked in between a Pennsylvania Dutch pretzel stand and a Finger Lakes winemaker on the west side of the market each Saturday, are easy to miss. For those who do stumble upon it, the bakery’s effect tends to be revelatory. For 29 years now, Price and his wife, Faye Chan, have been selling their from-scratch, small-batch, seasonal goods—each spouse carving out a very distinct niche from the other. Chan’s specialties are savory items that seem to hail from a more wholesome planet, including her seaweed-wrapped rice and nut roll, which has spawned a coterie of addicts; her fiery seaweed cheese biscuit and her summer hit, a quiche-like tomato pie made with produce from the couple’s 10-acre garden in the Finger Lakes region. Stubbornly individualistic (red bean turnover, anyone?), these are not goods that pander to a sugar-addled or supersized market.

Price, meanwhile, has mined his own ethnic heritage to become something of a historian of Hungarian and Polish baking. He’s collected every Hungarian cookbook he can find, and through trial and error has perfected a repertoire of rare treats that evoke the honest, wholesome baking of generations gone by, only with a lot less sugar than Grandma might have used. His newest creation, Almás Pite, Hungarian for “apple cake,” is a brilliant assemblage of thinly sliced, lightly sugared apples sandwiched between two layers of cake. When Mario Batali sampled it recently, his appreciative comment to the baker was, “You still got it.” In season now are Price’s Hungarian fruitcake filled with blueberries and homegrown rhubarb, and Chan’s fresh fruit tart of peach or plum, garnished with homegrown raspberries and strawberries. Another fan favorite is Price’s Hungarian rice cake, essentially rice pudding baked in a sheet cake pan and cut into squares. All are made with ingredients in keeping with the Greenmarket mission: butter from a nearby Mennonite farmer; eggs and goat cheese from Price and Chan’s neighbor; fruit from area farms or their own garden; and organic local grains.

This is not, in other words, your run-of-the-flour-mill, cookie-cutter bakery fare; it’s the product of more interesting minds.

“They put their heart and soul into what they prepare,” says John Martini, owner of Anthony Road Wine Company and Price’s neighbor at the market each Saturday. “The quality of their products and their approach is really special.”

The originality of Fifth Floor (the name refers to the fifth-floor walk-up with the tiny kitchen on 175th Street where Price and Chan first began baking in 1983) begins to make more sense when you get to know them.

The son and grandson of Ohio steel-mill workers, Price fell in love with jazz in the army and came to New York City in 1959 to escape both the army and the mills. From his East Village pad, Price worked an office job by day and haunted jazz clubs by night, drinking in performances by his idols Lee Konitz and Thelonious Monk. He also fell in love with photography, working a string of darkroom and studio jobs and becoming an accomplished printer whom colleagues considered a wizard of white tones. Price has exhibited his works on and off since 1972.

He’s also moonlighted as a public radio disc jockey and host, and is an omnivorous and enthusiastic autodidact who peppers his conversation with Oscar Wilde quotations, strong opinions (“Susan Sontag was a moron,” John Updike’s writing is “too bourgeois”) and a constant stream of jokes and one-liners. One day it’s a joke about a lady airline passenger who employs pepper to induce herself to sneeze and orgasm at the same time, the next it’s a jazz musician favorite, about a guy who dates Siamese twins. “He should have a snare drum next to him,” says videomaker and Fifth Floor addict Peter Shapiro, who was so taken with Price that he posted a series of short video interviews with the bearded oracle/comedian on YouTube.

Chan was born in Canton, China, and emigrated with her family to America when she was eight. As the second-eldest of 10 children growing up near Manhattan’s Chinatown, she recalls, “I was babysitter, cook, washer, everything.” She dropped out of New York Community College because, she explains, “I didn’t want to waste my time in college. It was always my intention to go back, but I never found a reason to. Everything I wanted to do I learned on my own.” Chan always liked working with her hands, so found jobs as a jewelry maker, cook and weaver, becoming an accomplished photographic printer as well. Chan met Price, 12 years her senior (she’s 63, he’s 75) at a friend’s apartment in 1971. He challenged her to a game of chess, and they’ve been together ever since.

After spending three months traveling the world in 1983, the couple returned to find that Fred’s photographic job, from which he had taken a leave, had evaporated. Chan had quit her dull office job before the trip. “We needed to do something to make a living,” recalls Chan. “We went through the farmers market and looked at what people were doing, and decided we could do better.”

For the first few years, they tested new recipes constantly, winnowing their selection down to items that tasted great and traveled well. Price focused on desserts, and Chan, the more health-conscious of the two, developed her Asian-inflected savories. Her rice and nut roll, made with “sweet” or glutinous brown rice, Brazil nuts, sunflower and sesame seeds, fish sauce and nori seaweed, was inspired by nutrition evangelist Gary Null’s rice salad.

In the nearly 40 years since, while Chan and Price developed an increasingly offbeat repertoire, many bakers joined—and some say diluted—the Greenmarket with goods that seem more inspired by Sara Lee than by the Greenmarket mission. Through it all, Chan and Price have eschewed the predictable and stayed on the road less traveled—and less profitable—selling a handful of handmade tarts each week while their competition hawk oversweet muffins and seaweed-free cookies by the hundreds.

“If I were to think of two words to describe Faye, they would be ‘talented’ and ‘generous,’” says Diana McClure, an artist who sells “Fairie Houses” at the Ithaca Farmers Market, not far from the Fifth Floor Farm Kitchen stall that Chan runs on Saturdays. “She has great ideas and then she does them,” adds McClure, unlike the majority of “artsy people who have ideas. She’s a very hard worker, and her food, you can tell it has a lot of finesse.”

During the 18 years that Chan and Price lived in Jeffersonville, in the Catskills, in addition to baking, they were poultry farmers, raising every type of bird from chickens to quail and guinea hens. For several years, they also operated a bed and breakfast. But when two major floods within two years decimated their kitchen, the couple sought higher ground in Moravia, near Ithaca, in 2008.

Chan, an avid and fearless gardener, reports that they are extending their growing beyond their current 10 acres and that they now grow 60 different crops—everything from squash and Swiss chard to specialty Chinese produce. Besides foraging for ramps and morels, Price has started cultivating shiitake and blewit mushrooms; when he has a good crop, he’ll bring them to market to sell. Experiments are ongoing with cranberries, kiwi and hazelnuts, and Price recently erected a fence to keep out marauding woodchucks. Chan’s answer to the invaders is to cook them for dinner.

How do they eat them? “With vengeance,” replies Price.