Pedal to the Nettle

What do you do when your restaurant is more than a stone fruit’s throw from the Union Square Greenmarket and you want to haul a couple hundred pounds of produce back without resorting to a so-last-century fossil-fuel burning vehicle?

If you’re Christophe Hille, an owner of Northern Spy restaurant in the East Village, you turn to your trusty Yuba Mundo extra-long cargo bike.

“We’ve had up to 200 pounds on there,” says Hille of his retro-looking ride, outfitted with custom-built panniers made of heavy-duty nylon, one on each side and one across the back. A traditional breadbasket in the front rounds out the bike’s impressive storage capacity.

It’s not just for produce, either: The Mundo has hauled 200 pounds of planting soil, a mess of whole striped bass, a four- by three- by two-foot set of metal shelves from the Bowery, even three bushels of apples to Foley Square to distribute to Occupy Wall Streeters in 2011.

Hille says he was inspired by his circle of West Coast friends who are, as he puts it, “heavily
involved in the cargo bike movement,” and went with the Yuba brand because it has the greatest cargo capacity. Spring is easy, says Hille, since greens are light. By high summer, when weightier tomatoes and melons fill the markets and his menu, Hille needs his Haley Tricycle, fitted with a storage box on its back that he says can easily carry 400 pounds.

In a city famous for gridlock, he raves about the utility of mobility. “If [equipment] breaks down at the restaurant, we can be on the Bowery in five minutes. When we cater small lunches at NYU or J. Crew, we just pack everything on the bike…we can get across town cheaper and faster and with more stuff than in a car.” 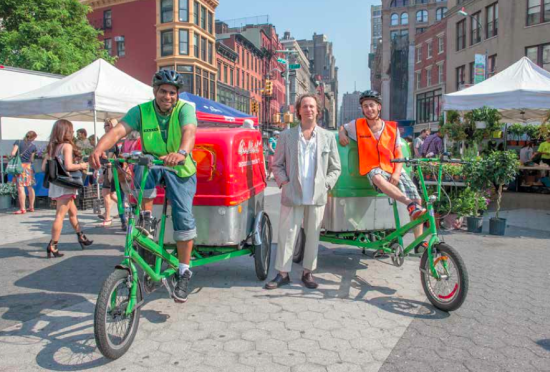 The patriarch of produce-pedaling chefs is Peter Hoffman, who has been biking purchases back from the Greenmarket since he opened Savoy (now Back Forty West) in 1990. Hoffman says loading up a bike spares you the hassle of hauling your purchases to a crowded curb and hailing a cab. Moreover, he’s not burning any fossil fuels, which is in keeping with why he shops at the market in the first place. “My personal life is political in some ways,” he says. “These are my values, this is how I live.”

Just about the time he outgrew his two-basket capacity, he happened by a cargo bike parked on the street. He left a note on the bike inquiring about it, and later learned it belonged to George Bliss, the bicycle evangelist who runs the West Village cycle shop HUB (Hudson Urban Bicycles). “George sort of rented the bike to me for the season for a ridiculously small amount, like $10,” Hoffman recalls.

Eventually Bliss connected Hoffman with the maker of the bike, Jan Vander Tuin, a Eugene, Oregon–based bike builder and community organizer who Hoffman says may or may not have started the country’s first CSA. The chef commissioned a custom 30-inch container to allow a wooden crate of apples to “fit snugly next to one of those plastic stacking flats that farmers use,” Hoffman explains. He’s packed eight cases of wine, or about 250 pounds worth of cargo in the basket, and notes, “It’s actually not very hard to ride; it has a low center of gravity.”

Hoffman’s wife, Susan Rosenfeld, pedals supplies between the two Back Forty locations three days a week; her bike has a Burley trailer attachment, the little tent-like structure often used to haul toddlers, although lately she’s been forgoing that to helm her husband’s cargo bike. Pastries are her main cargo, but Back Forty does its own in-house butchery, and she’s ferried everything from giant stock bones (usually attended by a pack of dogs trailing after her in Tompkins Square Park) to a whole pig. Once, she recalls, she had detached and locked up the Burley trailer when the Back Forty prep cook informed her he had 30 pounds of ground meat to get to Back Forty West pronto. Harried and in a hurry, she wrapped the package loosely in plastic to camouflage its contents, threw it on the back rack of her personal ride, a Cannondale, and set off across town again.

“I didn’t have a bungee chord, so I just tied it with string,” recalls Rosenfeld. The bag flew off, and her exposed cargo began to attract curious stares. “A woman dressed in wonderful East Village style stopped me and said, ‘Can I take a picture of that? That’s not something you see every day.’”

City Bakery’s owner, Maury Rubin, brought bikes into his Chelsea-based business in 2005 when he moved the pastry kitchen to First Avenue and 13th Street and turned that property’s vacant storefront into his first green, sustainability-focused bakery, Birdbath. As part of that eco effort, he threw in a 50 percent discount for customers who arrived via bicycle. Little did he know how avid and numerous bike enthusiasts were: Soon he was getting dozens of cyclist customers a day. 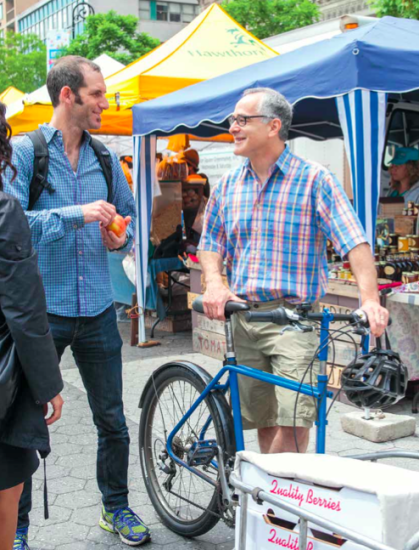 “It was the best bad problem that a new bakery could have,” recalls Rubin, “but I learned the power of bicycles.”

Rubin, who has long scrutinized the eco impacts of his ingredients, soon went for low-carbon transportation, too, by buying a bicycle rickshaw to transport pastries from First Avenue to City Bakery HQ on 18th Street and his additional Birdbath outposts. Over time, he eliminated one of his two vans and replaced it with two more cargo rickshaws and two standard bikes with baskets. During high harvest season at the Greenmarket, the bicycle rickshaws also pick up all City Bakery’s produce purchases. Last year, Rubin’s bikes traveled about 7,500 miles delivering among the four downtown Birdbath bakeries, all located within a 2.2-mile radius. This year he anticipates logging between 10,000 and 12,000 miles. Rubin also encourages biking among his staff; he’s partnered with Bicycle Habitat to create an employee rebate/incentive and rewards program of deep discounts at the Nolita store (known for its bike advocacy). He even supports the organization Transportation Alternatives with in-kind donations.

Marc Meyer is of like mind. The chef and co-owner at Five Points, Hundred Acres and Cookshop, he keeps a Babboe Dutch cargo bike kitted out with a deep wheelbarrow at each of his restaurants. He first spotted them at George Bliss’s Hudson Urban Bicycles. An avid cyclist, Meyer himself owns a single-speed Jamis Sputnik, a modified Surly Cross-Check and a custom-made bike. Five Points chef de cuisine Harris Mayer-Selinger, who does Greenmarket runs four days a week, admits the schlep requires some skill: “We take some big hauls, and it can be quite a balancing act.” At his most heavily laden, Mayer-Selinger describes a pile of produce in the barrow “two feet above my head, with sacks in each hand.” Plus while cucumber and eggplant don’t mind tight quarters, delicate strawberries, apricots and peaches can be accidentally smushed in just a few blocks. As he puts it, “there’s an art to packing.” He uses bungee cords to secure the load, “or just our prayers.”