We revisit a Chinatown tour we took a few years back with the new Jimmy’s No. 43 chef. 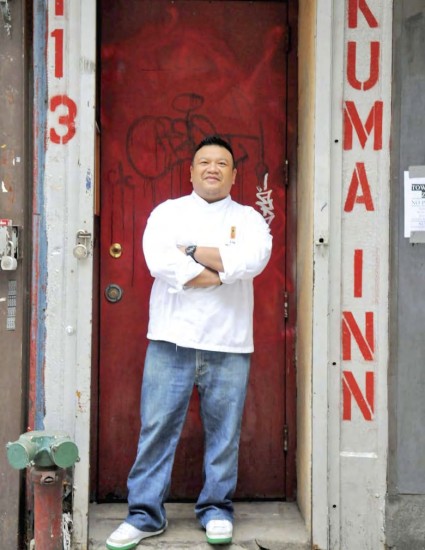 Chef King Phojanakong of Umi Nom and Kuma Inn is everywhere all of a sudden: He’s a major force behind Greenmarket’s acclaimed new serrano hot sauce and he just collaborated with Jimmy Carbone to redesign the menu after beloved underground bar Jimmy’s No. 43 closed for a period after the East Village fire. The new menu, renamed Tito King’s Kitchen, features accessible Thai and Filipino street food.

Tito King’s Kitchen at Jimmy’s offers pork belly adobo tacos with chili lime sauce, fries with pork, mayo and bonito flakes, and an option to order an entire Filipino-style roast pig for parties of 8 or more with a bit of advance notice. The latter is reminiscent of Pig Island, another Carbone event (set for September 12 this year) that helped solidify their friendship over the years. Phojanakong describes the relationship succinctly: “Jimmy is a big fan of my food, and I’m a big fan of his bar.”

We took a walk around Chinatown with Chef King Phojanakong a few years back and enjoyed pho with the chef while he fielded phone calls from parents, lawyers, purveyors and even HBO. We’re looking forward to his next big project.